"Pacific Northwest Quarterly is the leading scholarly journal devoted to the history and culture of the northwestern United States, Alaska, and western Canada." And now they have a website. 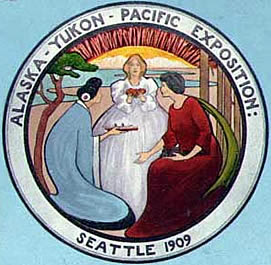 The collection of full text "sample articles" is disappointingly stingy, but the curriculum materials for teachers are quite good, and the annotated resources page is full of Northwest history linky goodness.

Traditional print journals have been taking their time deciding on how to position themselves on the internet. Of the more important Northwestern journals, only one has a particularly robust web presence. Montana: The Magazine of Western History offers no articles at all online. Nor does the Pacific Historical Review. The Oregon Historical Quarterly site does not seem to have been updated in years--one tab boasts the headline "Announcing the 2005 Joel Palmer Award winners" though a few fine articles are 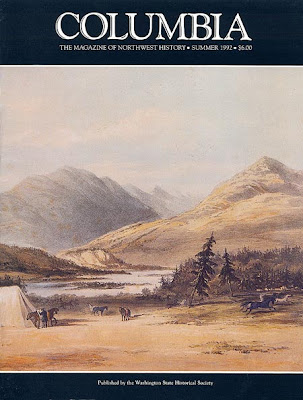 By far the best web presence for Northwest history publications is that of the Washington Historical Society's Columbia Magazine--which features quite a few articles in full text. And I must say, some of them are superb. But that is another post.

Update: Commenters on this post point out that the Oregon Historical Society will be launching a new website this week, and the the PNQ website is not as new as I thought. Thanks you for the information and corrections.
Posted by Larry Cebula 3 comments: Links to this post

A Poem by Tom Wayman

Did I Miss Anything

Question frequently asked by
students after missing a class

Nothing. When we realized you weren't here
we sat with our hands folded on our desks
in silence, for the full two hours

Everything. I gave an exam worth
40 per cent of the grade for this term
and assigned some reading due today
on which I'm about to hand out a quiz
worth 50 per cent

Nothing. None of the content of this course
has value or meaning
Take as many days off as you like:
any activities we undertake as a class
I assure you will not matter either to you or me
and are without purpose

Everything. A few minutes after we began last time
a shaft of light descended and an angel
or other heavenly being appeared
and revealed to us what each woman or man must do
to attain divine wisdom in this life and
the hereafter
This is the last time the class will meet
before we disperse to bring this good news to all people
on earth

Nothing. When you are not present
how could something significant occur?

Everything. Contained in this classroom
is a microcosm of human existence
assembled for you to query and examine and ponder
This is not the only place such an opportunity has been
gathered

but it was one place

And you weren't here

From Tom Wayman, Poems
Posted by Larry Cebula No comments: Links to this post

Eyak language dies with its last speaker--or does it? 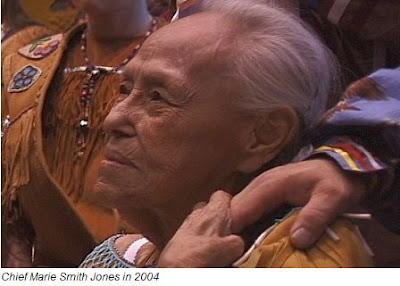 From the Alaska Public Radio Network: Eyak language dies with its last speaker. "The last traditional speaker of the Eyak language died yesterday, making the language extinct. Eyak Chief Marie Smith Jones was 89 years old. She was the last person to have learned the language the traditional way, taught as a child from her parents." (click on the icon at the bottom of the story to listen to the full report).

But as is often the case with these maudling media stories, there is more here than meets the ear. Marie Smith Jones spent some of her last decades working with linguist Michael Krauss to record and document the Eyak language, and the language is being taught to Eyak youth through The Eyak Language Preservation Project. This Seattle Times obituary has additional information about Marie Smith Jones and the Eyak. 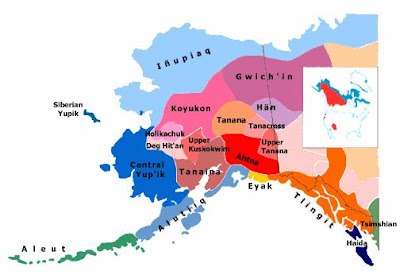 Map from the Alaska Native Language Center
(Most of the links above are lifted from this Metafilter post.)
Posted by Larry Cebula No comments: Links to this post

The Atlantic Opens its Archives

...well, the last twelve years of its archives anyway. I have subscribed to the Atlantic forever and often use articles from the magazine in my history classroom. A few treats relevant to the

interests of this blog: Saving Salmon, or Seattle? by James Fallows; Flouting the Convention (about whaling with a look at the Makah) by William Aron, William Burke, and Milton Freeman; an interview with Sherman Alexie; The Diffusionists Have Landed (concerning theories of precolumbian migration) by Marc K. Stengel; The Profits of Doom (the mining legacy of Butte) by William Langewiesche; the controversial On the Rez by Ian Frazier, and 1491 by Charles Mann. The last two were later expanded into books.

This follows the New York Times opening its entire archive (Back to 1852!) last year. As click ads become a realistic and significant revenue stream watch for more password protected sites to drop the subscription model in favor of open access.
Posted by Larry Cebula No comments: Links to this post 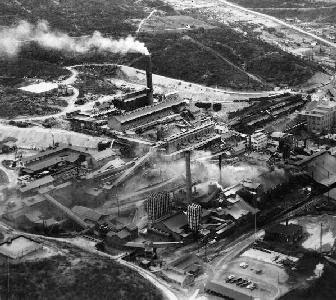 community: "Night-life decisions in Kellogg are basic and limited. If you smoke, grab a drink at Dirty Ernie’s. If you don’t, try the Jackass Saloon, where city council campaigns can start over frosty mugs of microbrews. Most of Uptown Kellogg has yet to recover from the economic shock of the 1980s and 1990s, with several storefronts and historic buildings still boarded up. Then there are the poisonous metals . . . " (The picture on the left is of the smelter at the Bunker Hill Mine.)

The whole Silver Valley is a fascinating study in mining, the environment, and modern redevelopment in the west. The valley boasts the Cataldo Mission, the oldest building in Idaho, and was part of the route for the Mullan Road, an important early transportation route. The late 19th and early 20th centuries saw the boom and eventually bust of a series of deep silver mines in the valley, which left behind one of the larger Superfund sites in the nation. Yet, despite the widespread lead contamination, the area is also one of the most beautiful in the Pacific Northwest, and has fantastic recreational opportunities. One of the neatest examples of this redevelopment is the 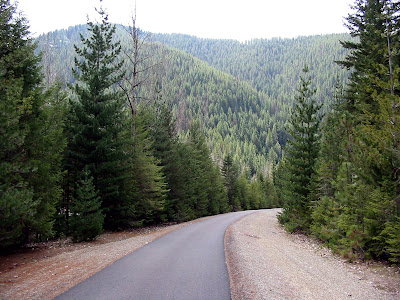 Trail of the Coeur d'Alenes bicycle path project (photo on right) which encased 72 miles of lead contaminated railway line in an impervious clay cap and put a stunning bicycle path on top of it.

Here also is an NPR story about the revival of the Silver Valley, and a an article from Boise State University, "Kellogg Redefined: A Mining Town Reinvents Itself."
Posted by Larry Cebula No comments: Links to this post

How many men do you need to recreate the 60,000 man amphibious landing at Omaha Beach? Why three, of course:

The rapid proliferation of Photoshop and similar programs has led to wealth (or a plague?) of altered historic photographs. How far are we from an equally widespread ability to alter moving images? Somebody is surely working on the Zapruder film right now, putting Hillary on the grassy knoll...

(I also posted this at Metafilter where a good discussion ensued.)
Posted by Larry Cebula No comments: Links to this post

The American Historical Association Blog features an interesting post today: Digital History at the Annual Meeting. The post by Elisabeth Grant focuses on and summarizes three digital history sessions from the conference, complete with links. I attended two of the three sessions and my only quibble with the summary is when Grant describes Session 31: Tech Tools for Historians as a "poster session-like gathering." It was, but only because some technical problem prevented the panelists from presenting as planned. I think that the digital projector never showed up. In any case they were inspiring sessions and Grant provides an excellent write up.
Posted by Larry Cebula 2 comments: Links to this post

Indian Sentinal: "The Indian Sentinel featured articles about Native Americans across the United States and their evangelization by the Catholic Church. Most were 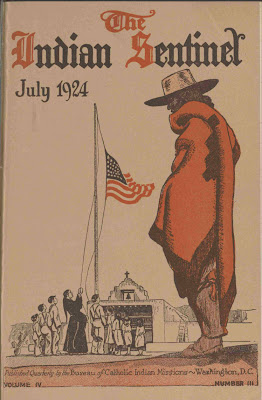 first-hand accounts by lifelong missionaries in the field that were often illustrated with photographs they had taken. Also featured are articles, essays, and letters by Native Americans, many of whom were students in Catholic schools."

Indian Sentinal is a another great digital collection from Marquette University, which also hosts the Jesuit Relations. The magazine is a treasure trove of primary source information about native peoples from Maryland to California--and of course the Northwest. A search for "Spokane" for example turns up 89 articles from 1906 to 1962. Catholic missionaries worked with many or even most Northwest tribes in the 20th century, so most are represented.
Posted by Larry Cebula No comments: Links to this post

Researching the PNW by way of California 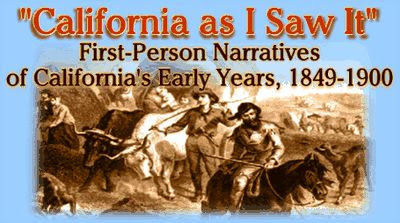 "California as I Saw It:" First-Person Narratives of California's Early Years, 1849-1900 is one of the topical collections from the Library of Congress' American Memory site. Northwest historians know that the early histories of California and the Oregon Country were intimately connected. The wagon trail west from Missouri was the California-Oregon trail until the paths parted ways in Missouri. The California Gold Rush drained off much of the white population of the fledgling Oregon Territory, and when the gold didn't pan out many a failed California miner found his way to Oregon.

So it is no surprise that "California as I Saw It" has a substantial amount of Northwest material. A search for "Oregon" under the descriptive information box reveals 11 documents, including The Gold Seekers of '49 by Kimball Webster, a New England forty-niner who ended up a surveyor in Oregon, and Recollections and Opinions of an Old Pioneer by Peter H. Burnett, an important figure in the government of early Oregon. A full text search turns up an even 1oo references to Oregon throughout the collection.

I was going to analyze one of those references here--and amazing and perhaps unlikely story about an elderly Klamath man. But the tale deserves a post of its own.

(By the way, the "special presentation" Early California History: An Overview offers a decent thumbnail history of the state.)
Posted by Larry Cebula No comments: Links to this post

Off to the AHA

I leave in the morning for the 122nd Annual Meeting of the American Historical Association in DC. Being an Americanist I have never attended the AHA before, but I thought it was high time I became less provincial. And there are some terrific sessions on digital and public history.

Perhaps I will blog some of the sessions!
Posted by Larry Cebula No comments: Links to this post