Northwest History Films from North of the Border


Voyageurs ,The, National Film Board of Canada

The National Film Board of Canada has hundreds of movies online. You can stream them for free or pay for a download or DVD. The films are both historic and contemporary and cover an array of topics, including history (here is the history page). Above is a 1964 film, The Voyageurs.

There is a lot of northwest content here, with additional films on the fur trade, Red River, and native peoples of the Canadia northwest. Enjoy.
Posted by Larry Cebula No comments:

In Which Tracy Rebstock and I are Interviewed

Just a Theory is a local public radio interview show, hosted by ridiculously entertaining EWU faculty member Tony Flinn. Each week Flinn interviews professors, either from EWU or a lesser institution, about their research. I have always wanted to be a guest on Just a Theory, but I am not accomplished enough.

This week however I was able to ride the coattails of my superb former graduate student, Tracy Rebstock, and be on the program. Rebstock's MA project in lieu of thesis was to tell the history of Spokane's parks in a series of stops for the Spokane Historical mobile app. Flinn saw Rebstock present her work at the EWU Creative Works Symposium and asked her to appear on the radio program.

Flinn interviewed two student/professor teams, Rebstock and I begin at 15:06.

Cromwell Dixon was an important early aviation pioneer. As a teenager he flew homemade dirigibles at airshows across the U.S. In 1911 at the age of 19 he was awarded the 43rd pilot licence in the country, and just months later became the first person to fly over the Rocky Mountains. He was fresh from that triumphs when he plunged to his death performing at the Spokane Fair later that year.

I learned of Dixon from Jon Gibbs, a user of Spokane Historical, the EWU smart phone app for exploring local history. From contemporary news stories Gibbs was able to find the precise location of the crash--it happened between two sets of railroad tracks near the intersection of Trent and North Fiske Avenues in the Valley.

Gibbs first learned about Dixon from this segment of  History Detectives (transcript here):

Thanks for the tip, Jon! This is the just the kind of great, forgotten local story that we are looking for to include in Spokane Historical.
Posted by Larry Cebula No comments:

So he does not have a PhD in American history--take a listen to my man Sullivan for a moment:

I think that Sullivan is almost certainly correct. Lincoln shared a bed with Joshua Speed for years, long after both me could have afforded beds and rooms of their own.You will often hear this explained away as a common practice back in the day, and at crowded roadhouses or in army barracks this was true, but it was absolutely not common with two rising professionals who could have easily afforded their own rooms. And Lincoln also shared a bed with a man, Captain David Derickson, in the White House when he was president. There were rumors of homosexuality (though the term did not yet exist) during Lincoln's life. If it were any other 19th-century figure, we would take the same set of evidence as at least indicating a strong possibility that the subject was gay.


I am very much reminded of the sexual relationship between Thomas Jefferson and Sally Hemmings. Despite abundant evidence that the two had a long sexual relationship that produced children, the very idea was rejected outright by the Jefferson historical establishment until modern DNA analysis made it undeniable. Racism served as a historical blinder to seeing the truth that was right in front of us. The same is true of homophobia and Lincoln's gayness.
Posted by Larry Cebula 2 comments:

It is summer, I have a book manuscript to finish, so for the rest of the season I will be posting videos and silliness. Deep thinking will resume in the fall.

I had heard about the Crash Course in World History videos a ways back, but unthinkingly dismissed them as some cartoon-y gimmick. I got around to actually watching one yesterday, and it turns out they are really good. A little background here. Their YouTube channel features 24 world history videos, with topics from the Indus Valley Civilizations to the video below on the Columbian Exchange:

The videos are so much better than I expected, with up-to-date historical interpretations, good production values, and wit. They would be excellent in the high school or even college classroom as an activity to build student interest. I could do without the cinnamon challenge in the middle of the Columbian exchange, but then I am not the target audience. Enjoy.
Posted by Larry Cebula 1 comment:

Many of you will have seen this before, but what the hell:

Why Come There Ain't no black People in Mayberry?

There is a real historical point to be made here. The Andy Griffith Show ran from 1960 to 1968, at the very height of the Civil Rights movement. For millions of white Americans part of the appeal of the show was its nostalgic portrayal of an idyllic South, one without bus boycotts or sit-ins or indeed any black people at all.

How did I find this? Well, today Kevin Levin over at Civil War Memory posted a little clip from The Andy Griffin Show in which it is revealed that no one in the town of Mayberry seems to know what the Emancipation Proclamation might be. Well why should they, I thought, there were no blacks in Mayberry. Suddenly it occurred to me how strange it was that the most popular TV series ever set in the American south didn't have any black people. Or did it?

I Googled up this defensive fan FAQ: "There are MANY towns in the south without black people. Also, you are wrong that there were no blacks in Mayberry. If you watch the people in the background, you'll see several black townspeople walking down the sidewalk and being a part of town."

That FAQ included a link to the delightful African-Americans in Mayberry page, where some fellow posted a bunch of screen captures, mostly of street scenes in which some black person is walking past the main character. Red arrows helpfully point out the passing blacks, as we see below: 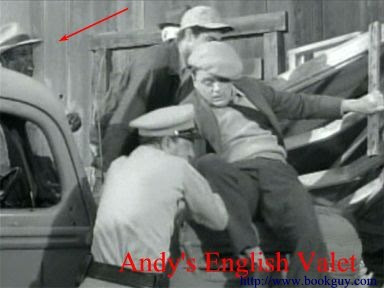 For much of American history, the private papers of historically significant individuals usually found a home in a publicly accessible archive--when they were preserved at all. Government archives, historical societies, university archives, and sometimes libraries preserved the papers of the movers and shakers. Some few historically significant collections have found their way into private hands, but this was the exception rather than the rule.

So it is distressing to see the Elizabeth Bacon Custer manuscript collection going up for auction. From the description provided by the auction house, this is a huge and historically important collection, and one that has "never been scanned, copied or cataloged" according to the brochure from the auction house Williams & Williams. The collection includes three dozen binders of material, including letters between Libby and George Custer, her research notes and manuscripts for her books, transcripts of Custer's Civil War letters, and "the Custer's personal collection of stereoviews from the 1874 Black Hills expedition." Who even knew the latter existed?  The brochure gives tantalizing hints that there is blockbuster material in this collection as well:

Libby Custer spent the long decades of her widowhood building up the myth of her late husband George Armstrong Custer, who was in truth something between a questionable officer and a genocidal maniac. Libby lived until 1933--six decades after the Battle of Little Big Horn--and devoted much of that time to writing, giving talks, and promoting a view of her late husband as an almost Christ-like figure who had given his life so that (white) others might live.

However, there have always been signs that they were a much better couple after the General died than they were when he was alive. Rumor has it that this collection includes letters where George Custer threatens Libby with divorce on account of her alleged infidelity, among other items. A friend made inquiries and the starting price for the Libby Custer Collection is a quarter-of-a-million dollars. To even look at the collection you need to put down a $25,000 deposit and sign a non-disclosure agreement. Williams & Williams is marketing the material as not merely a collection but as a scoop.

What will happen next to the collection? If the historical community is fortunate, the buyer will be a well-funded private but publicly-accessible archive, and the Libby Custer Collection will become available to researches. At these prices, it seems more likely the collection will end up in private hands.
Posted by Larry Cebula No comments: