A Surprising Glimpse of Gay Spokane from 1976

A quick post to highlight a really interesting newspaper article that one of my students, Logan Camporeale, discovered in a 1976 issue of the Spokane Chronicle: "Homosexuals Expose Conditions in Spokane As They Plan for Halloween 'Queens' Ball."

I began reading it with some trepidation, expecting ugly stereotypes and dismissive language, and was surprised to find instead a very sympathetic article that used the upcoming drag queen contest to give voice to at least some of Spokane's gay community from 40 years ago. It is interesting that Spokane seems to have regularly hosted such events with up to 1,500 in attendance, that there was a gay part of downtown with multiple bars, and that at least some gays were speaking on the record about their problems and their goals, including marriage equality.

Go ahead and read the article yourself if interested. I did a quick search for some keywords and for the reporter, Lew Pumphrey, and did not come up with any similar stories.

A great resource for delving further are the oral histories gathered at Spokane's Pride, an ongoing project of my EWU colleague Dr. Laura Hodgman. A portion of an interview with Leonard Mace addresses coronation balls like the one in Spokane, for example. And this interview with Gene Otto provides a less-rosy view of the relationship between the Spokane Police Department and the gay community than we read in the Chronicle piece.

Reading this, you can get a feeling that at least some Spokane gays were very optimistic about their future in 1976.  With the great strides that blacks and women had made in the 50s and 60s, they probably thought it was their turn. Little did they know that it would be almost four decades before marriage equality would come to Spokane.
Posted by Larry Cebula 3 comments: Links to this post

I continue poking around in the history of Indians in the Spokane area in the decades before and after 1900. This period, after the Indian Wars but before the regular confinement of Indians to reservations, seems understudied, yet with a rich set of primary resources. I hope to eventually write something substantial on the period, but until then, I will use this blog to record the little nuggets of information I discover.


Today, I was looking for something else, and came across this story in the November 21, 1904 issue of the Spokane Press: 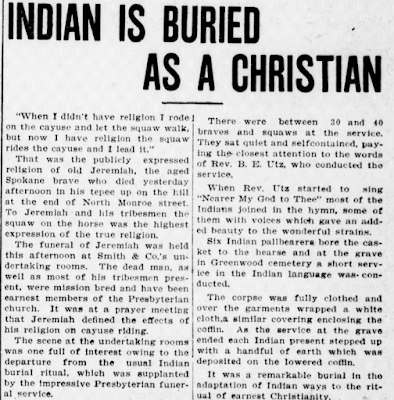 Obviously, the story is condescending and borderline racist, but it has a lot of information as well. Jeremiah lived "in his teepee up on the hill at the end of North Monroe Street." I could not easily find a 1910 map of Spokane online, but this detail from a 1920 map show North Monroe ending around Cora. This is just a few blocks east of Drumheller Springs, a traditional native campsite into the 1920s.

The funeral ceremony took place at "Smith & Co.'s undertaking rooms." I don't know where this was located, but presumably downtown. City directories would show the location. In 1912 the firm built a Baroque Revival building at 1124 W. Riverside that still stands today. After the Presbyterian funeral service--including the 30-40 Spokane Indians present singing "Nearer My God to Thee"--the coffin was loaded in a hearse and take to Greenwood Cemetery, where the natives conducted a ceremony in Salish. One wonders what they said. This page from local genealogist Maggie Rail shows the Jeremiah was in fact interred at Greenwood. This is notable as well, since Indian burials were not normally allowed at that cemetery.

This newspaper article caught my eye because I had read of Jeremiah before. The Washington State Archives, Digital Archives has Jeremiah's burial return, which includes additional information. Jeremiah's father was Polition (a well-known leader in his own right) and his mother was Albri. It is unusual that an Indian death record for this period to list the parents, and that itself might have been a sign of respect for Jeremia. The main revelation from this record, though, is the cause of death: 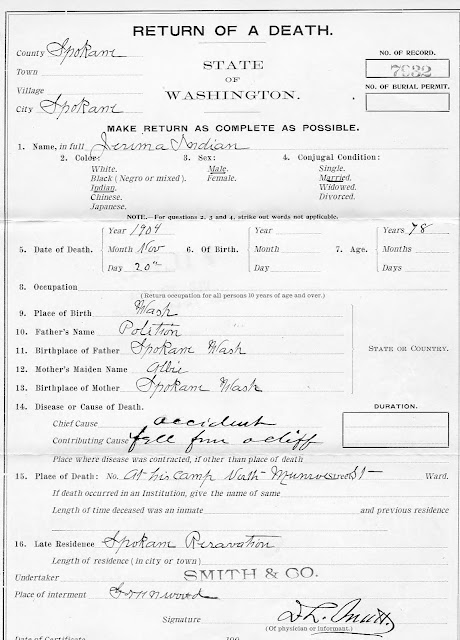 "Chief Cause: accident. Contributing Cause: fell from a cliff." The death return also notes that Jeremiah died "at his camp North Monroe Street" and that his late residence was the Spokane Reservation.

Together these two documents tell us a fair amount--they show a group of Spokane Indians who were Presbyterian but who still practiced some native rituals, who moved back and forth between the Spokane Indian reservation and the city of Spokane, and who had a regular campsite on the northern edge of town.

Here is something interesting I came across on YouTube today. "Northwest USA" is a documentary produced by the U.S. Office of War Information in 1945. The documentary seems to have been produced after the surrender of Japan in early August but before the closure of the Office of War information in September. This fairly dry documentary is no Why We Fight, but there are some interesting moments. There are the surprising pro-Moscow statements that reflect a wartime alliance not yet torn asunder. There are some interesting scenes of things like smelting metal at the Kaiser Plant in Spokane. And the last scene is precious, Rosie the Riveter marches right out of the factory with the bandana on her head and a baby on her arm, ready to resume her proper role of housewife. Enjoy!