The Path of Totality: Pulling Meeting Minutes Out of the Shadows

On Monday, August 21st, 2017 the moon will pass between the sun and the earth casting a wide shadow over parts of the contiguous United States for the first time in nearly four decades. This unusual event, a total solar eclipse, will only be visible from the path of totality—a seventy-mile wide strip of earth that arcs across the United States from Oregon to South Carolina.

Skywatchers and armchair astronomers in the Pacific Northwest and beyond will flock to central Oregon in hopes that mother nature will offer a clear sky to enjoy the once-in-a-lifetime astronomical event. Nearly all reservable lodging options within the path of totality, including campsites and home rentals, have been booked. Cities and towns have been planning for the influx of people, holding town meetings and brainstorming ideas to generate revenue from the visitors. Stores are planning to stock up on the necessities and farmers are considering turning fallow fields into fertile campgrounds that they hope to rent for hundreds, or possibly thousands of dollars per site.

This is not the first time that the Pacific Northwest has fallen in the path of totality. In 1979, a total solar eclipse swept across Washington, Oregon, Idaho, Montana, and North Dakota before proceeding into Canada. The event, billed as the country’s final total eclipse of the century, generated a “solar mania” comparable to today’s excitement. Taverns in the path created specialty drinks like the “Total Eclipse.” And the Seattle Science Center chartered a plane to fly above the Columbia Gorge for a champagne-enhanced view of the eclipse with no chance of pesky clouds getting in the way. 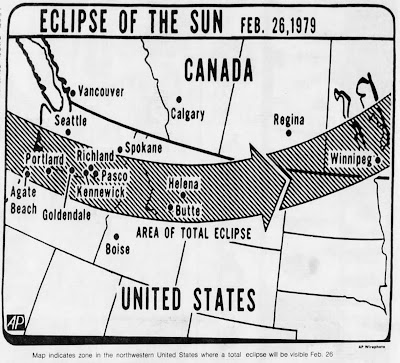 Keyword searchable newspapers are a useful source to understand how Pacific Northwesterners engaged with the last total solar eclipse, but they can be hard to come by. In fact, there does not seem to be any freely-accessible keyword-searchable Washington State newspapers from 1979. Not even a subscription service at Newspapers.com has anything. (Although it did provide some local details, the clipping above came from the Associated Press in a newspaper out of San Bernardino, California.) Fortunately there is another keyword-searchable collection that can help use to fill in the gaps and provide a more nuanced local perspective when newspapers are not doing the job.

The Minutes and Meeting Records Collection at the Washington State Archives, Digital Archives is made up of official accounts of meetings conducted by over two hundred local government agencies from the 1850s to the present. They are a running record of the most important business conducted by an agency. The records are completely keyword searchable and they provide a different window into the challenges of the eclipse in 1979. Instead of city councils and boards of commissioners laboring over how to accommodate an influx of visitors, as might have been expected, a keyword search for just the word “eclipse,” and then a handy date sort, shows that it was school districts that were talking about the event.

Unlike this year’s eclipse, the one in 1979 occurred in February well before children got out of school for the summer, and in the middle of winter when camping trips and others vacations were not as appealing. Instead of concerns about inundated cities and public lands, the records show that at least five school districts in Washington State had educators and administrators that were worried about the possibility of students damaging their eyes while trying to watch the solar eclipse on their way to school. The concerns were raised in public meetings, and in Vancouver School District an ophthalmologist was consulted to guide an action plan. Most school districts instructed teachers to educate their students about the risks of looking at the sun and agreed upon different start times to ensure that students were not walking to school when the event occurred—a practical local-level response to the eclipse, but not the one that was expected.

This is not an earth-shattering discovery shedding light on the long duree history of human responses to eclipses, but it is an interesting bit that fills in our understanding of how communities reacted to previous eclipse events. It also shows us how a simple change in the circumstances of these two events—the time of year—vastly changed the local response.

--
Using keyword searches of the Minutes and Meeting Records are an effective way to unpack local perspectives on national issues, and they certainly are not limited to the eclipse. For example, while trying to understand local impacts of forced relocation, searching the collection for the word “Japanese,” and then sorting it by date, revealed an organized effort to prevent displaced Japanese from resettling in their communities during World War II. The Grant County Commissioners were even in favor of establishing a concentration camp within the county to imprison those who were relocated.

Similarly, a researcher interested in the AIDS epidemic in Washington State would be handedly rewarded from a simple keyword search for the word “homosexual.” The query revealed that in the 1980s agencies like the Snohomish County Health District were actively engaged with the challenges their community faced with the spread of HIV. It was such a pressing issue that an “AIDS Update” was a recurring agenda item at their meetings.

As pajama-bound historians we often rely too heavily on keyword-searchable newspapers to understand local impacts of national events, even when keyword-searchable minutes and meeting records from local government agencies are readily available. As more states and local governments put their minutes online and make them keyword searchable, a deep chest of immensely valuable local history sources will become easily accessible to historians trying to understand local impacts of national events. Let the keyword searches begin.