This is a fun one. A couple of years ago, as a sort of experiment, I started a Facebook Group: Spokane History Buffs. I wanted a digital space where people who had a research interest in Spokane history could exchange information. And I was frustrated by the nostalgia Facebook pages like "You're Probably From Spokane If..." that specialized in an endless loop of "Hey Who Remembers Expo?" type posts (along with regular theft of intellectual property--but that is another post.)

The experiment paid off nicely. I have met a bunch of folks who have real expertise in local history and who I never would have met otherwise. And we have solved a few historical mysteries together.

Yesterday, a user named Josh at CityofSpokane asked the group a question:

Hi History Buffs. I recently acquired this 1932 map of Spokane County and found some handwriting on it that piqued my interest. An arrow points to an area just north of Fort Wright with the words "crash occurred about here" and another arrow points to a spot directly to the east of that with the words "area for spectators." The other two arrows point to Baxter Hospital and Fairmount Cemetery. Don't know what this is referencing. Might be completely insignificant but I thought I'd share. Thanks!

Josh shared a couple of pictures of his mystery map: 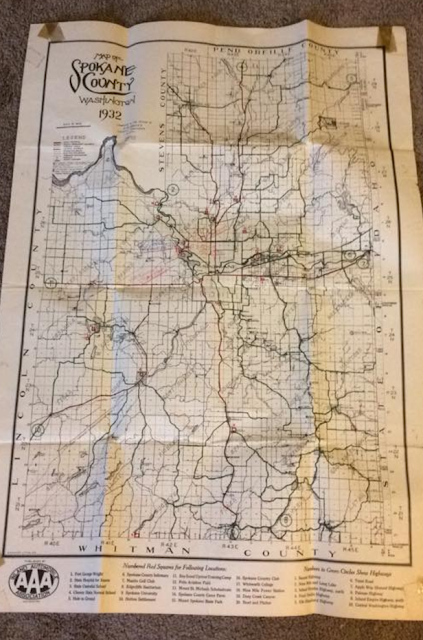 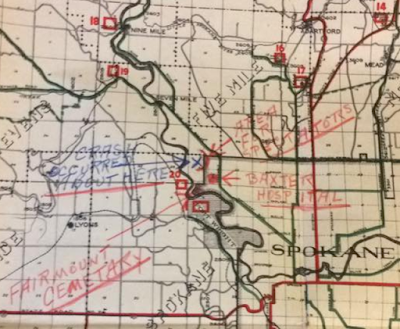 I quickly tried to Google up an answer (we get a little competitive at Spokane History Buffs) and came up empty. But group member Jeff Sims immediately recognized the map markings as referencing a 1944 crash during an airshow over Spokane. He shared a 2007 report on the crash from an aviation history site. The report, "Information on Observing the Location of the Military Air Crash the Occurred Near Spokane, WA, on July 23, 1944" by Darcey Hildebrand, is incredibly detailed.  It turns out a Paramount Pictures newsreel crew was on hand and filmed the whole tragic thing. Hildebrand took stills from the newsreel, images from Google Maps, and quite a few photographs he took himself to precisely pinpoint the crash location. Sample illustration from the report: 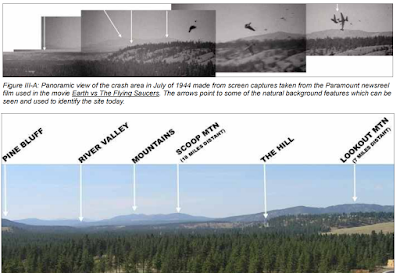 Hildebrand did some terrific detective work. He also mentioned that the Paramount film footage of the crash had been used in at least one feature film.

The crash itself was horrific. "Crowd Sees Two Planes in Fatal Crash at Air Services War Show" reads the headline in the Spokane Chronicle. "Before a stunned and almost unbelieving crowd estimated at 100.000, two of a formation of three army dive bombers came together in mid-air and crashed in a great ball of flame yesterday afternoon," the story continued. The show was to promote the war effort and the audience had been promised realism, so "some refused to believe that the sickening crash was not part of the show." The four men in the two planes were killed in a "rolling ball of flames and smoke." 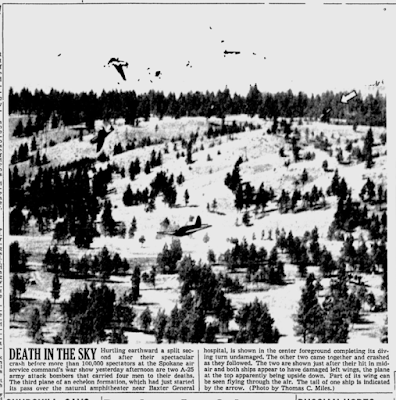 You can view the 1944 newsreel footage here on the Critical Past website--be warned, it is pretty disturbing.

And here is where the story goes from macabre to weird--and a little sad. In the days before CGI, a film director who wanted a dramatic airplane crash in a film was facing an expensive proposition. The choices were to do something with models, which was expensive and hard to film, or use misdirection. In the film Patton, for example, when director Franklin J. Schaffner wanted an airplane crash he filmed a plane flying behind a hill and then set off some explosives on the hill's backside. So this high-quality footage of plane crash in Spokane had real commercial value.

Behold the 1956 movie, Earth vs the Flying Saucers. Our Spokane plane crash is at the start of this clip:

One wonders what the widows and orphans and relatives of the four men killed might have though, when they wandered into the theaters a dozen years later and witnessed their loved ones being killed by UFOs?


(A big thanks to Josh at CityofSpokane for letting me use his map photos, and especially to local history expert Jeff Sims for cracking the case!)