For the last two months, I have been mulling over the best conference of my career—CampingCon 2016. The theme of the conference was “Public History in the Outdoors” and the format was--we camped. The conference occurred at Cade’s Cove campground in Great Smoky Mountains National Park.


But wait, you say, you can’t have a conference in a campground! What about Powerpoint? What about Starbucks? How did people present? WHAT ABOUT BEARS??!!
The conference agenda is here. Presentations took a variety of forms. Some folks presented their research in the form of a casual conference talk—working from a few notes, and perhaps using a map or circulating some handouts as they spoke. These took place at the picnic area (or under the pavilion on rainy Saturday morning.) It worked great, as the more casual atmosphere and intimacy encouraged questions and conversations.

Other presentation involved what I learned is “kinesthetic learning” or what you may know as “taking a walk." Brian Forist combined the two in his session on Two-Way Interpretation, first drawing out the audience in a guided discussion in the picnic shelter, then demonstrating the interpretive technique on a walk in the campground.

The most successful experiment was the hike and talks led by Aaron Ahlstrom and Jared Champion (and Caty the dog). We walked to the John Oliver cabin, and there we spoke about the 20th-century presentation of log cabins, scrape versus save preservation, and the fact that the restoration of this cabin was financed by Log Cabin syrup.

Then we walked another half mile to a spot where we could see the ridges on either side of Cades Cave. On a perfect and bugless afternoon, Jared Champion spoke of how Benton MacKaye’s sense of gender identity explains why there is no water along the Appalachian Trail through the park.
Our keynotes were campfire talks. On the first night Nigel Fields, Chief of Resource Education, spoke about interpretation in the park. On the second, we had a discussion of the assigned reading for the conference, the book Black Faces, White Spaces by Carolyn Finney. Dr. Tameria Warren facilitated the conversation over some difficult topics.

Sunday morning we gathered for a conference wrap up. We shared what we had learned in the two days of conferencing about doing public history in the outdoors. And then we discussed the format—what worked, what could be better. Most of all, we excitedly discussed future Camping Cons. Because it had quickly become clear that this was a replicable model, that just as THAT Camps went from a yearly conference to an international movement, so could Camping Con. 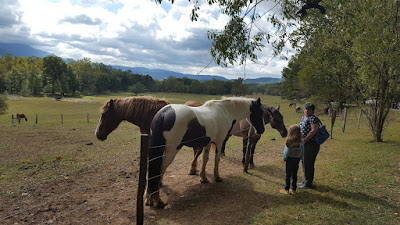 Dear Readers, who among you would like to help organize a Pacific Northwest Camping Con? I am thinking Mount Ranier--a storied site with close access to Seattle, Spokane, and Portland. But a Camping Con can take place anywhere with a group campground and some landscape to interpret. Mount Hood, the Oregon Coast, or the Columbia River Gorge have numerous sites where we could do a Camping Con. Whose with me?

"It's a Major Award"

Well look at that! I am pleased to announce that Spokane Preservation Advocates has seen fit to give its Historic Preservation award in the category of Public Education and Outreach to Spokane Historical. 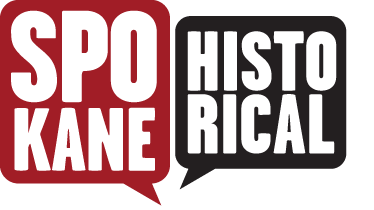 Some context: Spokane Preservation Advocates (SPA) is a citizen advocacy group that promotes historic preservation. This is no knitting club, the SPA are fighting preservationists. Their victories include saving a 100-year-old warehouse after everyone else, including city government, had assigned to the wrecking ball. Spokane Historical is the digital project that my students work on, it is a smartphone app and website for local history with over 400 stories.

It is a pleasant sensation to sit in a crowd of people of you admire while someone up front says nice things about you. But as I made clear when I accepted the award, Spokane Historical is not me, it is the collected work of more than 50 Eastern Washington University students who have researched and written stories over the last five years. It was an impressive set of awardees last night. Stephanie Petit won for her charming local history stories at the Spokesman Review. Iron Goat Brewing was recognized for renovated the old Jones Automotive building. And past SPA president Paul Mann was recognized for his many, many efforts, including bringing the National Trust for Historic Preservation conference to Spokane in 2012. And others as well--see the list here.

I am so grateful for this recognition. When we began Spokane Historical five years ago, I thought we'd work on it for a few years and move on. I mean, how many stories are there in this town? More than I could have imagined.
Posted by Larry Cebula 4 comments: Links to this post