I used this to kick off a great class discussion about the use of native symbols:

When historians of the Northwest gather together together it is only a matter of time before the ancient argument arises yet again: Who made the better documentary film of the Corps of Discovery? Encyclopedia Brittanica in conjunction with Emerson Films? Or the TV show The Simpsons? (Ken Burns? The name does not ring a bell.) This post will provide the reader with access to the primary sources for this important historiographic debate.

In 1954 Encyclopedia Brittanica films released Lewis and Clark, a 17-minute black-and-white movie for use in school classrooms. Their partner in the project was Emerson films, maker of many of those stilted movies that defined educational ennui for my generation. Lewis and Clark is a hoot! It is a standard romantic vision of the Corps of Discovery, with much unintentional campy goodness.

The most memorable part for me is an exchange between Lewis and Charbonneau at Fort Mandan. Charbonneau has raised his hand to strike his pregnant and bedridden wife Sacajawea when he is stopped by Lewis:

Clark: That is enough squaw man.

Charbonneau: Oh but of course captain. Still Charbonneau does not understand. She is but a squaw. Among the Indians she is less than nothing, at the most property and Sacajawea owes me much. She is a captured Shoshone girl who knows what might have happened to her if it had not been for me, a loving husband. But I am a weak man and can’t stand to see suffering.

Clark (angry): Her body is covered with the marks of your beatings!

Charbonneau (philosophically): Well I have shortcomings...

There is so much to analyze here. The portrayal of Charbonneau is a classic 19th and early 20th century caricature of the French traders and settlers who preceded the Americans to the west by generations. He is vain, lazy, cruel, avaricious and childlike. He has sacrificed his status as a civilized man to pursue his base impulses (note Lewis' deadly insult--"squawman") and it takes American ambition to get him out of the Indian village at all.

The other notable thing about the scene is the way Charbonneau characterizes the status of Indian women as " less than nothing, at the most property." He makes similar comments elsewhere in the film. This perfectly reflects the 19th and early 20th century view of native women as oppressed drudges who did all the heavy work of camp yet had no status or rights within their tribes. This ancient stereotype is what modern ethnohistorians refer to as "bullshit." Native woman held a lot of power and importance in most culture areas, including among the Mandans and Shoshonis portrayed in the film.

I also love the ending--Clark in a bathtub in Saint Louis, while Lewis stands over him in full dress but with great interest. Ah the 1950s, the last era of widespread unacknowledged

homoeroticism! Clark scrubs himself and says "We did it Mern and now I am going to get married. Judy Hancock, here I come." Given Lewis' apparent same sex attraction (here also), one looks for a leer or a wink on the actors face, but of course there is nothing like that.

York appears only very briefly, as a sort of Step-and-Fetchit caricature that ignores his real contributions to the expedition. Other problems with the film include a scene showing Fort Clatsop covered with several feet of snow and a lot of anachronistic late-nineteenth century speech.

Next: Blogging the Simpsons take on Lewis and Clark.
Posted by Larry Cebula No comments:

Ethnic Cleansing in the Northwest 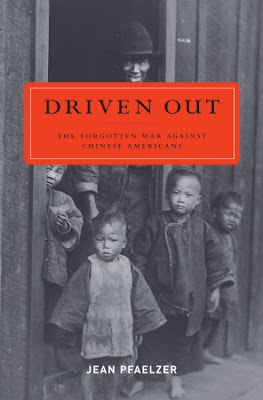 Jean Pfaelzer, American Studies professor at the University of Delaware and author of Driven Out: The Forgotten War Against Chinese Americans is interviewed this episode of the KUOW talk program The Beat. (Interview begins at 14 minutes.) This is a fascinating interview about an important topic. "The brutal and systematic “ethnic cleansing” of Chinese Americans in California and the Pacific Northwest in the second half of the nineteenth century is a shocking–and virtually unexplored–chapter of American history," according to the publisher page for Driven Out. "Driven Out unearths this forgotten episode in our nation’s past. Drawing on years of groundbreaking research, Jean Pfaelzer reveals how, beginning in 1848, lawless citizens and duplicitous politicians purged dozens of communities of thousands of Chinese residents–and how the victims bravely fought back."

Every Northwest historian is familiar with ugly events like the Tacoma (1885) and Seattle (1886) riots. But too few have seen this for what it was--part of a larger regional movement of ethnic cleansing (a term Pfaelzer is not afraid to use). There were over 200 violent anti-Chinese riots in the late 19th-century American West. Especially poignant is Pfaelzer's description of the Chinese women caught up in the riots. They had been kidnapped in the first place in China, forced to work often as prostitutes in the American West, and ultimately driven back to China by the ethnic cleansing of the American West.

Pfaelzer offers a valuable perspective that could be further expanded by examining other ethnic minorities in the West. To broad sections of 19th-century white America, the West was explicitly a land of opportunity for whites only. Other examples include the attacks on black Exoduster towns in Kansas, the deportation of Mexican and Mexican-Americans in the 1930s, and of course the confining of Indians into reservations.

At the same time it is important to tell the stories of these minority groups in ways that makes them historical actors, not just passive victims. Pfaelzer shows how many Chinese victims of riots used the court system to sue for reparations--and sometimes won. Chinese fought back, and that is part of the story as well.

(The KUOW website has an admirable search feature, and a search ofThe Beat archives for the keyword "history" reveals a wealth of intruiging programs.)
Posted by Larry Cebula No comments:

The Montana History Wiki is an interesting experiment in digital history. Established by the Montana Historical Society Research Center, the purpose of the wiki is to "assist researchers in finding the best resource for their projects or topics." There wiki is pretty bare right now but does have some valuable resources, such as a limited number of subject guides to Montana history (American Indians are not one of the subjects--tsk tsk) and a place for the Vertical File Index to the Montana Historical Society reference room--though this part of the wiki is empty as yet.
What, you may ask, is a wiki? According to Wikipedia (who should know): "A wiki is a collaborative website which can be directly edited by anyone with access to it. Ward Cunningham, developer of the first wiki WikiWikiWeb, originally described it as 'the simplest online database that could possibly work'." A wiki is an online document, or series of documents, that anyone with access may change and edit. It is one of those collaborative web applications that are sometimes called "Web 2.0" applications.

It is easy to see how useful this could be for researchers. If I went to the MHS looking for material for my research on Edward Curtis, and discovered that most of their material was duplicated at the Washington Historical Society, I could make a note of this on the MHS wiki. Subject bibliographies are another promising wiki application, where users could add to and annotate a bibliography concerning, say, tourism in Montana.

Wikis, especially Wikipedia, are controversial in the academy. The fact that anyone can create a Wikipedia acount then create new entries or change existing ones makes the entire project suspect according to some. What is just as bothersome is the fact that our students use Wikipedia anyway, all the time. A 2006 article in the Chronicle of Higher Education, "Can Wikipedia Ever Make the Grade?" (Google cache of article) seemed to answer its own questions with a "no." Other scholars, including this one, think Wikipedia has a place along other encyclopedias as a sometimes useful starting point for undergraduate research and a place to look up forgotten facts.

Like any collaborative project, a wiki is only as good as it collaborators, and for a project like the Montana History wiki to be useful it will require a lot of good collaborators. I wonder if the MHS wiki will attract large enough a community to make it work. I also wonder why the MHS did not simply incorporate what they wanted to do into the existing History of Montana pages at Wikipedia (which frankly could use a little scholarly attention.)

[Note: Here is a site about the pros and cons of presenting information in a wiki format. It is of course itself a wiki!]
Posted by Larry Cebula 6 comments: