The educational video game Oregon Trail was one of the first and most popular educational video games. My older kids played it when they went to elementary school in the early 90s. They brought a copy home (you could do that in those days) and I played it myself and thought, "Dang, this is really dumb!" Here is a short video overview. Anyway, if you ever played Oregon Trail the following will be hilarious:

Bonus picture after the jump:


In 2008 my son and I followed the Oregon Trail in a more (but not so very) modern prairie schooner, a 1970 Westfalia camper. I bought us these T-shirts to commemorate our trip: 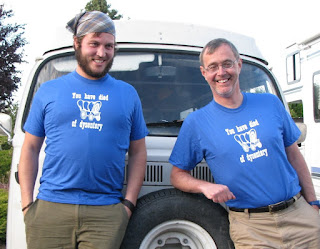 Off the Wall: Don't touch that dial!

I have joined the blogging team at the new National Council on Public History bog and here is my first post there: Off the Wall: Don't touch that dial!. Off the Wall promises to offer "critical reviews of history exhibit practice in an age of ubiquitous display." Check it out.
Posted by Larry Cebula No comments: Links to this post

I am an Associate Editor on the Papers Project and will try to blog about Cody--the man and the town--every day this week. The video above is of the gunfight that happens every evening at 6 during the tourist season. Tomorrow I'll get a bit more scholarly. Maybe.
Posted by Larry Cebula 4 comments: Links to this post