[Note: The following is a story I wrote for Out of the Archives the newsletter of one of my employers, the Washington State Archives. If you enjoy this sort of thing you may want to subscribe to the newsletter, which is free and which features fresh historical content every month!]


The Washington State Archives holds tens of thousands of historic photographs. Many have excellent provenance--we know when and where the photographs were taken, who is in them, what agency held them before they were archived with us. Other times, not so much. Caption: Convoy of Cars parked along Riverside Avenue displaying old City Flag,Spokane City Historic Preservation Office - Photographs, Washington State Archives, Digital Archives, http://www.digitalarchives.wa.gov.
Recently, Allie Honican, an EWU graduate student employee, brought this photograph to the attention of Assistant Digital Archivist Larry Cebula. A wonderful image, full of interesting details, it also had barely any information attached. The image is part of the Spokane Historic Preservation Office collection at the Digital Archives, and is dated “1900-1930.” No identification is made for the people in the photograph, or what obviously ceremonial event was taking place. (You can zoom in on the photograph at the Washington State Archives, Digital Archives here.)


They noticed, however, that the photograph includes many details that should allow historians to narrow down the date range. The location is obvious to any Spokane native--they are in front of the Spokesman-Review newspaper offices on Riverside Avenue. What else could we find out about the image?


Cebula shared the photograph on social media and the Internet Detective squad got to work. A friend with a strong knowledge of clothing styles though the image must be from the teens or early 20s. An automotive historian noticed that the automobile headlights were a mix of electric and carbide lanterns (towards the rear of the caravan), a combination that would have only been seen in the early 1910s. Another found a webpage with a history of the official Spokane flags, which revealed that the flag draped over an automobile in the center of this photograph was not used after 1912. The hero of the hour, however, was our own sharp-eyed Benjamin Helle, archivist for the Olympia branch of the State Archives. With a probably date range of the early teens in mind, Helle zoomed in on the lead car and recognized Governor Marion E. Hay sitting in the center. From there he identified Francis Cook as the man behind the wheel. Helle knew that Cook was instrumental in the creation of Mount Spokane State Park around this time. A bit more sleuthing and he came up with this front page of the Spokane Chronicle newspaper for August 23, 1912. “Winner, winner, chicken dinner!” Helle crowed. 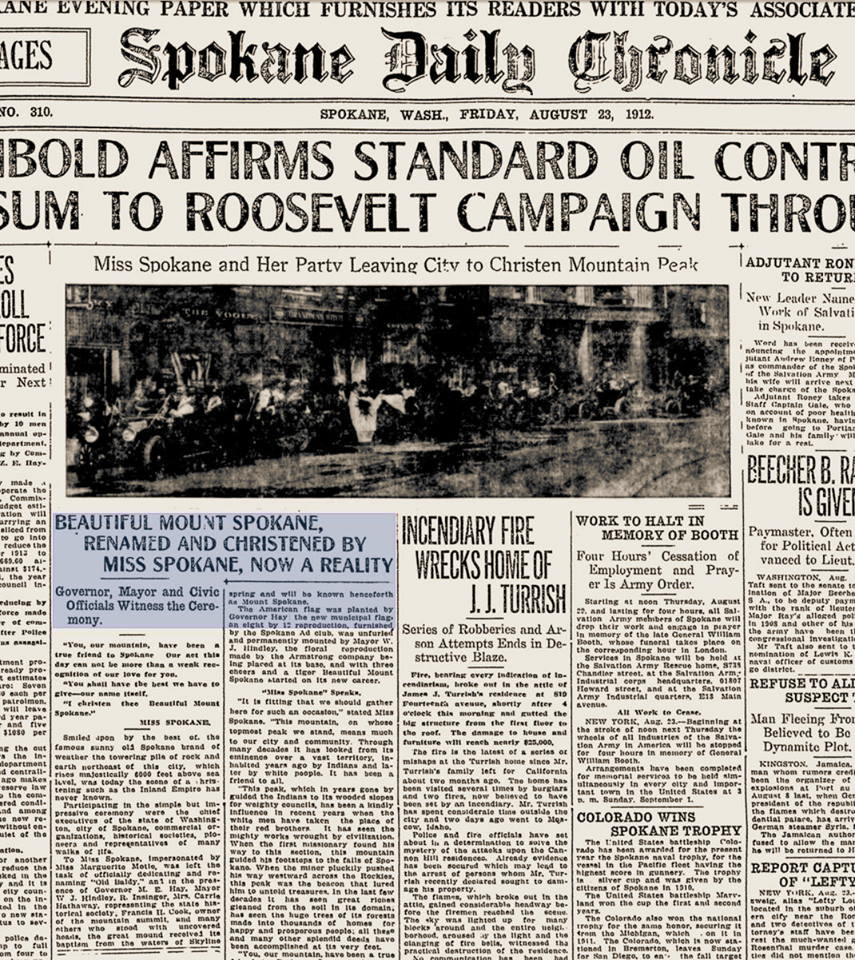 Cebula, who holds a joint appointment in the History Department at Eastern Washington University, decided that this was a teachable moment for his students. With the help of archivist Lee Pierce and EWU graduate student worker Logan Camporelle, he brought some students to the Eastern Region Branch, along with poster-sized print of the photograph. The students used city directories to look up the businesses seen in the background, finding what dates the Crescent Hotel, The Vogue, Graves Music Company and Grandma’s Kitchen were in business in those locations.


The “solving a mystery” aspect of the assignment drew the students in, even as they learned the nuts-and-bolts of doing local history research. They worked in teams to create a timeline for each business, and found that the photograph could only  have been taken in 1912 or 1913. From there Cebula lead them through some of the online resources and they were able to pin down the exact date as well.  “At first we didn’t think we’d be able to find out anything“ one student said, “but it was a lot of fun when we did!” 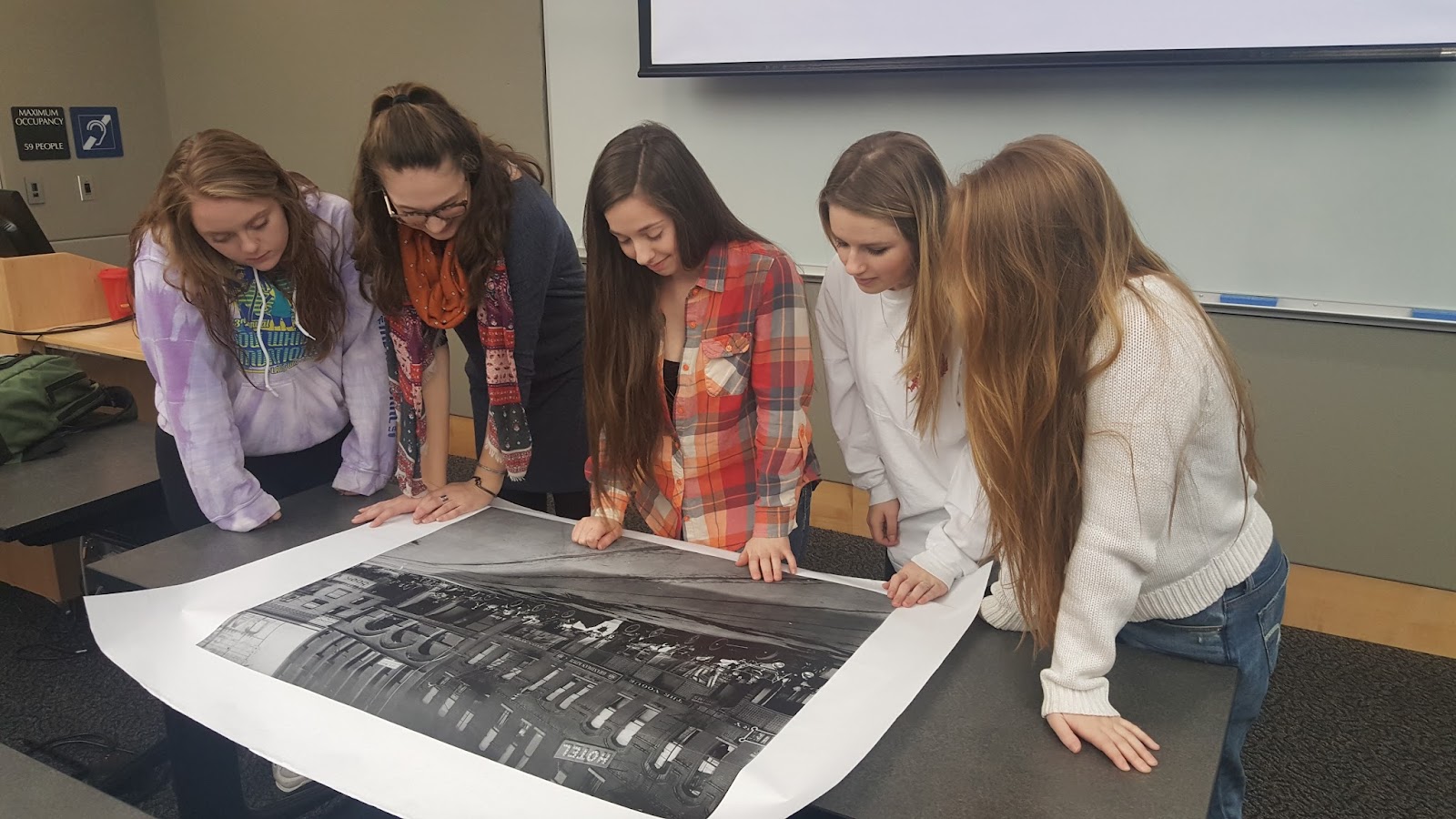 Camporelle added the background information to the image in the online user comments, and Digital Archivist Debbie Bahn will soon amend the record description to include the names and exact dates. That is one photograph fully accounted for--a few thousands or tens of thousands to go!

Sage Spirit - The American West At A Crossroads from Dave Showalter on Vimeo.


I wanted to make a quick post to inform Spokies of an upcoming event. I am going to be out of town so I am counting on you, dear reader, to attend in my place. Below is the description, including the details.

"Losing the West? Public Lands and Private Gain"
“Although the spirit of the American West remains an ideal to our national heritage,” says author and photographer Dave Showalter, “and many places remain wild and free, for the first time in our country’s short history, development has left many lands and waterways fragmented and scarred […] for short-term gains.”
Join Showalter and Paul Lindholdt, a professor at Eastern Washington University, for a discussion at the crossroads of the American West. Is a booming population and development bringing a new era of prosperity to the region, or permanently scarring the land that has so long captured the American imagination? In the era of Cliven and Ammon Bundy, how do we find a balance between public and private land use in the American West?
Speakers: Dave Showalter, nature photographer and author of Sage Spirit: The American West at a Crossroads; and Paul Lindholdt, professor of English at Eastern Washington University and author whose environmentally-focused work In Earshot of Water won the Washington State Book Award in 2012. Moderated by Shann Ray, American Book Award-winning author of American Copper.
When: 7:30 p.m., Wednesday, March 16, 2016
Where: Lindaman's Bistro, 1235 S Grand Blvd, Spokane, WA 99202
Posted by Larry Cebula No comments: Links to this post