"Craig, who was removed from leadership posts on the Senate Appropriations and Energy committees after a sex scandal, is known as one the most powerful voices in Congress on behalf of the timber and power industries. Environmentalists have fought him for years on issues from endangered salmon to public land grazing.

The explosion of internet sources for American history makes it possible to explore topics way beyond the obvious. Only a few years ago online historic investigations were limited to a few major archives (the Making of America, American Memory at the Library of Congress, and a few others). If you were willing to tailor your research to the topics available, you could investigate the writing of Thomas Jefferson or some other high-profile topic. And that was it.
How far have we come in the last few years? As an experiment in researching a secondary character in American history let us look for John Beeson. Beeson was an abolitionist and preacher, born in England in 1803 he migrated to America in 1832 and settled on a farm in Illinois--which he eventually turned into a station on the Underground Railroad. In 1853 Beeson, his wife, and son walked (!) to southern Oregon. There he became an outspoken proponent for the Indians during an era when Americans northwesterners did not particularly want to hear it. They ran him out of the state and he did not dare return for ten years.

Beeson was unloved in his day and has not received his due from modern historians--though he gets mentioned a lot. The internet, however, loves Beeson.

His brief, obscure, but wonderfully passionate 1857 book A Plea for the Indians is online, one of a number of historic documents hosted courtesy of the Friends of the Talent Library. A Plea for the Indians is a unique and compelling primary source in northwest history. "I would offer a few thoughts upon a subject which, as I conceive, has not heretofore received that just and impartial consideration which its importance demands," Beeson begins in a typically understated nineteenth century book introduction. Then he gets going. Beeson heaps scorn on his fellow immigrants, "many who have never been refined by either mental or moral culture" and their casual brutality "men are heard to declare their determination to shoot the first Indian they see."

Beeson's account is largely devoted to a condemnation of the Rogue River War and the treatment of Indians in the Oregon Country. "There were scores of men, assuming the prerogatives of sovereigns, who could not read, and yet made and executed law, and whose only idea of the Constitution of the country is, that is was made to keep down the 'Niggers.' Of course they understood it to have the same bearing upon Indians, and all others except 'white male American citizens,'" Beeson wailed.

Beeson is most powerful when writing about the gradual dehumanization of the settlers themselves as they grow hardened in their treatment of the Oregon natives:

The majority of the first Emigrations to Oregon were from Missouri, and among them it was customary to speak of the Indian man as a Buck; of the woman as a Squaw; until at length, in the general acceptance of these terms, they ceased to recognize the rights of Humanity in those to whom they were applied. By a very natural and easy transition, from being spoken of as brutes, they came to be thought of as game to be shot, or as vermin to be destroyed.

Other Beeson items online include four letters he wrote to the government and to newspapers to publicize the oppression of the Oregon Indians. These letters are a part of the California State University-San Marcos Native American Documents Project. The fabulous Oregon History Project has another Beeson letter to an eastern newspaper. In 1858 Beeson had fled east and delivered a sermon titled "The Natural Interests and Christian Duties Involved in Our Treatment of the Indians" according to this contemporary article from the New York Times. 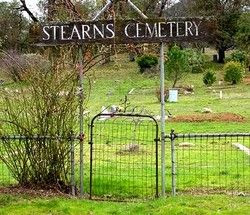 Beeson has a brief Wikipedia page with a one paragraph outline of his life. Find-A-Grave.com knows where Beeson is buried and povides the photo on the right. And while Google Books surprisingly does not have a full text version of A Plea for the Indians but a search for John Beeson uncovers every reference to Beeson by scholars.
Posted by Larry Cebula No comments:

This announcement from the New York Times--Times to Stop Charging for Parts of Its Web Site - New York Times--is being celebrated largely as the demise of Times Select, which was the NYTs scheme to charge extra for such "premium" content as Thomas Friedman's inane name-dropping. More significant to we bold historians however is that the Times has also opened up their online archives:

The Times will also make available its archives from 1987 to the present without charge, as well as those from 1851 to 1922, which are in the public domain. There will be charges for some material from the period 1923 to 1986, and some will be free.

What a boon this is to historians of the late-nineteenth and early-twentieth centuries--including historians of the distant northwest A search for Spokane, sorted oldest to newest, reveals the first use of the word in the Times in an 1858 story about the defeat of Colonel Steptoe: "The Indian Victory in Washington Territory." In a somewhat garbled report, the Times announces "The defeat of Colonel STEPTOE by the Indians is confirmed. The original statement was that he had been waylaid by a combined hand of Pelouses and Snakes, amounting to 1,500 warriors, and so routed." The Spokanes appear a little farther down:

A little nineteenth-century humor there. From the same search comes an 1877 editorial on the outbreak of the Nez Perce War ("It is quite likely that the first reports from the scene of the disturbances are exaggerated," the Times soothes) an 1883 article CHINAMEN SLAUGHTERED; THIRTY-THREE OF THEM KILLED BY A RAILROAD COLLISION, and this article about the Coeur d'Alene mines, "A New Eldorado."

For most of the older articles you only get the title and perhaps a few sentences in plain text followed by a link to a PDF of the original article. The Times server is robust, search results pop right up and the PDFs render smoothly. The Times archives are a major new digital resource for historians.
Posted by Larry Cebula No comments: 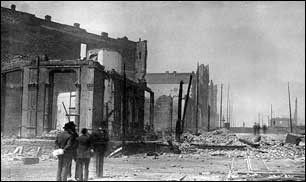 "The spring of 1889 in Seattle had been beautiful. There had been little rain, and temperatures were consistently in the 70s. Unfortunately, the unusually good weather proved to be disastrous, as the dry conditions conspired with a handful of other elements to allow for the worst fire in city history." Great Seattle Fire
is an impressive set of digitized archival resources at the University of Washington Libraries. There are 162 photographs of the city after the 1889 fire, tagged and searchable by keyword.
Posted by Larry Cebula 2 comments:

I am drifting again from NW history, but I do so love the movie 1776, I just had to share these video mashups that people have created and posted to YouTube:

Why Couldn't this have Broken on Talk Like a Pirate Day? 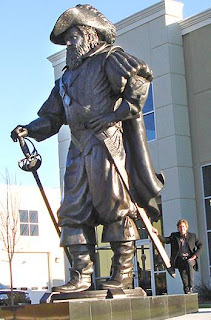 Newport was the captain of the Susan Constant, the largest of the three ships that carried settlers to the death trap new colony at Jamestown in 1607. Like a lot of the early English explorers he was half-pirate on his mother's side, engaging in a long career as a privateer raiding Spanish galleons in the Caribbean. He was influential in establishing the Virginia colony, not only in its initial settlement but in several vital resupply efforts. His fourth voyage to Virginia went amiss when his flagship, the Sea Venture, began to leak and had to be run aground on Bermuda to prevent her from sinking. The loss of supplies led to the famous "starving time" at Jamestown. (The event also marks the initial colonization of Bermuda and served as the inspiration of Shakespeare's play The Tempest.) Newport eventually died on the Indonesian island of Java in 1617.

It was during his privateer days that Newport lost his right arm in a fight with the Spanish in 1590. And yet the huge statue of Newport (presumably in 1607) shows him hale and hearty, with his right arm resting on his manly unsheathed sword. "We don't show our heroes maimed" was the explanation of sculptor Jon Hair (who from his website really does appear to be a bit of an ass). Local historians, not to mention disability advocates, are not amused. But at that point what could Hair say? "Ooops, I failed to do basic historic research on my topic before investing hundreds of hours and tens of thousands of dollars on my commission?" If Hair of anyone else in the project had so much as bothered to visit the Wikipedia page for Christopher Newport they would have been greeted with a illustration of the hook-armed explorer on a Virginia beach.

What is to be done? Probably nothing. The outstretched right arm is integral to the sculpture, it isn't likely they will lop it off for historical accuracy. My prediction is that they will put up a little disclaimer plaque in a discreet location: "Actually, this statue is completely wrong. Sorry."

Update: I started a thread about this over at the general interest website Metafilter where the users added some interesting twists to the story. This Washington Post editorial decries "a sanitized monument not only to the spirit of discovery and exploration but also to the liberties too easily taken with the past and the dead." Hair defends himself in this article in the Charlotte Observer, claiming "I have endeavored to be accurate in every historic piece I have sculpted." Another Metafilter member reminded us that statues of one-armed naval heroes are not uncommon, especially this guy.
Posted by Larry Cebula No comments:

Alas, the Simpson's version of the Lewis and Clark expedition was pulled from YouTube after a cowardly complaint from Twentieth Century Fox. Something about copyright violation. Wankers. The Wikipedia episode description only hints at the greatness!
Posted by Larry Cebula No comments: