Memories of Indians from the Voices of the Pioneers Collection

One of the more interesting collections we have at the Washington State Archives, Digital Archives, is an oral history collection called Voices of the Pioneers. These testimonies were gathered between 1955 and 1971 by the Friends of the Spokane Public Library, and were digitized and put online by a great EWU grad student, Shaun Reeser. There are over 100 of these oral histories, some from informants who came to Spokane when it was named Spokane Falls and was a part of the Washington Territory. And thanks to a partnership between the State Archives and Microsoft, the audio records are keyword searchable. I did a search for "Indians" and came up with some great interviews:

Some of these interviews include information that is found nowhere else, and they are an enormously valuable source for local and regional history. Many of the interviews include transcripts, which are available here. There is is also this index to the series. 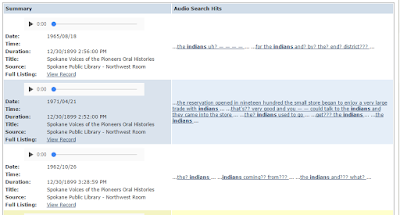 Admittedly, the collection is a bit of a mess to use. As seen above, the audio search shows records where Indians are mentioned, but not whom is being interviewed nor any of the short list of topics that exist on the record pages. The audio records and transcripts are in separate collections because of how the archives software works, and the record pages of each don't provide any hint that additional resources are available. And the very useful index is not in our collection at all.

With these caveats, this is a rich and rewarding collection. Dive in and share what you find!