In my last post I shared this picture of Spokane's "Biggest Indian Contest" and asked my readers: What the hell?

Riva Dean, the fantastic reference librarian at the Northwest Room of the Spokane Public Library, nailed it:

Hi Larry. I just saw your post this morning and then this afternoon, I realized where it came from! We have a file of photographs of the opening of the Indian Canyon Golf Course. There are lots of photographs of Indians dressed up and doing some pretty odd things – like shooting bows and arrows while someone is teeing off. This photograph is included in the file and it says “Mayor Burch greeting the ‘biggest’ Indian present for the golf opening ceremonies in May 1936.”

So there we have it--the Biggest Indian Contest was a promotional stunt for the opening of a Golf Course. Dean sent along a link to this 1935 Spokane Chronicle story about the event:

We can't just leave it there, however. The opening of the golf course was kind of a big deal in Spokane. The promoters played off the name of Indian Canyon and invited numerous native people to the grand opening, and photographers to record the event. Some of these images are similar to the staged, racist photographs of the period that tried to draw humor from the supposed contrast between native peoples and modern technology. Others are simply documentary or at worst playful. Here are a few from the University of Washington's digital collections:


Finally, in April of the next year the Spokane Daily Chronicle ran a photograph of George Nanamkin and some friends, again at Indian Canyon but this time in everyday dress. "Indians See Many Changes in Site of Historic Battle" the headline reads, though so far as I know there was never a battle at this site. From the sweaters and cardigans in the image, it looks like Nanamkin was there to play golf for real that day. I love the contrast between this image of real individuals on a holiday compared to the staged images above: 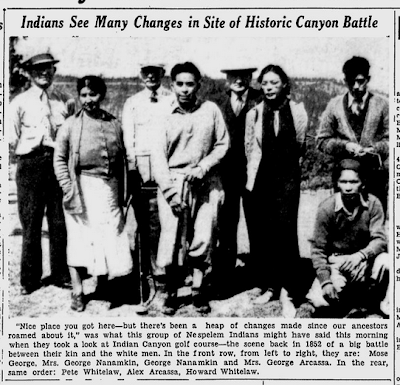 What was the "Biggest Indian Contest?" 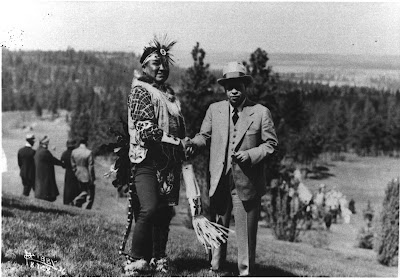 This morning I received an email from Seattle-area historian Knute Berger with this wonderful image attached. The picture is from the Spokane Historic Preservation Office image collection at the Washington State Archives, Digital Archives where I work. The caption reads: "Spokane Mayor Burch with 'Biggest Indian' Contest Winner" and lists the photographer as Charles Libby.

Knute wondered if I knew anything more about this striking and a little strange image. I do not. I know that Arthur W. Burch was mayor of Spokane from 1935 until 1937, so that dates the photograph. A Goggle search suggests that "biggest Indian" contests were something of a thing in the early-20th century and are continued by a few First Nations groups in Canada today. And that is all I have.

But why should I do all the work on this blog? Dear readers, does anyone know anything more about this contest or this photograph? What was the "Biggest Indian Contest?" Where was the photograph taken? Who is the winner? How long did the contest continue?

I'd love to know more about this image.
Posted by Larry Cebula No comments: Links to this post

Spokane friends, if you have not seen the terrific SPOMa: Spokane Modern Architecture, '48-'73 exhibit at the Northwest Museum of Arts & Culture, your time is running out. The exhibit closes on January 12.

SPOMa is the most innovative exhibit that the MAC has created in some time. Spokane is revealed to have been a hotbed of modern architecture in the 50s and 60s:  "The 25-year period between 1948 and 1973 saw an unrivaled burst of architectural creativity in Spokane—greater than that of anywhere else in the Pacific Northwest. Trained by Walter Gropius, schooled in Europe, wooed by Frank Lloyd Wright, and determined to push the design envelope, Spokane’s mid-century architects changed the face of the city and received national recognition for their efforts." Who knew, right?

Photographs, plans and drawings of such modern design icons as the Washington Water Power Central Facility and St. Charles Catholic Church are exhibited alongside mid-century modern furniture, jazz records, and other even a timeline of modern design in Spokane. A small movie theater created within the exhibit shows a loop of films that includes and excellent 30 minute documentary, the brilliantly-titled When Spokane Was Modern. Here is a trailer for the film:

SPOMa is an exhibit that will make you see your city in a new way. Unfortunately there are no plans to produce an exhibit catalog or to make the video available after the show--so check it out before it is gone.
Posted by Larry Cebula No comments: Links to this post

Some Great Images from the Washington State Digital Archives

One of the jobs my students do at the Washington State Archives, Digital Archives is to create tweets for our Twitter feed. We had a lot going on this fall and I dropped the ball on keeping a regular stream of tweets, but we are about to resume. My grad student in charge of this, Anna Harbine, has been finding some really wonderful images in our collections. Here are a few of them: A colorful 1931 decorative historic map of Washington State. From sea monsters to Chief Joseph, Washington has it all. The historical illustrations around the map are particularly interesting. This 1912 map, "Yachting and Cruising Waters of the Pacific Northwest," includes a spotting guide to some of the more illustrious yachts that trolled those waters in that day. Above is a really striking photo of canoes gathered at Neah Bay for a Potlatch. Seattle after the Great Fire of 1889. Spokane and Cheney burned down the same summer.

There are many thousands more images of Washington history at the Digital Archives--not only photos but maps, property record cards, marriage licenses, naturalization certificates, and so much more. I am really proud to be a part of the team there.


Posted by Larry Cebula No comments: Links to this post