So What is Happening with Spokane Historical?

Spokane Historical is a smartphone app and website for local history, and is a project of the Public History program at Eastern Washington University. It has been awhile since I blogged about this project, and there is a lot to report.

There are now over 150 high quality points of interpretation, or "tour stops" on Spokane Historical. All were created by EWU students in public history courses. I have given students a pretty free hand in choosing their topics, and I am pleased with the diversity of topics. In Spokane we have everything from a tour of the historic parks and Fort George Wright to stops along the Art Walk and many historic buildings and events.

Spokane Historical also includes substantial content in Cheney, including downtown landmarks such as the Odd Fellows Building and Bill's Tavern. We have interpreted over a dozen sites on the EWU campus, including Showalter Hall, the JFK Library, and Jore School--the one-room schoolhouse on the Cheney campus.

There is so much terrific content on Spokane Historical that for the next few weeks I will feature a series of posts about the project. But you don't have to wait for me--go ahead and take a look around.
Posted by Larry Cebula No comments: Links to this post

Where Would You Film a Spokane Tilt-Shift Video?

You know those tilt-shift, time-lapse videos your friends are always sharing on Facebook? Neat, aren't they? I particularly like this one, filmed in Chicago:

What I love about it, beyond the technique, is how many iconic Chicago landmarks make an appearance. We see Navy Pier, Lakeshore Drive, the L, amd lots of Chicago architecture.

If you were going to make a film like this in Spokane, where would you film it? What places have both iconic imagery that says Spokane, but also some sort of interesting activity and movement that lends itself to this sort of film technique? Off the top of my head, a tilt-shift, time-lapse video of Spokane could include:


What else? And who is to make this film? It sounds like a good class project for some film class at one of the colleges. Get busy, someone!
Posted by Larry Cebula No comments: Links to this post

I was searching for something else entirely and came across this little item from the December 3, 1940 issue of the Spokesman Review:

What a proud and handsome young man! I had to wonder though--what fate befell this young man who entered the Army Air Corps a year before Pearl Harbor?

The Army Air Corps was expanded by Congress in 1939, and Croteau, a recent graduate of Gonzaga University, was one of hundreds of new pilots being recruited. Kelly Field was a training base in San Antonio. As Croteau went to Kelly Field, Europe was awash in war, the Japanese Army had conquered much of China and southeast Asia, and the United States was preparing to enter the global conflict. So what happened to our smiling lad from Wallace?

Croteau was assigned to the 83rd Squadron, 12th Bomb Group (M), of the 9th United States Army Air Force at Ismailia, Egypt. He piloted a B-25 in support of allied troops at the Battle of El Alamein. I know this because of this web page that describes the wartime service of Roland Rakow, the lower turret gunner on Croteau's bomber. Let's let Rakow tell the story:

On September 1, 1942, as our B-25 was returning from its second completed mission—dropping its bomb load on tanks, trucks and troops on the front line at El Alamein—it was struck by a German anti-aircraft 88 mm shell on the left side of the aircraft, adjacent to the top turret gun position. The shell made a gaping hole, which caused the aircraft to break open and go into a 30-or 40-degree dive.

The bombardier, navigator, and the top turret gunner were unable to leave the aircraft. The pilot, co-pilot, and I (the radio operator) parachuted to the ground. We sustained wounds and injuries. “The aircraft crashed in the desert. Capt. Croteau—who was slightly injured—and Lt. Biers located the crash site and found the bodies of Lt. McPartlin and Lt. Archer still in the aircraft. Not wanting to leave their bodies, they buried them at the site. Sergeant Andersen’s body was not found.

I had parachuted to a different location. Within a short period of time, Capt. Croteau and Lt. Biers were discovered and taken prisoner by the German Army. Subsequently, they were transported to a German POW camp and they remained there for the duration of the war.

Rakow was sent to a prison camp in Italy from which he eventually escaped, making his way back to Allied lines and was returned to the States for medical treatment. At the end of his narrative he notes: "I have never been in contact with Capt. Croteau or Lt. Biers, the remaining survivors of my B-25 crew. However, I did hear from other members of our 83rd Squadron that Capt. Croteau had passed away."

Croteau had not passed away, however. He survived the war and returned to the Northwest. Croteau married, had a child, worked for Uniroyal and Delta, and lived until 2006, when he died at the ripe old age of age of 87 in Beaverton, Oregon. Here is his grave. His obituary notes that he was a prisoner of war for 32 months. Croeau lived for over 64 years after he was shot down, wounded, and taken prisoner in 1941, and more than 60 years after his crew mate Rakov reported his death.

Friday was a good day, I got to watch one of my public history graduate students, Clayton Hanson, defend his MA project and complete the requirements for graduation.

Clayton has combined his studies at Eastern Washington University with a series of seasonal positions with the National Park Service, where he has specialized in helping parks use new media to better serve the public. His MA project was a portfolio of some of the digital work he has done, including interpretive guides for the NPS on the use of social media, some clever historic site interpretations at Spokane Historical, quire a few Facebook posts for Lake Roosevelt National Recreation Area, and quite a bit else. One of his digital media projects was to organize the Lake Roosevelt's photo collection put the highlights online, which he did at Lake Roosevelt National Recreation Area's photosets on Flickr.

There are some wonderful historic images there, and I wanted to share a few here:

The "mourning ceremony" was held by Indians as the slack water of the Grand Coulee Dam rose and covered Kettle Falls, where Indians had fished for salmon for thousands of years. To thousands of Indians, construction of the dam was then end to a traditional way of life.


There are so many additional wonderful images, go ahead and explore a while. And congratulations Clayton!


Posted by Larry Cebula No comments: Links to this post

So I was fooling around at the National Archives website the other day and found this: 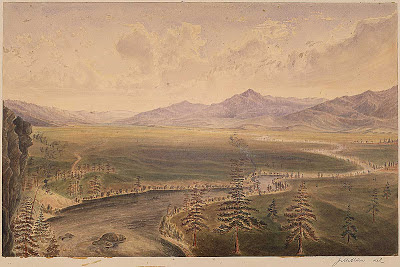 Isn't it lovely? This watercolor was painted around 1857 near Plante's Ferry across the Spokane River, and is surely the earliest depiction of Spokane Valley. If you click through to the original record you can zoom in and explore this very detailed painting. Can you find the two men in a canoe? The wagon road?

The image reveals a lot about the environment at that time. I tweeted the image and the helpful @doigSt identified the mountains: "Signal Point, Blossom Mountain & the 2 Mica Peaks." He also asked why there are so few trees in the image. The almost complete lack of trees in the valley would have been due to native burning. Plateau Indians typically set periodic fires to many areas to shape the land to their needs. Regular burning created a purposeful mosaic of prairies and forest that created environments rich in game animals and popular plant foodstuffs.

I believe the painter must have been part way up the same bluff where Spokane inventor Royal Riblet built his mansion. Riblet is a great local character, the inventor of the chair lift and many other, often less practical, inventions. Perhaps I will head out with my camera and see if I can rephotograph the same area from the same location. In the meantime, here is the approximate same view in Google Earth: 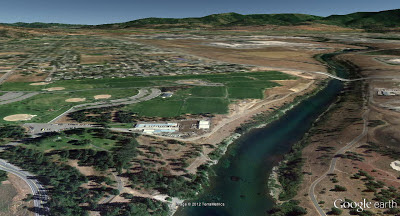