The Real People: 1970s Documentary Series by and About Pacific Northwest Indians 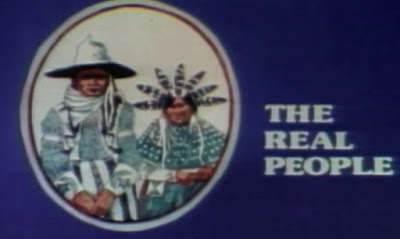 I am often delighted and amazed by what pops up on YouTube. As  films are digitized, they often get loaded to YouTube. Old home movies, documentaries about regional history, clips of old TV shows, all once locked away on film reels housed in some basement or attic, become public again.

The Real People was a series of nine, 25-30 minute documentaries produced by and about Northwest native peoples in the mid-1970s. The movies were produced for KYRS-TV, which recently loaded them to their YouTube channel. Here they are:
I wish I knew more about these films! All a quick search turns up is a few brief descriptions, such as this one from a 2001 book: "The Real People was an ambitious eight-part series developed in 1976 by KSPS-TV, a public television station in Spokane, Washington . . . . The series focused attention on lesser-known Indians located in the Northwest Plateau region of the United States. Among the tribes featured in the series were the Coeur D'Alene, Colville, Flathead, Kalispel, Kootenai, Nez Perce, and Spokane. George Burdeau was a consultant for The Real People series."

Burdeau turns out to be a veteran Native American filmmaker with a long list of credits, this series looks to be some of his earliest work.

Dear Readers, do any of you know more about these films?

What are Your Favorite Podcasts?

I do a fair bit of driving, and for the last couple of years have been relying on history podcasts to make the miles pass by. I have learned a lot about history and about storytelling. I also discovered that I am fairly picky--many popular history podcasts leave me cold. I like tight storytelling, concise conversations, and decent production values. I do not like listening to a couple of long-winded PhDs having a conversation over a poor telephone connection about who is more clever than the other. I particularly love the local, the off-beat, the unexpected. 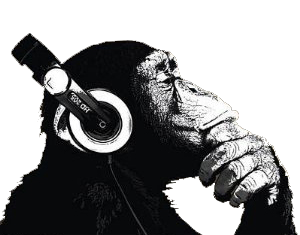 I thought I would share a few of my favorites, and ask my readers
to share their own.

I have a few others that I listen to, but I am more interested in discovering some new podcasts. Dear Reader, what do you listen to?
Posted by Larry Cebula 2 comments: Links to this post

Pillars of the Sky: A Crazy Mess of a Historical Film 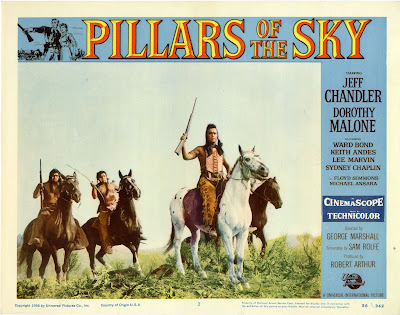 I hesitate to share this at all, but it is one of only two films I know of that are based on the 19th-century white-native conflicts on the Columbia Plateau. (The other is I Will Fight No More Forever, a 1975 TV movie about the Nez Perce War of 1877.)

Pillars of the Sky is a 1956 B-movie western, based on a 1953 novel, To Follow a Flag, by Henry Wilson Allen. Though ostensibly set in 1868 (apparently so the characters can reminisce about how they fought together in the Civil War) it is loosely based on the Yakima War (1855) and the Steptoe Expedition (1858).

The film is a classic western of the time, with an outlandish plot, a conflicted, hard-drinking western hero, the fallen woman who loves him, and some stereotypical Indians. Some of the native characters are quite loosely based on real historical individuals--Kamiakin (the film's villain), Timothy (a U.S. Indian scout in uniform!), a couple others. Two of the white characters are based on real folks, Dr. Joseph Holden is roughly Marcus Whitman (with no Narcissa in sight) and Col. Edson Stedlow = Col. Edward Steptoe. Most of the film is invented from whole cloth, but there is a climactic battle scene based on the Battle of Steptoe Butte. I am so surprised I'd never heard of this movie.

Dear Reader, I watched the whole thing so you would not have to. If you want to skip to the more interesting parts, I would fast forward to 1) 23:48, where Kamiakin storms into a gathering of chiefs and has an epic argument with Timothy about how the Indians should deal with the white men, 2) 56:00, the start of the Battle of Steptoe Butte sequence, and maybe 3) the ridiculous ending starting at 1:23:00 where Dr. Holden (Marcus Whitman) is murdered by Kamiakin (!) who in turn is slain by Couer D'Alene chief Isaiah (!!). It is to be noted that none of that last bit actually happened.


1956 - Pillars of the Sky - Jeff Chandler; Ward... by westerns_only
Posted by Larry Cebula 2 comments: Links to this post

The Language This Land Remembers

One of the most exciting developments hereabouts on the Columbia Plateau is the ongoing revival of native cultures. Everywhere I go I meet native people who are building traditional canoes, reviving native foodways, bringing back lost animal species and recovering and teaching the native Salishan dialects of the northern Plateau.

The Language this Land Remembers is a wonderful short film about the Salish School of Spokane, whose mission is "to create a vibrant community of fluent speakers of Interior Salish languages by providing Salish language instruction to children and by empowering parents and families to speak Salish in their daily lives." Enjoy.

Ethnic Cleansing and the City Beautiful: The Case of Spokane

One of my many uncompleted (or more accurately, hardly begun) projects is about the ways that the white leaders of early Spokane worked to force American Indians out of the city limits. In the 1890s and 1900s Spokane's elites wanted to move past the image of a rowdy frontier town and tried to become a more refined and sophisticated city. This effort took many forms, from anti-spitting ordinances to creating libraries and city parks. This City Beautiful Movement had an uglier aspect as well--the forced removal of Indians from the streets of Spokane. The very same people who created our park system pushed for the removal of the people who had originally inhabited those parks, and for the very same reason--to make Spokane appear more modern. 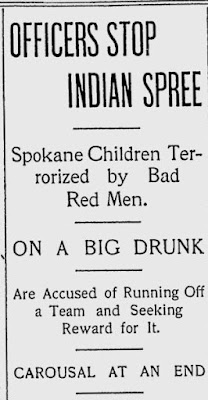 Today I found another newspaper article to drop into my research file for this topic. "Officers Stop Indian Spree," screamed the front page of the Spokesman-Review on June 9, 1903. "Spokane Children Terrorized by Bad Red Men," the headlines continued, "ON A BIG DRUNK."

The story is the usual set of racist assertions that shaped western press coverage of Native Americans in this period, using some particularly ugly language which I will not quote. But reading the article against the grain, as it were, we pick out some interesting facts about American Indians and the City of Spokane at the time.

The article notes that the hot weather has brought "a big bunch of Indians" to Spokane, that Indian Agent Major Anderson was unable to prevent. It further notes that Indians were supposed to get a permit to leave their reservations, a system which was proving unenforceable.

The tribes included the Spokane, Nespelems, and Couer D'Alenes, who established three camps. The largest, with 40 Indians, was at "the north end of Monroe Street, just inside city limits." This seems to have been at Drumheller Springs. Another was "across the river from the army post" and a third was near Greenwood Cemetery.

I have found bits and pieces of information about these traditional camping spots before. Drumheller Springs was used by reservation Indians as a camping spot when they traveled to Spokane as late as the 1920s, according to Barry Moses in this video (story starts at 4 minutes in). This 1904 death return for an Indian man killed in a fall lists the location of the accident as "at his camp North Monroe Street" and seems to imply the same location.

The camp across the river from Fort George Wright is portrayed in this detail from the 1890 birds-eye-view map of Spokane:

The third camp is what would come to be called Indian Canyon. This camp is where Slough-Keetcha, known to most as Spokane Garry, lived his last days, and was occupied at least into the 1910s, as we see in this lovely glass plate slide created by the early Spokane Parks Department, taken sometime before 1913: 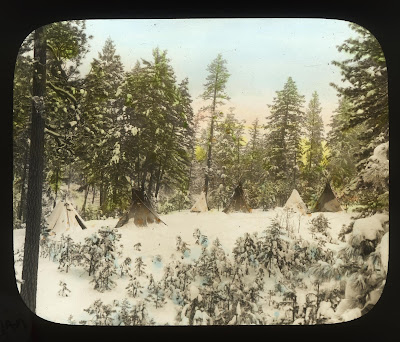 The rest of the article describes alleged native shenanigans including loud partying and stealing a white man's team of horses to extract a fee for recovering them. Both are remarkably mild offenses in Spokane in 1903, a city that was known for rowdy workers from the mines and timber camps and the saloons and brothels that served them. It was enough, however, to get local law enforcement agencies to unite and order the Indians to leave town. "If the Indians are not gone by today," the newspaper warns, "some of them will sleep in the county jail tonight."

So if we strip away the racism we get a remarkable portrait of native life in 1903. Indians seem to have regularly slipped away from the reservations to return to their traditional gathering spots along the river. There were three regular camps that were used for generations after white settlers had displaced the original inhabitants and forced them onto reservations. If Indians grew too visible in the city, by their activities or their numbers, law officials worked together to expel them from the city limits.

I was talking about this research topic years ago to a friend, who pointed out a sad, modern connection. Some of our city parks today offer refuge to Spokane's homeless population--a population where American Indians are over-represented.

So many research topics, so little time.