Google and the Spokesman-Review have scanned and placed online a huge run of the Spokane Daily Chronicle. It appears that they have digitzed the paper from about 1890 through its demise in 1982. The articles are full text, searchable, and free. They are also deeply buried, so pay attention boys and girls.

I had a lot of fun trolling the archives for Spokane history, A search for "Chief Joseph" before 1920 (to screen out articles about Chief Joseph dam and such) turned up some wonderful primary sources, such as Old Foemen Met Again .Chief Joseph And General Howard Sat Side By Side--Famous Red Warrior Talks to Young Folks. The 1904 article reports 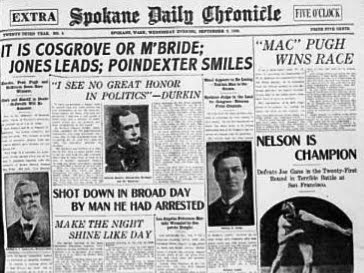 that Joseph gave a speech to the graduating class of Carlisle Indian school. Also of interest were Spirits Helped Chief Joseph Outwit Whites, Says Indian, and an article entitled Howling In The Hills. The latter is something of a racist rant by the Chronicle devoted to complaining that the some regional tribes were planning a powwow, "a copper-colored carnival of dancing, horse-racing, gambling, getting drunk, and painting the forest a primeval a bright carmine tint, spotted with purple and vermilion."

Surprisingly, the Chronicle seems not to have reported Joesph's death, which occurred on September 21, 1904, six months after his Carlisle speech.

Some other finds include this account a 1912 Spokane speech by Theodore Roosevelt, an 1898 story about a doctor arrested for performing an abortion, and a 1908 editorial about a development plan that would alter the falls on the Spokane Falls.

We are lucky indeed, as Spokane appears to be one of only a handful of cities available for free in the Google News archive. A bit of thrashing around in the archives reveals digitized historic content for St. Petersberg, Florida and a bunch of newspapers in New Zealand that seem to have been digitized as part of an independent project and are merely indexed via Google.

(Hat tip to the often-useful Eastern Washington Genealogical Society blog for discovering this resource.)
Posted by Larry Cebula 2 comments: Links to this post

Does the Northwest Need a Heritage Area?

Why are there no federally-designated National Heritage Areas in the Pacific Northwest? And if we were to propose some, what would they be?

I came to these questions after reading Carroll Van West's nice article in the current Organization of American Historians newsletter: Historians and the Opportunities of National 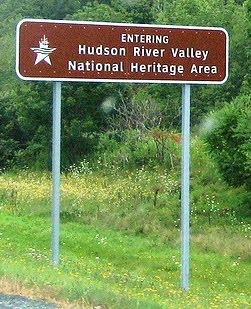 National Heritage Areas have been around for 25 years now but I think it is fair to say that they are little-understood. Van West does a nice job of explaining the heritage area concept and practice and suggesting ways that historians can become more involved. "For public historians and scholars who wish to take their research and classes into historic settings, National Heritage Areas are potentially valuable avenues to explore," Van West writes. "With justification, historians have long decried the incomplete history, out of step with prevailing scholarly research and interpretation, which they encounter at local and state parks and museums. The same criticism may be launched at heritage areas, but this federal program also offers opportunities for engagement between universities and communities that potentially gives historians a way to bring new questions, sources, and understandings to large public audiences." Amen!

So with these ringing words echoing in my head, I went to the NPS Map of National Heritage Areas to find the ones in the Pacific Northwest. There aren't any! OK, there is that one in Alaska, but none at all in Washington, Oregon, Idaho, Montana, or Wyoming. Friends, we wuz robbed! And since the heritage areas seem to be organized from the bottom up, it is no one's fault but our own. Let's fix this, shall we?

Fortunately, the National Park Service has a handy set of resources title Becoming a National Heritage Area. These include the very-objective-looking "Suggested Criteria" which include:

"1. The area has an assemblage of natural, historic, or cultural resources that together represent distinctive aspects of
American heritage worthy of recognition, conservation, interpretation, and continuing use, and are best managed as
such an assemblage through partnerships among public and private entities, and by combining diverse and sometimes
noncontiguous resources and active communities;

"2. The area reflects traditions, customs, beliefs, and folk life that are a valuable part of the national story;

"5. Resources that are important to the identified theme or themes of the area retain a degree of integrity capable of
supporting interpretation . . . "

There are five additional criteria, mostly addressing planning and cooperation.

So what broad historic themes are uniquely illustrated/supported/preserved by historic sites, institutions, and peoples in the Pacific Northwest? My quick thoughts include:

A heritage area based around the continuing historical interactions between Indians and whites on the Columbia Plateau with emphasis on the fur trade, missions, and military conflict. I sketched it out by creating a custom Google Map (which for some reason is not centering properly!):

Does anyone have additional ideas? Would anyone like to work on this?

I just wanted to share this wonderful passage from Alexander Ross' account of the failed Astoria adventure (the attempt by John Jacob Astor to establish a string of fur trading posts across North America). This passage is from Ross' wonderfully entertaining account, Adventures of the First Settlers on the Oregon or Columbia River:

On the 17th, we were paddling along at daylight. On putting on shore to breakfast, four Indians on 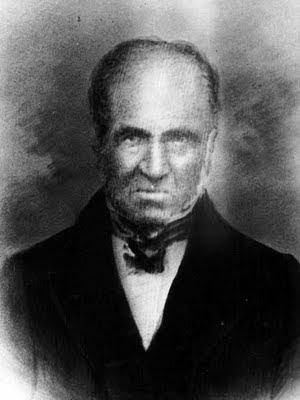 horseback joined us. The moment they alighted, one set about hobbling their horses, another to gather small sticks, a third to make a fire, and the fourth to catch fish. For this purpose, the fisherman cut off a bit of his leathern shirt, about the size of a small bean; then pulling out two or three hairs from his horse's tail for a line, tied the bit of leather to one end of it, in place of a hook or fly. Thus prepared, he entered the river a little way, sat down on a stone, and began throwing the small fish, three or four inches long, on shore, just as fast as he pleased; and while he was thus employed, another picked them up and threw them towards the fire, while the third stuck them up round it in a circle, on small sticks; and they were no sooner up than roasted. The fellows then sitting down, swallowed them—heads, tails, bones, guts, fins, and all, in no time, just as one would swallow the yolk of an egg. Now all this was but the work of a few minutes; and before our man had his kettle ready for the fire, the Indians were already eating their breakfast.

When the fish had hold of the bit of wet leather, or bait, their teeth got entangled in it, so as to give time to jerk them on shore, which was to us a new mode of angling; fire produced by the friction of two bits of wood was also a novelty; but what surprised us most of all, was the regularity with which they proceeded, and the quickness of the whole process, which actually took them less time to perform, than it has taken me to note it down.

Keep in mind that Ross was writing with quill and ink! Ross later married an Indian woman and his accounts of native people are often far more sympathetic than those of his white contemporaries. His Fur Hunters of the Far West is another great primary source for the early northwest.

[Picture of Alexander Ross take from this Manitoba Historical Society page, which has links to more of his writings.]
Posted by Larry Cebula 1 comment: Links to this post

Interesting NY Times article: As Classrooms Go Digital, Textbooks Are History. "Textbooks have not gone the way of the scroll yet, but many educators say that it will not be long before they are replaced by digital versions — or supplanted altogether by lessons assembled from the wealth of free courseware, educational games, videos and projects on the Web."

Much 0f the focus of the article is on California, where the Governator has decreed that the public schools will go to open source digital textbooks in the near future. But it won't stop with California, or with the public schools. Every professor I know resents the textbook companies and their monopolistic practices. We would dump the textbook companies in a minute if there were a decent alternative.

And yet ... what professors and textbook companies have in common is that we provide content. How long until digital textbooks morph into full-fledged digital courses, good for college credit?
Posted by Larry Cebula No comments: Links to this post

Email ThisBlogThis!Share to TwitterShare to FacebookShare to Pinterest
Tags: education

Some folks are putting their virtual heads together to organize THATCamp Pacific Northwest for this fall. The idea is to bring some of that "unconference" THATCamp goodness to the Pacific Northwest. If you are interested, go and take the planning survey. It looks like a date will be chosen within the week!
Posted by Larry Cebula 2 comments: Links to this post