Mammoths of the Inland Empire

Fifteen Thousand Years ago the gigantic Glacial Lake Missoula burst through its ice dam and roared across eastern Washington. We are used to t 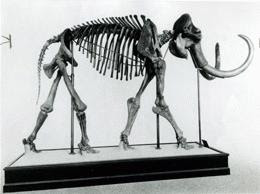 hinking of the flood as a geological phenomena, but it was also a biological one--especially for the doomed thousands of woolly mammoths who were swept up in a wall of water half a mile high and traveling at 60 miles per hour. The flood waters left behind what scientists have termed "An Ancient Bathtub Ring Of Mammoth Fossils" in eastern Washington.

In 1876 some farmers discovered the first mammoth skeleton in a bog along Hangman Creek south of Spokane. The discoverers toured the skeleton through eastern Washington, charging admission to see the massive bones. The excitement encouraged neighboring farmers to drain their own bogs in search of prehistoric monsters, and soon a rival skeleton was being displayed. The whole episode is amusingly recounted an "Palouse Mammoths," a chapter of Jack Nisbet's wonderful book Visible Bones. The original skeleton (pictured above) is now on display at the Field Museum in 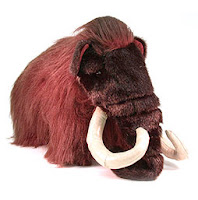 Chicago (and is perhaps the model for this charming puppet).

A quick search of our dear friend the Historical Newspapers in Washington Collection (hosted by the Washington State Digital Archives) turns up a delightful story of mammoth bones on display in Spokane in 1880:

On Exhibition: Dr. Tozier has his tent on Main Street, between Howard and Stevens, where our citizens are gathering in crowds to see the wonderful bones and fossils recently exhumed from a spring on Hangman Creek in this county. We have seem the spring from which the fossils are taken, and know they are genuine remains of animals formerly occupying this fair land of ours. Any one visiting the tent can see the pelvis bones of a mammoth elephant 6 feet across, indicating an animal weighing 10 or 12 tons; the bones of a little horse, full developed and standing only 32 inches high, remains of the musk ox, the monkey and several other species of animals now extinct. It is well worth the time and money of any one to visit this collection of interesting evidences of former inhabitants of this country. They go to show that many years ago, before the pent up waters broke through the Cascade range of mountains, our broad valleys were covered with lakes, along whose shores strange animals dwelt in peace. When the waters receded, they hovered about the living springs till the changes of circumstances performed the work of extinction. Of all that now remains of them, you can see a fair sample at the exhibition tents. Go and see for yourself.
(Spokan Times » 7/7/1881 » Page 3 » Column 4)

Late nineteenth-century northwesterners were hardly the first Americans to become fascinated by the mammoth skeletons that can be found throughout the continent. In this Common Place article Paul Semonin describes how scientists from Cotton Mather to Benjamin Franklin were intrigued by the occasional mammoth remains that turned up in early America. Charles Willson Peale, the preeminent American scientist of his day, displayed a mammoth skeleton (with the tusks mistakenly pointed 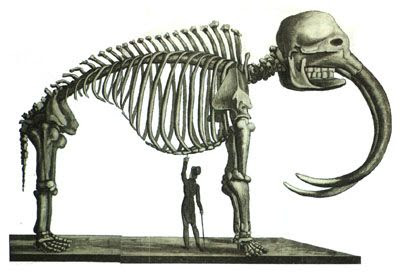 down) in his Philadelphia museum in he first years of the nineteenth century. Meriwether Lewis would have seen the display during his pre-expedition crash course in natural history in 1804. Jefferson's instructions to Lewis included the mandate to report on animals "which may be deemed rare or extinct," an apparent expression of Jefferson's hope that mammoths might still live in the far west.