There is something of a cultural florescence happening in Native America these days, and some of the cultural mixing is surprising and even playful. Take for example the Creek artist Todd Harder and his amazing native-themed skateboard decks: 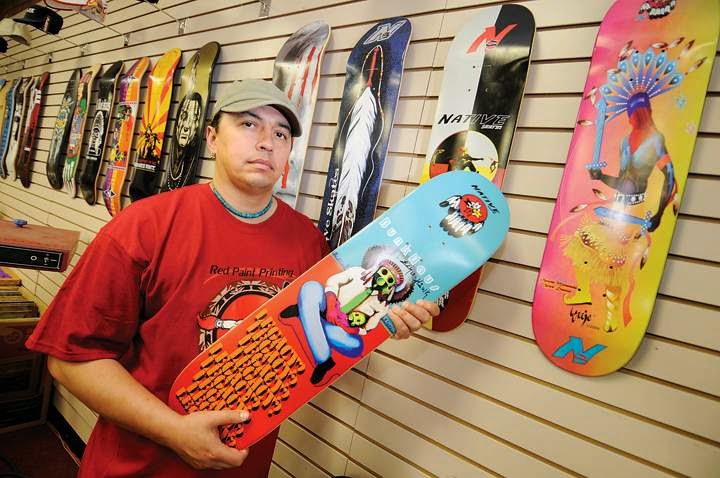 Harder is quite prolific--you can see more of his work here. A nationally-prominent figure, the New York Times ran a piece on Harder and the annual All Nations Skate Jam that he organized--an alcohol and drug-free gathering of Indian skateboarders that takes place in Albuquerque. Harder is also a central figure in the Smithsonian exhibit "Ramp it Up: Native Skateboard Culture in America."

Harder will speaking at Gonzaga on Thursday, September 18, at 5:00 p.m.  in the Globe Room of Cataldo Hall. A map of Gonzaga campus is here.The event is free and open to the public, and is sponsored by Gonzaga’s Native American Studies program and by the College of Arts and Sciences. For more information on this event, please contact Laurie Arnold, Director of Native American Studies, arnoldL@gonzaga.edu.

It is Time for a New State Song,,,

Our current Washington State song, Washington, My Home is terrible. Seriously, listen if you dare. As I have written before, it sounds like it was written by a committee of Girl Scouts. And to think we could have had Louie, Louie as the state song!

I want to propose a new state song--catchy, funny, historical, and written right here in Washington State. The song is The Old Settler. It was written by Judge Francis Henry of Pierce County around 1874 and was an instant hit. In fact when the state Constitutional Convention finished their work in 1889, they finished up by singing The Old Settler. The song was was forgotten until the early 20th century, when it was revived by Ivar Haglund--yeah, that Ivar. This charming video from MOHAI tells the story:

Additional information at this webpage from the Northwest Folklore Society. The one thing that the experts are missing is that the tune is not original--Henry set his lyrics to the tune of the traditional Irish folk (by which I men drinking) song, Rosin' the Bow.

Clearly, this is our song. Join me, Washingtonians, let's make this our state song. I know it is pretty west-side focused, but in this case we can let that pass. Acres of clams, people, acres of clams! Can't you see crowds of Washingtonians raising their voices to sing the Old Settler at Fourth of July picnics, or Seahawks games? We need to make this happen.

Here is how you can contact your state representatives. Do it today!
Posted by Larry Cebula 1 comment: