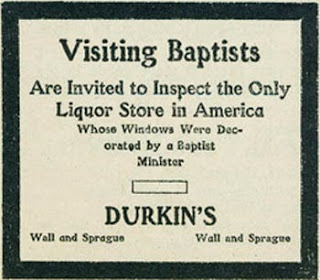 Spokane readers of this blog may have had the good fortune to visit Durkin's Liquor Bar, which opened up on Main Street last fall, approximately across from Auntie's Books. The bar is not strictly descended from the famour Durkin's Saloon of early Spokane, but it has a wonderful historic feel and some of the best craft cocktails in the city. But I digress...

I was looking for something else the other day and found this very nice blog post about Jimmie Durkin. Spokane James “Jimmie” Durkin: Spokane’s Legendary Liquor Tycoon
history experts may find little new, but for the rest of us it is a good introduction to one of the town's great characters:
Posted by Larry Cebula No comments: Links to this post

So this showed up in my feed a while back: A Global Art Project Brings Paintings of Anonymous Figures out of Museums and onto the Streets. The story is about the Outings Project, which had it's genesis--well let's let the first link explain it:

While visiting the Louvre last last year, artist and filmmaker Julien de Casabianca was struck by an Ingres painting of a female prisoner tucked unceremoniously into a corner of the museum. He suddenly had an idea: what if he could somehow free her—both figuratively and literally—by reproducing her figure on a public street.

Casabianca's initial effort has morphed to worldwide street art movement, with "Outings" spotted in London, Frankfurt, Barcelona, Dallas, Chicago, Rome and more. The project encourages others to "photograph the portraits of people on museum walls, print them, and move them to streets walls." Check the Facebook page for the latest sightings.

Obviously, this is completely delightful. It is also a suggestive model for public historians. How about a public history version of this, where we paste images of famous historical figures around town? They could be anyone--presidents, civil rights leaders, American Indians. The goal would be to create temporary, guerrilla public history displays to raise the historical consciousness of the community.

What would this look like in my own city, Spokane? I am thinking of a series of portraits around town, illustrating perhaps labor and civil rights leaders in Spokane or relevant to Spokane. The town has a rich labor history, with the Wobblies, other unions, some prominent labor actions like the Free Speech fight, etc. We could glue life-sized portraits of Elizabeth Gurley Flynn, Spokane Garry and Carl Maxey to downtown buildings. They could include speech bubbles describing their significance, or a digital interpretation triggered by a QR code or URL, or be just the images with no explanation for an air of mystery. Perhaps funding could be secured from a union or social justice group. There could be a guided walk on Labor Day.

Like the Outings Project, this could be a movement, in our case a movement of public historians. Who is with me?
Posted by Larry Cebula No comments: Links to this post

Was an Indian Boy Lynched in the 19th-Century Spokane?

A friend drew my attention to this folk song by the local group The Blue Ribbon Tea Company. Discursive in the way that folk songs often are, the main narrative thrust is a story about a mute Indian boy who was lynched for whistling at a white woman, apparently in the 19th century. Give the song a listen, I will wait.

The boy, presumably a Spokane Indian, was what today we would call developmentally disabled. His people, though, looked at him as having a spiritual blessing. He could not speak but he did whistle, and his tribe believed he was communicating with the animals. One day, the story goes, Colonel George Wright's wife was out riding and thought the boy was whistling lasciviously at her. She told her husband and he promptly sent out some men who lynched the boy for offending his wife's honor in such a fashion.

It would be easy--and a mistake--to dismiss this tale out of hand. After all, George Wright never lived in Spokane let alone with his wife. It could not have happened as told. Yet other parts of the story ring true. It is interesting that the native informant begins by pointing out a cave that his ancestors had used for cold storage--a traditional practice in this area. It is also true that native peoples of the region valued the differently-abled as having special spiritual powers.

The story is curious enough that I reached out to the songwriter, Bill Kostelec. I met him and his charming wife Kathy at their house. Kostelec turns out to have quite a backstory, he has a PhD in religion from Emory and has taught courses in Native American Religious Traditions at Gonzaga. He and Kathy are also skilled professional photographers. Bill poured us some coffee and he told me about the song.

The story of the lynching was told to him about 20 years previously by Calvin Garry, a great-grandson of Spokane Garry and a former paratrooper who was wounded on D-Day. Bill met Garry, who he estimates was in his 70s at the time, through one of his students who was also a member of the Spokane Tribe. Bill gave Garry a ride from the reservation to the city and the elder told him some stories, including that of the lynching. Garry pointed out the cave somewhere near Nine Mile. Garry did not place the lynching at Vinegar Flats or give any specific location. "He laid the story out just the way I told it in the song," Bill said to me. There were no additional details that Bill could recall--except that after hearing the story from Garry, his Spokane student asked several elders on the Coeur D'Alene reservation if they knew the story and they did, just as Garry had told it. Garry died in 2001.

We speculated about the facts behind the story. Of course the Wright part could not be true, but maybe his name became added to a story that really occurred. A search through digitized sources does not turn up any references to the incident in print or archival sources. Could there have been an unrecorded lynching of an Indian boy in the late 19th century in this area? It is certainly possible--extrajudicial violence against native people was common in that era, as we have seen with the lynching in Cheney. Such violence often made the newspapers (in some whitewashed fashion) but it is conceivable that the murder of one native boy might not have been recorded anywhere. This is particularly true if it were the very early period, before there were newspapers in Spokane.

The title of this post is the wrong question. Maybe the real question is not whether the story can be proven "true," but rather: Why was the story was told and retold in two local tribes, perhaps for over 100 years? I have come to believe that we historians have focused too much on the wars of the period, and too little on the many acts of small-scale acts of intimidation, injustice, and violence that we just as significant in the piecemeal dispossession of the natives from their land. The story of the mute Indian boy, true or not, is a piece of that larger puzzle.


Local TV station KREM this morning ran a piece about the ghost signs (those old painted advertisements you see on the sides of brick buildings) of Spokane, featuring none other than my brilliant grad students Anna Harbine and Frank Oesterheld. Frank is a former student actually, but I am still taking credit for him whenever possible. Here is the whole story, with a photo album as well as the video.

The ghost sign project began as a class assignment in my course HIST 407: Research Methods in Local History. The students fanned out across the city, built a map database of ghost signs, and then researched the stories behind the signs. A blog post here describes the project. Oesterheld was my teaching assistant and Harbine was a student in that class.

This project has proven to have surprising continued residence. Oesterheld and Harbine and two other grad students (Erin Pulley and Caitlin Shain) did a poster session about the project at the National Council for Public History conference in Monterey last year. The best stories became part of the ghost signs tour on Spokane Historical. Oesterheld and Harbine went on to develop a walking tour of the signs, which they led when the Northwest Archivists Conference came to town. And now this television piece.

Oesterheld and Harbine will be leading their walking tour of the ghost signs one more time, as part of a class they are teaching for the MAC--click here to sign up: Experiencing Local History: “Spokane’s Historic Ghost Signs Walking Tour”

Ari Kelman, the McCabe Greer Professor of History at Penn State University and winner of the 2014 Bancroft Prize in American History for his book A Misplaced Massacre: Struggling Over the Memory of Sand Creek, is coming to Spokane and Cheney on May 14th and 15th.

This is kind of a big deal.

A Misplaced Massacre has been variously described as "a complicated and beautiful narrative," "an instructive lesson in public history," and "a reopening of a dark chapter in American history." In addition to the Bancroft, the book won the Tom Watson Brown Book Award, and the Robert M. Utley Prize. Kelman is also the author of  A River and Its City:  The Nature of Landscape in New Orleans and the forthcoming Battle Lines: A Graphic History of the Civil War.

Kelman will be speaking about A Misplaced Massacre at two different times and locations:

You can catch him at 6-8 p.m. Thursday, May 14th at Spokane Falls Community College. He will be speaking in Building 24, more properly known as SN-W"EY'MN--a Salish word for "a trading place for knowledge, materials, trades and commercial goods"--Room 110. [map]

For more information about Kelman, visit his website where you can find reviews of his books, his blog, and other writings.