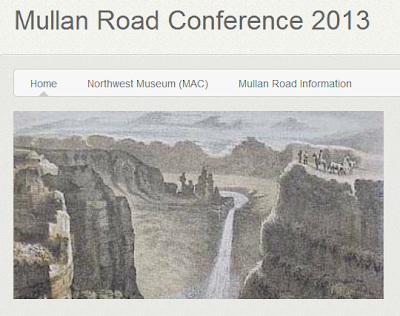 Dear Readers, I have been remiss in informing you about the upcoming Mullan Road Conference, which is this weekend in Spokane and Cheney.

Named after its builder Captain John Mullan, the road crossed the Continental Divide to connect the headwaters of navigation on the Missouri and Columbia Rivers. The wagon road was begun in 1859 and completed in 1862. In a very real sense, the Mullan Road completed the work begun by Lewis and Clark as they searched for a practical route to the Pacific Ocean.

Also much like Lewis and Clark, the Mullan Road is a bit overrated. The road only served for a few years before being closed by winter avalanches and washouts. Parts of the road continued to be used, right to this day, but long stretches are all but forgotten. Though the Mullan Road has a fascinating history it is hardly the equivalent of the Oregon Trail or other great western roads.

Still, the road attracts continuing interest from a mixed community of academics and history buffs. Each year we get together at a site along the road to share our research, look at pictures of ruts, see the local historical sites, and on Sunday to explore a section of the road--when it can be located at all. This year the conference will be held at the MAC, where we will break our sessions with a tour of the excellent David Douglas exhibit. And on Sunday we will explore the trail from the Snake River to the Idaho line.

At the NCPH Conference in Ottawa

I am at the 2013 Annual Meeting of the National Council on Public History. Unlike the last few years, I am not going to try and blog the experience. I am learning so much here--about interesting digital projects, about teaching public history, and about interesting partnerships. Some of it will show up in this blog later on.

Was Grandpa a Scab?

Note: Are you a westerner with ancestors from Missouri? The following guest post from Jarod Roll of the University of Sussex might explain your family tree. Roll was a student of mine back in the day at Missouri Southern State University in Joplin, where he developed an interest in the labor history of the region. The following post comes from his current research on the use of strike breakers in the mining west.

Mine owners in Idaho’s Coeur d’Alene district ran a remarkable classified ad in local newspapers in June 1899. They needed 1,000 miners to work in their silver and lead mines. What job creators, you might think! But these were not new jobs. In May the mine owners, with the help of the state government and federal soldiers, had imprisoned most of the men who had previously dug the district’s metals in the infamous bullpen. In April the Coeur d’Alene locals of the Western Federation of Miners had gone on strike for union recognition and higher wages in the Bunker Hill & Sullivan mine in Wardner. While what happened is disputed, an April 29 union rally ended with the destruction of the Bunker Hill & Sullivan mill by dynamiters. The authorities quickly lowered the boom on the union. Governor Frank Steunenberg declared martial law, President William McKinley dispatched federal soldiers, all known union members and suspected radicals were detained without charge, and the military authorities instituted a permit system that effectively blacklisted foreign-born and union miners from working in the Coeur d’Alene. Such effective union-busting created a problem, however. Who would work in the mines? Help wanted!

What made the ad so remarkable was not the circumstances that necessitated it, but that the mine owners placed it in local newspapers in Joplin, Missouri, over 1,500 miles away. Why go so far, why Joplin? Located in Jasper County near Missouri’s border with Kansas and Oklahoma, Joplin was the heart of one of the nation’s leading metal mining districts. In the 1890s the district led the nation in zinc production and ranked third in lead. Joplin miners were good miners, used to working in hard ground, and did not belong to a union. This combination had led mine owners in Leadville, Colorado, to Joplin to find strikebreakers to cross WFM picket lines in 1896. It worked. In early 1897, mine owners in Ouray, Colorado, came to Joplin for strikebreakers. It worked again. By 1899, if you needed good, non-union miners willing to take on the
WFM, Joplin was the place to go. Joplin’s miners were the best strikebreakers money could hire.

Hundreds of Joplin miners took the offer of employment in Idaho. By late summer, their work had brought most of the mines back into production. Their labor not only reinforced the owners’ heavy-handed union-busting strategy but also encouraged them to permanently replace the foreign-born miners of the WFM with native-born, non-union men. What had been a majority immigrant workforce in 1898 was two-thirds native-born American in 1901. The Joplin miners also benefited  Strikebreaking paid good wages! Many of the Joplin miners stayed on in Idaho. In 1904, for example, the owners’ employment agency reported that over 300 Missourians worked in the mines at Burke and Wallace, over 26% of the workforce. Some of the Joplin men went back to Missouri. Albert Torr, for example, used his earnings from strikebreaking to buy an interest in a Joplin mine. Others continued strikebreaking. In 1903, over 100 Joplin miners left Idaho to take strikebreaking work in Cripple Creek, Colorado.

Joplin strikebreakers left a poisoned legacy. Union miners rightly despised them. In Colorado, union miners coined a new phrase to describe the seeming ignorance and servility of Joplin strikebreakers: “I am from Joplin, you’ll have to show me.” Joplin miners would do anything their employers asked, the story went, but they were so ignorant that they had to be given careful instruction, to be shown. “Show me” began life as a term of opprobrium. In Idaho, “Joplin” and “Missourian” became synonyms for “scab,” or “cut-rate laborer.” Coeur d’Alene union miners even wrote a song, “Strike Breaker’s Lament,” that imagined the last words of dying Missouri strikebreaker:

I wish I was in Joplin, in Joplin down in Mo. . . .
Just then his voice it faltered, he ceased to murmur low,
His soul it went a-scooting to Joplin, Joplin, Mo.
His partner wept above him, and sadly fell his tears,
Then tried to drown his sorrow by drinking many beers;
He boxed the stiff and shipped him, as fast as he could go,
To the land of scabbing miners in Joplin, Joplin, Mo.

The mine owners got their 1,000 miners from Joplin in the end. Many of them stayed in Idaho. If you live there, look at your family tree. Do you have any ancestors from Missouri? If so, there is a good chance that they were scabs.

Jarod Roll teaches American History at the University of Sussex in Brighton, England. He is the author of Spirit of Rebellion: Labor and Religion in the New Cotton South and coauthor of The Gospel of the Working Class: Labor’s Southern Prophets in New Deal America. He earned his BA at Missouri Southern State University in Joplin, Joplin Mo.
Posted by Larry Cebula No comments: Links to this post

Today ended the second week of History 407: Research Methods in Local History. What a great day we had! The course met at the old Schade Brewery building in the West Central neighborhood, near Riverpoint campus. We explored the lobby and the historic photograhs there, then headed over to the Jensen Byrd. Students worked in teams of two, one with a clipboard and the other with a camera to record the signs the we found. Then the teams fanned out and explored the neighborhood.
Afterwards we had some beers at Ugly Betties and talked about what we had found and how to improve our data collection. Some of the observations:


Below is a slideshow of some pictures I took. The first half are from a few weeks ago when I was scouting for this class, today's photographs begin with the Schade brewery.

This announcement just in--looks like a great conference, and I am so pleased to see a heavily-discounted student rate.

The Washington Trust will welcome preservation, heritage, and Main Street professionals, board members, volunteers, small business owners, city and regional planners, elected officials, design and building trade professionals, community and economic development specialists, educators, students, and local community members.  Not only is this a great educational opportunity but a chance to network with others from across the state.  More information about the conference, including a preliminary schedule, can be found on our website at http://preservewa.org/RevitalizeWA.aspx.

In order to take advantage of this offer, simply visit the Eventbrite online registration at http://revitalizewa2013.eventbrite.com/ and select the “Student Conference Registration” ticket type.  Be sure to list your college or university as the “Company / Organization” under the “Work Information” section.  For further information, contact Cathy Wickwire at cwickwire@preservewa.org.
Posted by Larry Cebula No comments: Links to this post

On Wednesday, April 3 at 6 p.m. I will be at the Spokane Valley library to talk about digital approaches to telling local history stories, with a focus on Spokane Historical. Find out what Bert from Sesame Street and Osama Bin Laden have in common!