The Toughest Historical Reenactment you will ever see

What sort of events are suitable for first-person historical interpretation

In July of 1946, two black couples were lynched by white vigilantes near Moore's Ford Bridge in Georgia. One of the men, Roger Malcolm, had been accused of stabbing a white man in a fight. A group of 15-20 men, led by "a big man who was dressed mighty proud in a double-breasted brown suit," stopped a car in broad daylight, forced out the two couples inside, tied them to a tree alongside the road, and shot them approximately sixty times. One victim, George Dorsey, was a U.S. Army veteran recently back from the Second World War. Another, Dorothy Malcolm was seven months pregnant. Though the identity of the lynchers was quickly established, a grand jury failed to act, and the murderers were never brought to justice.

For the past seven years, a biracial group called the Moore's Ford Memorial Committee has done a historic reenactment of the lynching. I am awestruck at the moral courage that it must require to do this. Warning--this is hard thing to watch:

What is happening at Moore's Creek, though, falls outside of the normal categories--it is reenactment as a political act. A newspaper report describes it as "equal parts theater and chilling lesson in Georgia history," That is not exactly right, however. This is historical reenactment as protest. The reenactors are not only seeking recognition of what happened, they are demanding justice. Some of the murderers may still be alive in the Moore's Creek area, and this reenactment takes place right under their noses. Some of the participants explain their motivations in this video:

Another article about the reenactment here. Are there similar politically-motivated reenactments of historical crimes out there? This is a fascinating phenomena.

(First video via Kevin Levin at Civil War Memory.)
Posted by Larry Cebula No comments: Links to this post

This video is a terrific little piece of local reportage and public history. Charlie LeDuff is a legend in Detroit, where he is known for such reporting as Waiting for the Detroit Police and Meals on Wheels, Charlie LeDuff Eats Cat Food. In this video he explores Detroit's urban Rouge River, supposedly the most polluted in the country. It is a trip through history, as well as sewage.

The Rouge River may be the worst-polluted urban river in the U.S., but it is by no means the only one, and I think this exploration could be replicated in many American cities. In Hartford, two explorers have documented the underground Park River (video here) for example. And here is a little news video about kayaking the LA River (and getting arrested for the effort).

What lost or neglected streams and rivers would you like to explore (or have someone else explore!) in your community? What historical stories would it tell?
Posted by Larry Cebula 1 comment: Links to this post

This just in. I am sucker for old hippies and will be there. 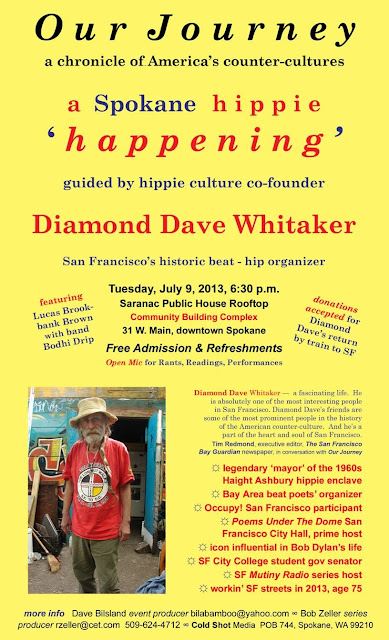