A Treasure-Trove of Ephemeral Indian Films

The American Indian Film Gallery is an interesting project. The online collection includes hundreds of films about American Indians, the bulk of them "educational shorts used in American schools from the 1930s to the 1970s." The films are organized by tribe and you can view them online or download them.

These films are archival treasures long buried in obscure vaults, unused and forgotten. But, they are not in perfect. Some were educational shorts used in American schools from the 1930s to the 1970s. Several have abbreviated titles or missing endings. Some are spliced or scratched; others have faded color. But through the mistakes made long ago by schoolroom projectionists, and film stock programmed to lose its coloration, the historical importance of the movies remains compelling. These films are windows into the human past, stunning documents with much to tell us about our New World story.

The native peoples of the Pacific Northwest are well represented in these curious period pieces. Examples: 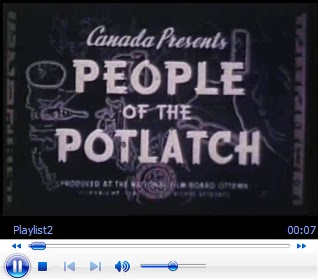 
● People of the Potlatch: Haida and Tsimshian Indians of the Pacific coast of Canada (1936)

The films range from some fairly racist and exploitive "educational" films from the '30s and '40s to films made by the tribes themselves in the '70s. All are the sort of rare ephemera that can be so historically valuable and yet so hard to find. The site was created and is maintained by a retired history professor, J. Fred MacDonald. Thanks Fred!
Posted by Larry Cebula 3 comments:

Bing Crosby is A) a subject for genealogy, B) the first cool white guy, or C) a singing rooster

The answer is, of course, D) all of the above. 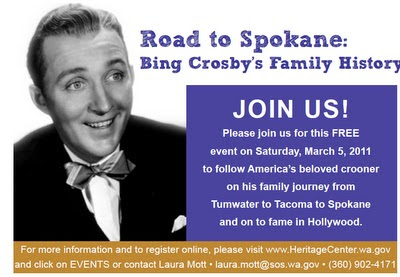 The Heritage Center of the Office of the Washington Secretary of State is sponsoring a genealogy event here in Spokane in a few weeks. More information here. It looks to be an interesting day, with tours of the Gonzaga archives, films and artifacts from Crosby's career, and more.

Crosby was a major figure in American entertainment--perhaps the major figure for the 1940s and 50s, and often does not get his due. A recent Crosby biography described him as "Cool before it was cool to be cool" and "hip before it was hip to be hip," which is about right. And he was a generous humanitarian who never forgot where he came from. Today there is a statue of him in Spokane (with a special removable pipe).

I though I would plug the even here because I work for the Secretary of State, but also because it offers me the opportunity to share with you the most wonderfully weird old cartoon I know, 1944's Swooner Crooner, which features a sing-off between Crosby and a young Frank Sinatra, reimagined as roosters, as they compete for the adulation of  adulation of teenage bobby-soxers, reimagined as egg-laying hens: