A Native Perspective on Mount Rushmore

If you were to stand in front of one public monument in your community and talk back to history, which monument would it be? What would you say?


I really like this short video of a Lakota man in front of Mount Rushmore, listing the anti-Indian sins of each of the presidents memorialized there. The narrator, Leon Matthews, has a great conversational style, along with passion for the subject. I also like the loose production values--the sound of the wind on the microphone and the children talking in the background. One could argue with some of the history (Lincoln also pardoned 265 Dakota who were sentenced to death after the Dakota Uprising). Still, this heartfelt and largely correct rejoinder makes us question the appropriateness of a monument to four agents of American empire in the heart of the Sacred (to the Lakota) Black Hills. Mathews has a YouTube channel of similar videos, along with a blog and occasional columns in the Lakota Country Times.

This is guerrilla public history, enabled by the digital age. An inexpensive video camera, a YouTube account, and a compelling message is all you need.

Which brings me back around to the question at the start of this post. What public monument would you reinterpret--either in your community or anywhere else?
Posted by Larry Cebula 3 comments: Links to this post

Fall Harvest Festival at the MAC on Saturday

The Northwest Museum of Arts & Culture is throwing a big shindig on Saturday, September 22nd. The Fall Harvest Festival features a variety of events, including fur trade reenactors, Scottish highland games, and a beer and wine garden. The highlight of the day is the opening of the new exhibit, David Douglas: A Naturalist at Work. The Spokesman ran an article about this exhibit, the first of its kind about an important figure in the history and natural history of the Pacific Northwest. At 4 p.m. exhibit curator and author Jack Nisbet will give a guided tour of the exhibit.

After a bumpy couple of years, the MAC seems to be finding its feet and redefining itself in ways that should improve its standing and relevance to the community. There is a lot going on at the MAC these days, from wine tastings to Archaeological Institute of American Lectures to the ever-popular BeGin gatherings.  If you have not been a MAC supporter, this might is a good time to become a member.
Posted by Larry Cebula No comments: Links to this post

Nature Girl and the Slaver

I was, I swear, doing academic research about Indians and British survey parties in the 1850s--when I Googled up this arresting image:

Of course, I dropped my academic research like a hot potato to find out more about Nature Girl and the Slaver the Y Drive In, and "untouched nymphet beauty."

I found the image at a delightful blog: Mondo 70: A Wild World of Cinema. Apparently the advertisement is from 1962, and the film itself is "a 1957 West German jungle picture, a sequel to Liane, Jungle Goddess." Of course. A search for the film title turned up an image of the original color poster: 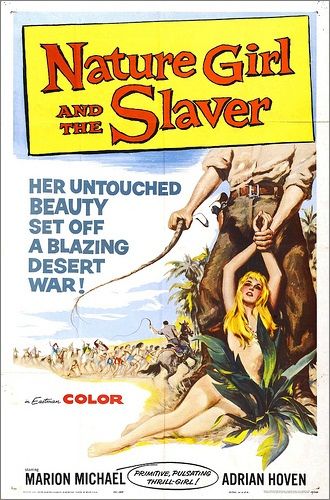 Avaxhome, the site where I found this poster describes Nature Girl and the Slaver thus:

What about the Y Drive In? I didn't find out much, except the the drive in theater was on the north side of Spokane near "the Y"--the place where US Routes 2 and 395 diverge. The theater closed in the early 80s and was torn down in 1983. A search through the Spokesman Review shows that the Y Drive In specialized in films like Nature Girl and the Slaver, Games Schoolgirls Play, and Ma and Pa Kettle at Waikiki.

Lewis and Clark Events in Spokane this Weekend!

I just received this press release in the mail. Unfortunately I will be out of town this weekend, but thought some local Northwest History readers might find it of interest:

Optional stops on your own:

Getting Progressive with Teddy in Spokane

My town of Spokane Washington is often thought of as a conservative place, but we have a long history of progressive thought and action. So it is no wonder that Theodore Roosevelt was quite popular in this town. The Spokesman-Review reminded us of that just the other day when Jim Kershner’s this day in history column featured a hundred-year-old story about a TR visit to Spokane:

The Spokane Daily Chronicle said he was “cheered repeatedly by immense throngs” topping 20,000.

His speech was filled with “Teddyisms,” and a “mere stenographic report fails to do justice to the situation.” His speech was peppered with “hot shots” like this: “I would rather see the cost of production enhanced than see it kept low by underpaid labor.” ...

The former president praised the people of Spokane – which had always been a Teddy stronghold – and called them “the real progressives.” The Spokesman-Review abandoned any pretense of impartiality in its main story, referring to him as “the human dynamo” and “the man who is leading the fight for honest politics.”

Last spring one of my students, Lee Nilsson, created an excellent tour stop for Spokane Historical titled “Theodore Roosevelt on the Parade Grounds.” Lee is a real ham and even did his own dramatic reading of the speech that TR gave in Spokane.

I was reminded of Lee's work and Kershner's column today when I was exploring the Cylinder Preservation and Digitization Project website. This wonderful project at UC-Santa Barbara is digitizing thousands of wax cylinders and putting them online. I was looking for specifically Pacific Northwest content and did not have much luck--except for a handful of Roosevelt speeches:


Take a listen to Lee's TR, and then to the man himself. I think Lee did pretty well!
Posted by Larry Cebula No comments: Links to this post

So here is our latest report on new downloads of Spokane Historical, the smartphone app for local history: 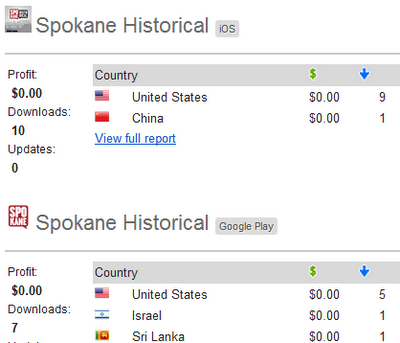 I am excited and perhaps a bit puzzled to find users in China, Israel and Sri Lanka! Welcome.

If you haven't already downloaded Spokane Historical do so now for your iPhone or Android. No smart phone? Explore our content on the web. There is a lot of good stuff, over 150 sites in Spokane and Cheney, with more on the way.
Posted by Larry Cebula No comments: Links to this post

Explore Some Small-Town Museums with TinCan

I am continuing to keep the blogging light to work on some pressing projects. Here is something neat that I discovered the other day Tin Can's Youtube channel, which includes a series of short video visits to small-town museums in our region.

Every small-town in eastern Washington seems to have a history museum, but they are hard to visit. Most are staffed by volunteers, open only a few hours a month, and have little or no web presences. So these videos are a real service. They were produced as a part of the grant-funded Inland Northwest Memories Project.

These videos are good but by no means exhaustive--there are dozens of additional small-town museums within an hour of Spokane. It would be nice to see someone pick up this project, perhaps as a part of a film course at a local university.
Posted by Larry Cebula No comments: Links to this post