Ever wonder about the grand bronze statue downtown? No, not Abe Lincoln--the other one. The dashing young man in uniform
who perches in front of the Spokane Club, leaning on his sword and staring down the traffic on Monroe with steely-eyed determination? That is John R. Monaghan, who died because of a book.

In 1890, Alfred Thayer Mahan published his magnum opus, The Influence of Seapower Upon History. Thayer was a geopolitical strategist and an admiral in the United States navy, and he argued that throughout history great empires had flourished not by controlling large land areas, but by ruling the seas. America, Mahan wrote, should build up its fleet and seize islands that could function as naval coaling stations around the world. The book had a huge influence on policymakers in Washington D.C. and the world over--which would prove bad news for a jug-earned Spokane teen named John R. Monaghan.

Monaghan's father James was an early settler of the region who made a fortune in mining and railroads. He sent his son to Gonzaga College, where John was in the first graduating class of 18 students. As ambitious as he was privileged, young Johnny went east to the Naval War College, where he likely took a class or two from Admiral Mahan.  Fueled by the admiral's writings, the great age of American Imperialism was underway, and Monaghan was its eager instrument. 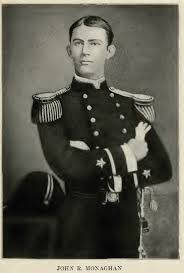 Aboard the battleship Olympia, Monaghan saw service across the wide Pacific. He took part in naval shows of force in China and Japan. He participated in the ceremonies marking the forced annexation of Hawaii into the American domain in 1898. He helped intimidate Nicaragua, where America was considering building a canal to link the seas. It was heady work for a young naval officer from Spokane.

Monaghan's luck ran out the next year, in Samoa. Since the 1880s the islands had been caught in an imperial tug-or war between the United States, Britain and Germany--none of whom thought the Samoans themselves had a particularly strong claim to their homelands. In 1899 the USS Philadelphia, with Ensign Monaghan on board, was dispatched to quell the pesky natives.

It did not go well. Monaghan's shore patrol was ambushed by Samoans, who had been provided modern arms by rival European powers. The leader of the expedition fell under heavy fire, as did a number of the enlisted men. Monaghan tried to rally the men and rescue his wounded commander, but the navy men were outgunned in unfamiliar terrain. Monaghan died, and the survivors beat a hasty retreat. He was 26 years old.

A defeat, far more than a victory, needs a hero. Monaghan was pressed into service one more time. "The men were not in sufficient numbers to hold out any longer, and they were forced along by a fire which it was impossible to withstand. Ensign Monaghan did stand." the official report would read. "He stood steadfast by his wounded superior and friend—one rifle against many, one brave man against a score of savages. He knew he was doomed. He could not yield. He died in heroic performance of duty."

On October 26, 1906 the Ensign John R. Monaghan Memorial was dedicated in Spokane with suitable pomp and circumstance. Five thousand Spokanites turned out for what the Spokesman-Review
described as "eloquent addresses" and a "magnificent parade" a mile in length, that included every active military man, veteran, and marching band the city had to offer.

If you go to see the memorial today you may be struck by the dramatic bronze bas-relief panel on the pedestal, supposedly depicting the death of Ensign Monaghan at the hands of the Samoans. Monaghan is pictured at the very moment of his death, falling heroically in the familiar 19th-century manner of Davy Crockett or George Custer. Strangely, the Samoans look more like Africans than Polynesians, and in place of the modern weaponry they carried that day are shown using bows and spears. The artist rewrote the history of the incident to play up the very stereotypes of "savages" that were used to justify things like conquering and annexing islands on the other side of the world. 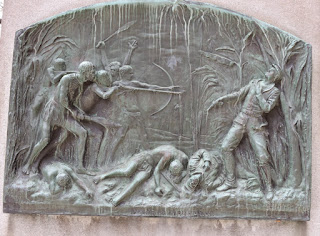 And what of Alfred Thayer Mahan, whose book might be said to have sent young Monaghan off to war in the first place? He continued to teach at the Naval Academy, eventually running the place. He died just before the outbreak of the First World War, itself in part a product of the rising tensions of the naval arms race his thinking had produced.

All very sad.
And that plaque is an example of artistic license going way too far. Pretty bizarre.

It is strange! I am guessing that when the statue was made, there were almost no accurate images of Samoan people available in Washington State.

Ye Olde Curiosity Shoppe on the Seattle waterfront has been there since 1899. I haven't been in since they moved to their new digs on the other side of the ferry dock, but my recollection from quite a few years ago is that a considerable portion of their inventory consists of items collected from all parts of the Pacific, including Polynesia.

I'd check out the Godeffroy and Sons shipping line out of Hamburg for images of Samoan culture on the American west coast before 1900. There was a gold rush in California in 1849 and one in the Klondike in 1899, but in between there was a gold rush in Australia and Germans participated in all three. Sutter's Mill was owned by a German and discovery of gold there started the California gold rush. Donald Trump's grandfather, Frederick Sr., walked away from the Yukon in 1901 with enough gold in his pockets to get himself deported from Germany.

My dad's family sailed across the Atlantic in 1855 and 1856 to Wisconsin. More of the family would have joined them in Wisconsin, but the Civil War got in the way so instead they went to the Australia Gold Coast aka Brisbane. The Godeffroy family had done well in the Great Lakes fur trade until the French abandoned their claims on North America and they gradually shifted their emphasis to the South Pacific copra trade. Between 1850 and 1900 they had a virtual monopoly on shipping in the South Pacific. The Presidio in San Francisco was better known then as the Prussian Consulate. German surnames in Polynesia are almost as prevalent now as Tongan and Samoan surnames. Maugham's Sadie Thompson from the short story Rain had a German surname. German communities in western Washington would have been quite familiar with Tales From the South Pacific long before Michener put them on paper.

Readers of Robert Louis Stevenson before 1900 would have been familiar with Samoan culture as the last years of his life and and several of his last works of fiction were set in Samoa.