Some time back I posted about a unique class project that I was forcing my unwilling students to do using to enrich my class on Local History Research Methods--the Ghost Sign Project. I thought I should bring the subject up-to-date.

Ghost signs are those faded, painted advertisements that you see on the sides of buildings in the historic areas of many American cities. Painted in thick layers of lead paint, many have long outlived the products and businesses they were created to advertise. In the spring of 2013, my students fanned out across Spokane and did an inventory of the surviving ghost signs.  I thought it would be fun to have my students map and record as many of the signs as they could find, then research the background of these vanished businesses.

The assignment worked better than I dared imagine. The students loved prowling the alleyways (always in pairs!) and finding the old signs. They became quite competitive, trying to see who could find the most. They took with them clipboard, cameras, and a form that we developed together to record their data. You can see the form here.

An online version of the form, created by my student Frank Oesterheld, automagically dropped their information into a Google Fusion Table. This generated a map of the ghost signs of Spokane:

Pretty cool, yes? We found signs for blacksmiths and buggy manufacturers, for early car dealerships and Single Room Occupancy hotels, for cigars and chewing tobacco, for paints and coffee and flour. All in all the signs, most created between 1890 and 1920, painted a picture of a workingman's town where people wanted an inexpensive place to stay and a cheap cigar.

Then we took to the archives to research the histories of the signs. City directories and Sanborn maps were the most valuable sources, but we also dug through Google News Archives, historic register nominations, census records, marriage and other vital records, and oral histories. I told my students to look for interesting stories behind the signs--stories of the business, stories of the owners, stories about the kind of town that Spokane was during the era in which their sign was painted. They found some great stuff, including Japanese hotel owners, the era of cheap downtown lodging, life in the rail yards, and Spokane's "cracker war." The stories were written from our local history smartphone app and website, Spokane Historical. The best of them appear there as a walking tour, Ghost Signs of Spokane.

It was a tremendously successful class exercise. And yet when class was over some of us felt like the topic was not exhausted. How else could this research be presented?

This spring two of my graduate students, Anna Harbine and Frank Oesterheld, developed a face-to-face walking tour of the signs that they would lead. Adapting the digital to the analog proved an interesting challenge. Which signs do we include? How far do we want to walk? Should the tour be one-way or a loop? Oesterheld and Harbine chose a route, developed scripts, and practiced the walk a half-dozen times. Last Friday they went live, leading a group from the Northwest Archivists Conference through the back alleys of Spokane in search of ghosts. It was a hit! Here are some pictures of the event, taken by Benjamin Helle of the Washington State Archives ~ Olympia Regional Branch. Here we are getting started: 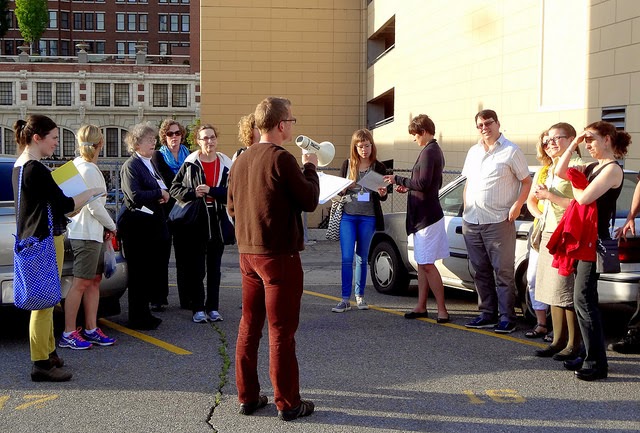 Don't despair if you missed the tour, we are looking at ways to make it happen again, perhaps as part of a First Friday event.

As a teaching exercise in public history, I am delighted how this project has evolved. The class itself was part research seminar and part treasure hunt, both educational and engaging. They course laid the building blocks of a digital tour, and then a physical tour, also spearheaded by public history students. Four of the students in the course also presented their work as a poster session at the National Council for Public History conference this spring. The project built a lot of bridges with the local historic preservation community and most importantly brought attention to some of my students and their work.

I teach Research Methods in Local History again in the coming school year--what should we do as a group research project next time around?
Posted by Larry Cebula