I just discovered this series of short videos about the history of Avista, formerly Washington Water Power, online at KSPS. There are ten in all, covering topics from the earliest years of the company to (my favorite) the cartoon advertising icon Reddy Kilowatt.

There is hardly a more historic company in the Inland Northwest than Washington Water Power. Established before Washington was even a state, the company has been at the center of everything from the Great Spokane Fire to the building of hydroelectric dams to modern architecture to Expo 74. In recent decades, as the company changed its name to Avista, it seemed to move away from its history as well as its former name.

Now, on the 125th anniversary of Washington Water Power, there is a renewed commitment to that history. The company produced a rather good 40 page booklet on its history, and has additional historical materials on the company website. And then there is the ten-part series of minute-and-a-half documentaries. 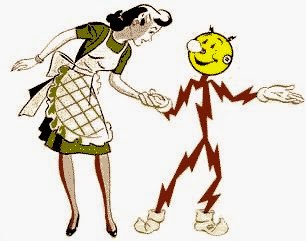 These are well-made, but very much from the company point of view. The first details the role of WWP in the Great Spokane Fire of 1889, it is interesting and full of wonderful images. I especially like this one about the 1940s Home Service Program, in which female WWP employees fanned out across the region to show homemakers how to use the latest electric home appliances. Others show early dam building, electric-powered streetcars, and other aspects of WWP history.

Overall, the videos feel more like historically-tinged advertisements for Avista than historical documentaries. This is local history through the rosiest of lenses. An episode named The Fight for Survival even details how WWP fought off the "threat" of becoming a public utility district in the 1950s. Thus was socialist tyranny averted. And the two videos that deal with dam construction have literally no mention of the environmental impact of such projects, or the terrible blow they were to native peoples. None of the videos show any awareness of the larger historic picture of their times--the Great Depression, Cold War culture, or any of the other topics that could have enriched these pieces and made them more interesting.

I suspect that what happened here is that the videos were produced with internal expertise and an outside advertising firm--but they forgot to hire a historian. Still, perhaps these are petty complaints about what are after all a set of 90-second infomercials. It is good to see Avista once again interested in and promoting its own heritage.
Posted by Larry Cebula

Washington Water Power is submitting an article for the local history publication Latah Legacy set to come out by the end of the year. I'm told in this article Washington Water Power will chronicle their history and their impact to the community throughout the years. To receive your copy, be sure your membership to the Latah County Historical Society is current.