Patrick Henry Said What?: Or, How to Fact-Check an Internet "Quote"

An unfortunate side effect of this information superhighway thing is that a lot of the information that gets passed along is wrong. This is as true of historical information as any other kind. The web is crowded with imaginary black confederates, crank constitutional theories, and historical "quotes" that no one ever said. 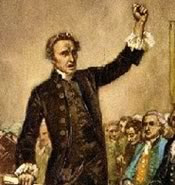 A former student of mine is always putting up one historical "quote" or another from Brainy Quote or ThinkExist on his Facebook page. These sites are full of made up and real quotes side by side (Mark Twain in particular suffers terribly at their hands, along with the Founders and Yogi Berra). And these websites seem to plagiarize one another with abandon, so once something is out there, it is everywhere. So now I tell students to trace their quotes back to the source: "Find me the document by that person that is the origin of the quote," I tell them.

Sounds great, patriotic and stirring and making a political point that has considerable modern-day relevance. But Patrick Henry never said it. He never wrote it. It is fake.

How can I be so sure? Google books is often a good source for getting to the facts. Here is the search. We see that the Henry quote appears in ten books from the last 15 years, including the Congressional Record (apparently by Representative Walter B. Jones of North Carolina), The Politically Incorrect Guide to the Founding Fathers, and
Chuck Norris' magisterial Black Belt Patriotism.

Yet the alleged quote appears not at all in any earlier works--not in any of the hundreds of books of Henry's writings, books about the constitutional debates, or biographies of Henry that are in the Google Books database. In fact it first pops up in print in 1994 (dawn of the internet era!) in a political book. If Henry really said something so quotable in his lifetime it is inconceivable that no one thought to quote it until 1994. The quote is a fake.

Further evidence that the quote is spurious is that it does not sound like Henry, who was after all an anti-federalist and opposed to the constitution, which he considered a Federalist plot. Hell, Henry refused an invitation to the Constitutional Convention in 1787, famously explaining "I smell a rat."

I could have performed this exercise with hundreds of other "quotes" from the Founders that you see plastered on bumper stickers and misspelled on Tea Party signs. So where do we look for real, verified historical quotes? My first suggestion is to read the primary sources. If you want to know what any one of the Founders thought about the Constitution read his collected writings. You could begin here. These are men whose thoughts on government were for the most part highly nuanced and sophisticated. No one-sentence take away, even if it is verified, is going to capture the richness and complexity of their thought.

OK, some of you are not going to do that. If you must go to a quotations website, use Wikiquotes. A spin-off  of the Wikipedia project, Wikiquotes tries to raise the bar by organizing the quotes into three categories: "Sourced" for verified quotes, "Attributed" for quotes whose provenance is uncertain, and "Misattributed" for things that are flat out wrong. It is a good idea, but crowd sourcing is only as good as the crowd, and as of this morning their Patrick Henry page included the fake constitution quote as "Sourced!" I fixed it--let's see if it stays fixed.
Posted by Larry Cebula

As you point out, this one doesn't even pass the smell test, since Henry opposed the Constitution on the grounds that Henry believed it constrained the people's liberties.

Followed your suggestion with a Madison quote that's currently circulating:
"We are free today substantially but the day will come when our Republic will be an impossibility. It will be an impossibility because wealth will be concentrated in the hands of a few. A republic cannot stand upon bayonets, and when that day comes, when the wealth of the nation will be in the hands of a few, then we must rely upon the wisdom of the best elements in the country to readjust the laws of the nation to the changed conditions."
Earliest attribution I could find was 1901 Proceedings of the National Labor Socialist Party.
Thanks for the inspiration!

Hey, Matt, what a way to go! You create a phony attribution to comment on a article about how to fact check phony quotes. The National Labor Socialist Party was not founded until 1935.

Geez, Starman, so quick to make an accusation of bad faith! Did you learn how to debate on the internet?

A search for "A republic cannot stand upon bayonets" on the Google Books database (http://bit.ly/USDgjF)does indeed turn up a use in 1901 in something called Proceedings of the National Convention of the Socialist Labor Party.

The phonier it is, the more people keep reposting it...