[Note: This is cross posted over at Civil War Memory.]

The Civil War Preservation Trust has just released a video decrying the proposed building of a casino near Gettysburg National Battlefield. I think the video is wretched and illustrates nearly everything that is wrong with how we remember and memorialize our history in this country.

Some background: A developer wants to open the "Mason-Dixon Resorts Casino" within an existing hotel and convention center a half-mile from the boundary of Gettysburg Park. Pennsylvania has allowed casino gambling since 2004, starting with slot machines and now including table games such as poker. A 2005 attempt to build a casino in Gettysburg was defeated. Now the developers are trying again, and the Civil War Preservation Trust and others are fighting back, in part with this video:

My objections to the video, and the cause, are as follows:

1. Why do we care what Sam Waterston and Matthew Broderick think about this? They are actors, people! They only pretended to have fought at Gettysburg. McCullough was the only real historian they used for the production. Show me David Blight and we'll talk.

2. The battlefield as it currently exists is hardly pristine--whatever that might mean in such a context. You can hardly swing a dead cat without hitting one gigantic monument or another. Now these monuments, many erected by battle survivors in the years and decades after the fight, are interesting historical artifacts in their own right. But they represent a tremendous departure from the way the field of battle might have looked on July 1, 1863. Beyond the matter of the monuments, the landscape is different from what it would have been in 1863. The trees have grown in (though the National Park Service is currently working to restore the 1863 landscape), the open fields are full of grass instead of crops, jets fly overhead. The smell of powder and rotting flesh are gone... It is not as if the battlefield were immaculately preserved and about to be ruined.

3. My strongest objection to the video is the fetishistic treatment of warfare as a sacred activity more meaningful than other human activity. We can't have people gambling, for God's sake, it cheapens the memory of three solid days of people slaughtering one another. Susan Eisenhower (whose expertise is helpfully captioned as "Grandaughter of President Eisenhower") complains that the casino is an attempt to "exploit the brand that is Gettysburg." But surely gambling is more wholesome than people lining up to blow one anothers' limbs off? 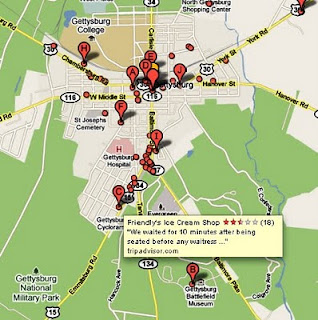 4. This is selective outrage. The proposed casino will be a half-mile from the boundaries of the park and in an already existing hotel complex. (I had to look that up, the Civil War Preservation Trust would have you believe they are ready to bulldoze Little Round Top to make way for the slots.) A quick Google Map search for "shops" shows dozens of commercial businesses roughly the same distance from the battlefield, including the Cannonball Olde Tyme Malt Shop and Dirty Billy's Hats. Thr problem with this business, as the video makes clear around the half-way point, is that people will be gambling, and gambling is bad. I actually agree that gambling is a social ill, but it is also legal in Pennsylvania, like selling ice cream and hats.

5. My God, the over-the-top rhetoric in this video is terrible. It discredits not only the cause but the very idea of historic preservation. We are told that the casino will somehow "prostitute" the site. If this casino is built, we are assured, other casinos will pop up like toadstools at the Washington Monument, Arlington National Cemetery, Ground Zero, Lincoln Memorial, and presumably, your grandma's grave.

6. Where does it end? There were perhaps 10,000 conflicts within the Civil War. This National Park Service page lists hundreds of them. And notice that the anti-casino forces are objecting to something that is not on the federally defined battlefield at all, but nearby. One person calls for a "buffer zone" around the park--but how wide that buffer is supposed to be, and what commercial activities will be allowed within it, are mysteries.

The campaign to block the casino is not a legitimate effort of historic preservation. It is a moral panic being propagated by Puritan scolds. And it reminds me terribly of another current attempt to use history to block American citizens from exercising their rights to build a legal facility on their own land. Civil War Preservation Trust, meet Sarah Palin.
Posted by Larry Cebula

I love the CWPT (I have their bumper sticker on my car), and I am a big proponent of historical preservation, but I agree with you. As long as they are not building on the actual site, I don't see what the big deal is. I've been to Gettysburg (when that stupid watchtower thing was still there), and I very much doubt you can see the casino from the battlefield. Preservationists sometimes don't get looked at too kindly from a country wanting to build bigger and better things, and should pick and choose their battles more wisely.

So I suppose you're not morally outraged at the fetishizing of death here?

Larry,
If your objection to making a fetish of violence is so great, why didn't you bring it up on your post of August 2, where you simply made the note that a re-enactment of a Wild West shootout was something to cater to tourists? I would think with your sensitivity to the violence perpetrated against Native Americans for the entirety of American history might attune you to finding some moral fault with the valorization of the very perpetrators of that violence. Not to read too much into your post on Cody, but isn't your point there that the creation of authenticity to attract tourism is acceptable (even if it commemorates something that is morally outrageous)? Wouldn't that be an argument AGAINST the casino in Gettsyburg?

Raffi and Anonymous: Thank you for taking the time, both to flip through my archives looking for some club to wield, and for your comments. I don't really get your point or think that you read either post very carefully. The point about Gettysburg was that I object to the idea that violence makes something sacred, and that some decidedly no-violent activity on that same site is therefor blasphemy. I don't get that. And no one is pretending that the mock gun fight at Cody is sacred. It is actually quite humorous, and the two sides blast away at one another at close quarters with no effect as a crowd of tourists looks on. Thus the title of the post!

Larry, I didn't flip through your archives. I'm not trying to cudgel you, I just want to engage you on the level of argument. Your post about Gettysburg that I referenced was on the same browser page as the link from Kevin Levin's site (perhaps it is different on your internet browser, and thus did not necessitate any supposed flipping through your archives [I use Mozilla Firefox, perhaps your browser might necessitate a click beyond what you are delivered to]). I just thought that you condemned the glorification and commodification of violence from what you posted in your point #3 (and maybe I'm not reading your post quite closely enough, but you object to commodifying the idea that violence is sacred [as CWPT does, according to your post]) and place that commodifaction on the same level as any other mode of commodifaction (the Casino). It might be worth admitting, that this particular Casino commodfies the violence at Gettsyburg (why aren't they trying to build it at Carlisle, Cashtown, Hanover, Chambersburg, or Littlestown). I'm just curious why you take particular outrage at the CWPT's attempt to make violence sacred to their ends, when in recent posts you've treated violence as merely humorous and worthy of a snide title? Is it only objectionable when someone tries to commodify violence as something sacred, rather than just trying to commodifying violence in general?

Anonymous #2: Oh I object to the CWPT video on all kinds of levels, most of which boil down to its emotional tone and intellectual dishonesty. I don't think the casino necessarily commodifies violence at all (though if they commission a huge mural of Pickett's charge to hand over the roulette table I will cede the point!). The casino developer simply seeks to place his business where there is a lot of traffic.