The Wikipedia War Over Obama's Inauguration

The Wikipedia War Over Obama's Inauguration: "Shortly before 11:00 a.m. EST on Tuesday, President-elect Barack Obama's motorcade sped along Pennsylvania Avenue in Washington, headed towards the Capitol. But Wikipedia couldn't wait." A fun article about a minor skirmish in the ongoing Wikipedia "edit wars," this one involving the status of Barack Obama. 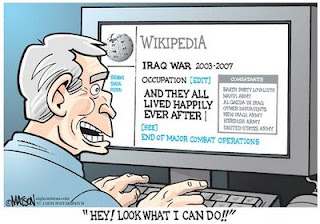 You can see the remains of the battle on the Wikipedia talk page for Barack Obama and the history page. This being Wikipedia, you can even view the very first Barack Obama page, created at 09:56 on July 28, 2004: "Barack Obama (born August 4, 1961) is a Democratic politician from Chicago, Illinois and only the third African-American to deliver a keynote address at a Democratic National Convention. A state legislator and law professor, Obama is currently running for the United States Senate from the State of Illinois, which would be the highest elected office he would hold thus far. If successful, Obama would be only the third African-American senator since Reconstruction. In Swahili, the name Obama means 'one who is led by God.'" Our president has had a very swift ascent!

Wikipedia is the elephant in the room in most discussions of digital history. We all know it is there and important but as professional historians we try to ignore it. You know that opinionated 19-year-old in your survey class, the one who is speaking up all the time, the guy with the loud voice who is always correcting you with some wrong historical information he learned on the internet last night? Well he is editing Wikipedia right now. For most teaching historians our approach to Wikipedia is to hope it goes away. (This is also our approach to Rate My Professor.)

Yet our students turn to Wikipedia as the information source of first resort, and we need to understand how it works. In my Public History course we recently read "The Charms of Wikipedia" by Nicholson Baker, a good and amusing introduction to the online encyclopedia. Personally I have no objection to students using Wikipedia exactly as they would any other encyclopedia--as a handy place to check basic facts and to begin research, but absolutely not an acceptable source of research for a college-level paper.

I actually assign some Wikipedia articles from time to time, such as Land Ordinance of 1785 and the related articles Northwest Ordinance, Public Land Survey System, and Northwest Territory. These articles are Wikipedia at its best, giving simple explanations of how the public lands of the United States were divided. It is important basic information in a class on Western History, but too often neglected in textbooks.

More problematic are the articles on controversial topics--Robert E. Lee, Zionism, or Leon Trotsky. The talk page on Trotsky warns users that "This is a controversial topic that may be under dispute." You think? "Please discuss substantial changes here before making them, 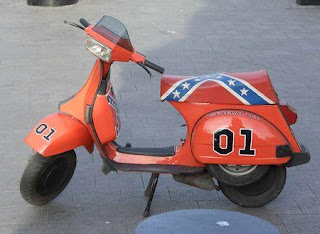 making sure to supply full citations when adding information, and consider tagging or removing uncited/unciteable information," the warning continues. The talk and history pages of all three articles bear the shrapnel and bomb craters of full-scale edit wars, complete with multiple reversions and accusations of vandalism, personal invective, and banning of troublesome editors. For example on March 19, 2008 an anonymous user replaced the entire text of the Lee article with "I HATE HISTORY SOOOOOOOOOOO I WONT TELL YOU ANYTHING MUAHAHAHHAHAHAHAHAHHAH!!!!!!!!!!!!!!"

At the end of the day Wikipedia becomes what most of it's users want it to be. So the article on Lee is generally admiring and minimizes and excuses his life-long support of slavery in a way that makes this historian uncomfortable.
Posted by Larry Cebula

I have had students reading Wiki as I'm lecturing. they'll then raise their hands at some point and say "But here it says that Rome was, in fact, built in a day." It's never even a question--just "but Wiki says."

Andrew: I think we have to address this head on--spending some time in every class early on to show what Wikipedia is good for and what the problems might be and how it compares to other encyclopedias.

Also--it may be that some students are pulling your leg about what Wikipedia actually says!

I agree, Larry. We have to hit it head on. I'm planning to spend significant time in my F2F classes this year going through wikipedia entries and illustrating to students what is "right" and what is "wrong". The biggest challenge is that if I assign 2 journal articles and a web page from the PBS series on the presidency, it means the students have to cite those sources and not all jump to the wikipedia entry while BYPASSING the assigned reading. So, I'm working on ways to better explain that this semester since I assumed it was obvious. However, it's obviously not since students outright cite wikipedia in spite of the assigned articles. So, they really don't know and it's incumbent on us to show them.

I also have had them read Rosenzweig's article. Now I can add your blog post on this to their assigned readings.

Kelly: A useful exercise would have the students trace the history of a given entry from the beginning. A nice Wikipedia feature (and the Wikipedia software is very sophisticated, if idiosyncratic)allows users not only to see every version of each article that has ever been posted, but to compare any two versions side-by-side.

Great article, Larry. It's time for historians and other scholars to stop treating Wikipedia like the redheaded stepchild. Obviously the fact that anyone can edit it isn't the biggest problem. The problem is that students still don't understand how to read and utilize primary and secondary sources of any kind. Just because it's online doesn't make it a second rate resource. It just means we have to do a better job of teaching how to use it.