Which Spokane Historical Markers are Most Likely to be Removed?

Americans are involved in a national reconsidering of our history right now, and particularly of historical monuments. Statues of treasonous Confederates, in particular, are dropping like flies. Columbus is faring poorly as well. Even former saints like Washington and Jefferson are being reconsidered.

I have nothing deep to add about the national debate on statue removal. I'll just say that 1) a LOT of these guys up on some pedestal were pretty unsavory, by the standards of their own times as much as ours, and 2) these are just lumps of rock and metal, so let's chill a bit. Reasonable people can differ, and do so politely.

The statues controversy has come to the Inland Northwest, and the Spokesman-Review had a good pair of stories the other week on some potentially controversial local sites. So I thought I would take a crack at the topic with a different twist--which historical markers, statues, place names, and monuments are the most likely to be removed in the next few years? 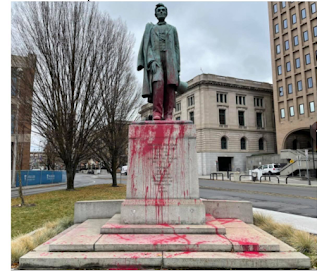 Perhaps Spokane's best-known historical statue, a 12-foot high Abraham Lincoln defends a small triangle of parkland on Main and Spokane Falls Boulevard. The sculpture was funded by school children, and the current public reputation of Lincoln is high. Unlike the controversial Emancipation Memorial in Washington D.C., which many believe is paternalistic, Spokane's Lincoln stands alone, upright and determined.
However, Lincoln's reputation is being reconsidered by many Americans these days, particularly his ordering the mass hanging of 38 Dakota men in 1862--the largest mass execution in American history. Just the other day the Lincoln statue was splashed with red paint in protest. OF course, Lincoln did a lot of other things besides the unjust hanging of those Lakotas, including putting down the slave-owners rebellion and issuing the Emancipation Proclamation. If I had to guess, I think that the Lincoln statue will weather this storm.
Safe--Vietnam Veterans Memorial 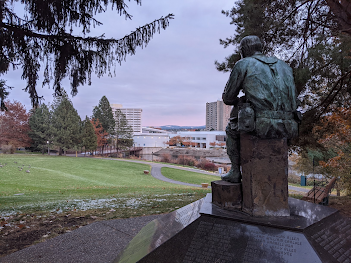 Spokane's best historical memorial is this statue located on an (artificial) knoll in Riverfront Park. The statue is of a tired soldier, seated, taking a break to read a letter from home. He looks out over the city skyline. It is a wistful and evocative memorial to a failed war. And that is the key thing--the Vietnam Veterans Memorial does not celebrate the war, it mourns it. Despite a misguided effort a couple of years ago to move the statue to in front of the Spokane Coliseum, it seems secure in its present location. 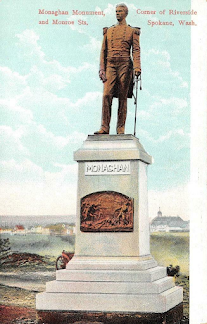 A recent Spokesman article pointed to the statue of James Monaghan, located downtown a stone's throw from the Lincoln statue, as particularly problematic. And that is true as far as it goes. Ensign Monaghan, the first person in Washington to attend one of the military academies, died in 1900, in an attempt to impose American rule over the Samoan islands. He was killed in battle by some Samoans who were defending their homeland. Furthermore, the plaques on the statue's base are overtly racist, referring to the Samoans as "savages."
Nonetheless, I suspect this statue will survive, and for one simple reason. Almost no one in Spokane has any idea who James Monaghan was. Or where Samoa is. Or that we had a war and now there is something called American Samoa and it is a United States Territory. Sometimes obscurity is the best defense.

Dicey: Hangman Creek (the geographic place name, not the monument) 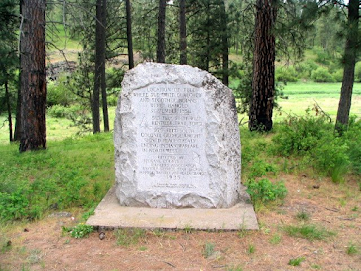 Hangman Creek is named for an incident in 1858 where George Wright murdered a group of Native at his camp along the creek near present-day Waverly. A stone historical marker at the spot is often visited by people who leave small gifts at the site to memorialize the slain.
Over the century-and-a-half since the murders, there have been various efforts to change the name, usually back to the Native "Latah" Creek (see this 1885 clipping from the Spokesman-Review). Today the creek shows up on maps as either Latah or Hangman, with little consistency. So will the name be changed to Latah?
I think this one depends on the tribes, particularly the Spokanes. While there has been no official statement from the Spokane Tribe that I know of, a couple of years ago I was in a meeting that included some Spokane tribal members who were adamant that the name Hangman be retained. They wanted Wright's crimes to be remembered. IF the tribes ever came out with an official statement that the name "Hangman" be removed, I think that would be honored.

George Wright was a straight-up murderer. Wright killed Native prisoners he had taken after 15-minute sham "trials" that he had no authority to conduct. Late-19th century Americans saw this as a good thing and named roads and military bases after him. Early 21st-century Americans see things otherwise. And unlike Lincoln, Wright did not help end slavery.
In October of this year, the Spokane Tribe asked the city to change the name of Fort Wright Drive to Whist-alks Way, after the Spokane wife of the Yakima Chief Qualchan, who was one of the men that Wright murdered. This is very likely to happen, and soon. 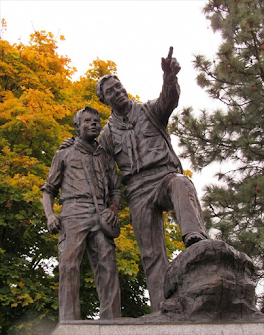 "Wait," you say, "Spokane has a Boy Scout statue?" We do. The memorial, "Footsteps To The Future," is just off the northeast corner of the Monroe Street Bridge. "So?" you answer, "so why would it be removed?"

The statue was planned in the early 2000s as a celebration of 100 years of Scouting in America. Even as local planning was underway, investigative reporting by the Washington Times and other was revealing deep problems with child sex abuse in the Boy Scouts, and a pervasive culture within the organization of covering up such sex abuse. Spokane's statue was erected in 2009, one year before the court case Lewis v. Boys Scouts of America et al. which revealed the decades of coverups of child sexual abuse by the Boy Scouts of America. And there were local connections as well.

Given the 2009 timing, "Footsteps To The Future" can be understood as a response to the scandal, a denial of the suffering of the victims. And look at the thing! A male scoutmaster has his arm draped casually around the shoulder of a boy of maybe 10 years of age. The man points at something in the distance. "Timmy," he seems to be saying, "do you like wrestling movies?" The scandals regarding the Boy Scouts of America have not slowed since 2009, and the national organization has filed for bankruptcy. I predict that this statue will one day quietly be removed.

There are many more statues, memorials, and place names in Spokane that could well be questioned as we reexamine our history. Sometimes I hear people say "When will this stop?"