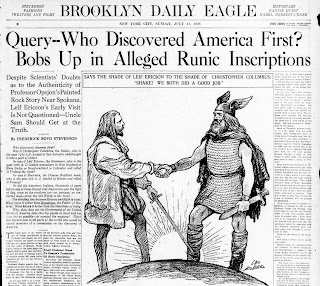 On July 11, 1926, the New York City readers of the Brooklyn Daily Eagle took up a question that perhaps none of them had previously considered. What were they to make of the alleged discovery of Viking runes in Spokane, Washington? "Query--Who Discovered America First? Bobs Up in Alleged Runic Inscriptions" screamed the headline, over a delightful illustration of a cartoon Columbus shaking hands with a stereotypical Viking. The caption reads "Says the shade of Leif Erickson to the shade of Christopher Columbus: 'Shake! We both did a good job!'"

The story was Brooklyn's introduction to a dispute that had been simmering in the northwest for some time, concerning the controversial and entirely imaginary discoveries of Spokane's own Oluf Opsjon. The article described the "latest" discovery of Norse inscriptions by Opsjon, "on a great bowlder of lava rock just north of Spokane, Washington."

Opsjon claimed to have deciphered the runes and that they told a story of a great battle between a band of Viking families and local Indians in the year 1010. Twenty four Norse men and seven women were attacked at a spring beside the boulder. The men put the women atop the rock for protection but it was of no use, all but a few were killed by the Indians. The survivors returned a few days later to bury their dead and to write the story of what happened on the rock in what Opsjon said was "indelible paint." (Interestingly, another report mentions that "the burial mound is plainly visible" but "will not be disturbed, as it is thought it would not contain anything of value to historians.") The Eagle's story was largely taken from an account that ran in the Spokane Daily Chronicle a week earlier, "FIND VIKING GRAVE NEAR CITY."

The Eagle did note that historians and scientists "almost without exception" rejected Opsjon's findings. But since when have scientists and historians been able to put down a good story?

The Brooklyn Eagle mentions another set of runes that described "Norseman swimming for their lives across the Columbia River, fleeing hostile Indians" discovered by Opsjon in Grant County. Opsjon claimed to have discovered even older inscriptions around Spokane that he was still working to translate. In another interview he spoke of Viking runes discovered "in British Columbia, on the Columbia River near Vantage Ferry, Wash.; in Grant County, Washington, near the mouth of the Columbia River; and Tillamook County, Oregon." An internet search for Opsjon turns up a wealth of contemporary articles about his claims in newspapers around the country and even in the Singapore Straits Times and Popular Mechanics.

Opsjon was in the habit of discovering previously undetected Norse runes in the Northwest. In 1919 he had a public dispute with William Lewis of the Eastern Washington Historical Society regarding the origins of some rock art near Vantage, Washington. While Lewis credited the work to Indians, Opsjon, "a student of archeology who resides near Dishman," claimed they were put there by "early Teutonic exploreers."

Opsjon was building on a long-standing public interest in "discoveries" of lost traces of Viking explorers. In 1898 a farmer in Minnesota unearthed the Kensington Runestone, which purported to be a tale carved by some lost Vikings of their own battles with Indians. The stone was soon debunked as a fake, but believers remained, Opsjon among them. In 1923 another dubious runestone was discovered in Oklahoma. 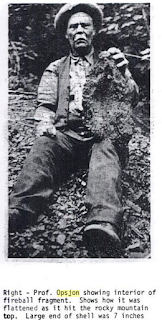 Opsjon was an interesting character. A Norwegian immigrant who came to America in 1894, he became an American citizen in 1905. He first shows up in the newspapers in 1904, when the Spokane Press wrote a sympathetic piece about how a swindler had taken advantage of the "poor Swede" in a land deal. Of Opsjpn the Press wrote: "He is honest. He is poor. All he gets of this world's goods he earns by the sweat of his brow."

The 1910 census has him working as a laborer in the Bunker Hill mine. In 1913 he was living in Saltese, Montana, where he patented an egg crate. According to Indian Rock Art of the Columbia Plateau by James D. Keyser, Opsjon pushed his Viking theories in Spokane papers a dozen times between 1919 and 1927. Opsjon also makes an appearance in an obscure, typewritten book about the lost continent of Atlantis as an expert in meteors--the only image of him I have been able to find.

Though we know now that Vikings did explore a bit of the northeast coast, and even established a short-lived settlement in Newfoundland, all of the alleged runes in the interior of North America have proven to be hoaxes, as was that of Opsjon. "Scientists of the Smithsonian Institution do not accept, even with the proverbial grain of salt, the report from Spokane that runic inscriptions found painted on a lava rock in that vicinity mark the burial mound of Norsemen who crossed America more than four centuries before Columbus discovered America," the New York Times reported in 1926.

Oluf Opsjon died in 1943 in Spokane, his imaginary Vikings long since forgotten.