A Lone Confederate (and the Lost Cause) in Eastern Oregon

Behold the headstone of Thomas Carter Steele, who died in 1878 in Prairie City, Oregon, a long ways from home. 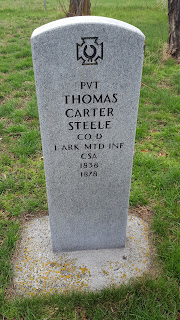 A recent discussion about cemeteries and veteran's grave markers got me to thinking about Civil War veterans here in the Inland Northwest. In eastern Washington, in particular, white colonizers arrived in numbers in the decades immediately after the war, and so it is hardly surprising that there many of the men were Civil War veterans. The little rural cemeteries of our region are dotted with the distinctive white headstones placed by the War Department to recognize veterans' graves. The Civil War soldiers beneath the white stones are veterans of the United States, not Confederate veterans, who after all fought for the other side. Former Confederates did settle in the Pacific Northwest, but when they died they were not entitled to the War Department headstones.

So I was curious when I spotted this headstone in Prairie City. "PVT Thomas Carter Steele," it reads, and identifies Steels as a veteran of Company D of the 1st Arkansas Mounted Rifles. The stone was obviously more recent than the 1878 date of death. Oftentimes the War Department stones are set beside an older, traditional headstone, but that was not the case here--this is the only marker for Steele, who would otherwise be forgotten entirely. I wondered how it got there, and about the man who lies underneath,

A quick search reveals that the headstone was erected in 2001 by the Varina Howell Davis Chapter of the United Daughters of the Confederacy, along with some local UDC and Sons of Confederate Veterans chapters. An old Angelfire webpage features some tiny photographs of the dedication, along with an invitation to "Come and give a Big Rebel Yell for a real Confederate Hero!" The dedication seems to have been quite the event, with reenactors in costume, speeches, and a bluegrass concert and dinner at the Prairie City Grange Hall. Someone even brought a cake.

The website also includes a biography of Steele, which is fascinating. The ninth of thirteen children, he married in 1857 and joined the Confederate States Army in 1861. Steele fell sick and spent more than a year in hospitals in Chattanooga and Murfreesboro. He rejoined the CSA just in time to be captured at the Battle of Chickamauga and spent the rest of the conflict in a prisoner of war camp in Chicago. The decidedly Lost Cause narrative tells us that "Thomas suffered greatly while in prison. The scarcity of food, extreme cold and lack of sanitation would follow him throughout the rest of his life."

Steele and his family made the six-month journey on the Oregon Trail in 1877. This is late for travel on the Oregon Trail, which experienced the great bulk of migration from 1846 to the late 1860s. It is not known what drew the Steeles to the area, but it may well have been friends or family who had already settled in the region, as Prairie City grew out of an earlier mining camp named Dixie. Steele, who had tuberculosis, might also have been seeking a drier climate to improve his health.

The change did not help. It must have been a brutal first winter for the family, which included Steele's wife Mary Jane and their ten-year-old daughter. Snow was already flying when the Steeles arrived in Prairie City. It is easy to imagine the family, exhausted by the six-month journey, huddling in a primitive cabin or tent as the unfamiliar snow of the high desert piles up outside, punctuated by the worrisome and constant coughing of the tubercular father. By spring Thomas was dead. He was only 40 years old. Oregon was not much kinder to Mary Jane. She remarried in 1879 but died the next year, apparently from complications of childbirth. The newspaper noted that "she left two babies two weeks old."


This lone confederate grave in the Oregon desert points towards some under-appreciated aspects of Northwest History (grad students looking for topics, are you listening?). The first is the migrations of southerners and outright Confederates into the region. The Civil War had a greater impact here, and the population was more divided in its loyalties, that is generally appreciated. Well after the war a few areas within our region maintained a southern flavor.

Another underexplored topic is the continuation of a Lost Cause narrative in the Pacific Northwest. The 2001 dedication of the grave of Thomas Carter Steele was organized and attended by UDC and SCV chapters in the Pacific Northwest--there was at that time, for example, an SCV chapter at the Dalles. Six SCV "camps" remain in existence in the PNW. There are also a surprising number of Confederate monuments and place names in the region.

Finally, this little exercise illustrates the power of cemeteries to tell the stories of local history. As with so many places in rural America, the cemetery at Prairie City has far more residents that the town of Prairie City. Cemeteries were meant to be monuments and reminders for future generations, and read collectively they still tell the stories of these communities. The demographic information on headstones can also be leveraged with digital resources to uncover forgotten aspects of the past.