The Complete Idiot's Guide to Mapping the Kentuc Trail

Behold, the least significant digital history project known to man--a map of the Kentuc Trail that I made last night:

The Kentuc Trail was a route used by early white settlers here in eastern Washington to travel between a crossing of the Snake River and Plante's Ferry on the Spokane River. Mentions of the route pop up a lot in pioneer narratives, including this one by John Smith who traveled on the Kentuc Trail with Colonel Wright in his infamous 1858 attacks on area tribes. I could not find a map online so decided to make one. Here is how I did it.

First, I needed a digital image of some kind of map of the trail. I reached out to area experts and Jayne Singleton of the Spokane Valley Heritage Museum came up with this map, which accompanied an article in the Pacific Northwest Quarterly: 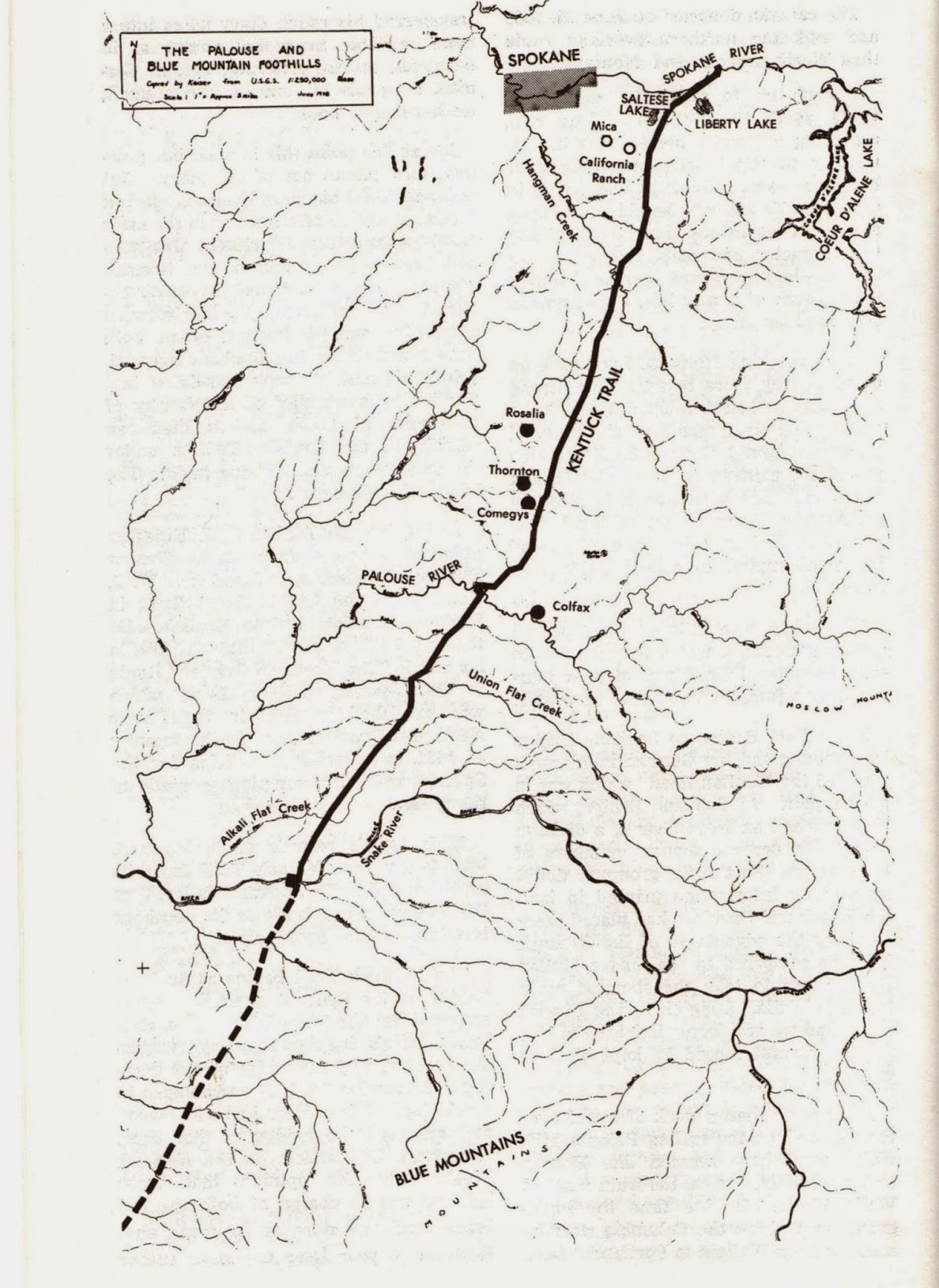 Clearly, it is an inexact map, but that was almost better for me as it meant I could spend less time on the fine-grained details. The next step was to import the above digital file into Google Earth (desktop version) as an overlay, and fiddle with it it lined up with the modern landscape.

This was the only part of the exercise that was kind of a pain, and a case study on why Google Earth has never caught on the way many of us thought it would. Lining up this historic map and the modern landscape required finding some point in common that appeared on both maps. Rivers are great for this--you drag the image around and expand and contract it until the Snake, Palouse, and Spokane rivers on both layers line up. This is easier written than done. The trick is to 1) make sure the waterways layer on Google Earth is toggled on, and 2) mess around with the transparency slider for the image as you go.

Once I had the layers in harmony, I used the paths tool in Google Earth to draw a line along the trail. Now I had the route of the Kentuc Trail as a series of GPS coordinates. If you want to see the final result in Google Earth, here is the KML file.

Now I wanted to share the map, so the next researcher googling "Kentuc Trail"+map actually finds something. The easiest way to share would be to export the route.a custom Google Map--which is something different than a Google Earth layer. I thought I would just be able to create the map from Earth, but noooooo.... Still it was not hard. First I downloaded the KML file of my path layer from Google Earth. Then I opened Google Maps, created a custom map, and imported the file. Name the new custom map, add a short description, and set it to be visible to the public. Done.

Now, I am no Ron Hall or anything but I thought it turned out pretty well. If you drill down the flaws become apparent--I have the trail crossing Latah Creek in the wrong place for example--but I figured that this was still a helpful map for researchers, considering there is nothing else out there online.  And I decided this would make a good quick assignment for a digital or public history class, which is why I go through the steps here. Breaking it down, here is what the classroom assignment would look like:


To the Google gurus out there, let me know if you have any tricks or suggestions to improve this assignment!

I believe that this is also one of the routes surveyed for the Mullan Road.

I've been trying to do something similar in ArcGIS with the itineraries in the Mullan Report (this is not as much fun).

Just wanted to let you know this post was highlighted in my Friday Finds and Follows: 30 January 2015 post on my genealogy blog, AnceStories: The Stories of My Ancestors.

We are currently doing some research on the Texas Road, or the Texas Ferry Road, which was another pioneer trail that linked up with the Mullan Road. I wonder if the Digital Archives, or perhaps EWU has some maps with details of this other popular trial that crossed the Snake River and into the Spokane region.

Larry, I don't know if you have heard about this technology that is being developed at UVA: http://mapscholar.org/

Not sure if it would help this specific project but might be useful for your students in the future.