Lulu O'Hara in the Carlisle Indian School Records (and More)

I was excited to read in Indian Country Today that the student records of the Carlisle Indian Industrial School are now online. The Carlisle school is famous, or perhaps infamous, in American history. Civil War veteran Richard Henry Pratt founded the school in 1879. Pratt was a reformer and a do-gooder and devoted his life to what he saw as helping American Indians to survive--by forcing them to abandon their cultures and adopt white ways. "Kill the Indian in him, and save the man," Pratt once wrote, and at his boarding school Indians from all over the country were removed from their families, the boys had their hair cut, all were dressed in white clothing, and they were taught English and an industrial education. Discipline was harsh, and native languages and cultural practices were strictly forbidden. It is a sad story, not the least because nearly 200 children died at the school.

At the same time, schools like Carlisle (which became a national model for a time) brought together Indians from all over the country and provided opportunities to become acquainted, share notes, and begin pan-tribal networks that would grow into national organization such as the National Congress of American Indians. I knew anecdotally that any number of children from Columbia Plateau tribes had attended Carlisle--what would I find at the new database?

I found a lot, but let me focus here on one individual, a Spokan girl named Lulu O'Hara. Lulu's file, 16 pages long, provides a glimpse into her life. The earliest document is a 1906 "Application for Enrollment in a Non-Reservation School" form. The form gives her name as "Lula" O'Hara. She was 14 year old, had attended the Fort Spokane Reservation School for six years. Her mother, Milli O'Hara, was listed as deceased. Her father was Henry O'Hara, but he appears not to have been in the picture as consent was given by Joseph La Fleur, who signed the line for "Parent, Guardian or Next-of-Kin." (At first I thought La Fleur was her stepfather, but the 1910 Indian census shows that he was her grandfather.) The form lists Lulu's "degree of Indian blood" as "one-fourth" and her tribe as Spokane.

On the Lake Roosevelt National Recreation Area Flickr pool, there is class photograph from the Fort Spokane School that shows Lulu O'Hara. She is in the first row, third from the left: 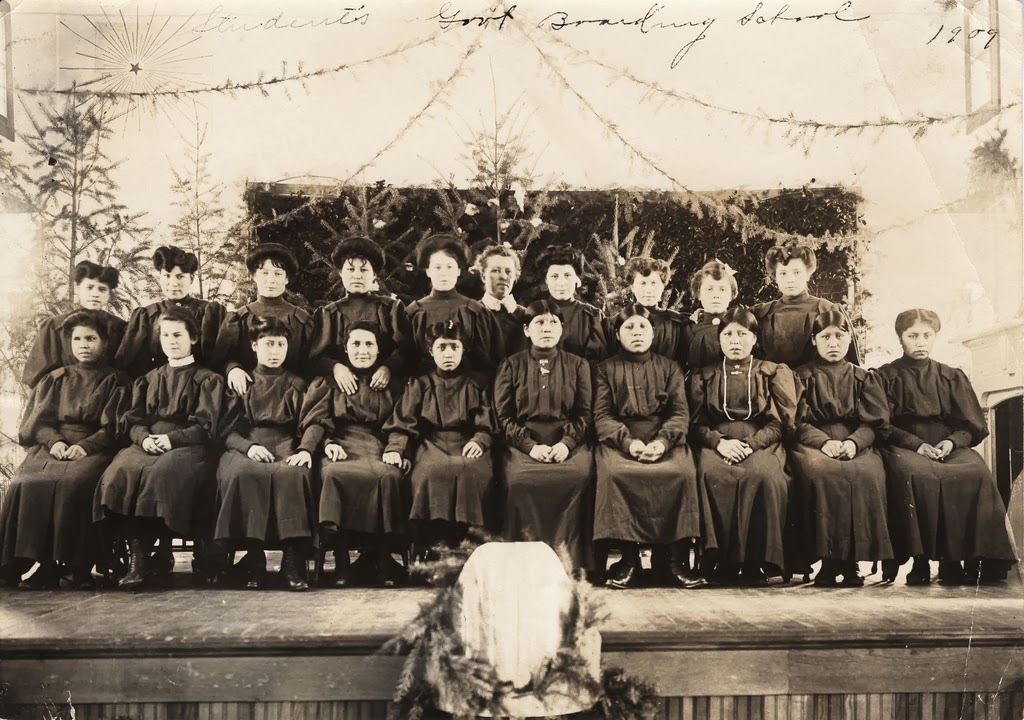 Someone has hand-written a date of 1909 across the top of the photograph, but I note that the person who uploaded the photo to Flickr (my former student Clayton Hanson actually, who was interning for LARO at the time) wrote "Given date is possibly an error." Which it certainly is, since Lulu was at Carlisle by the fall of 1906. Given the Christmas theme of the image, the best probably date is November or December of 1905. A closeup of Lulu show a poised young woman with a stylish haircut and polished shoes, looking confidently into the camera while a fellow student puts a hand on her shoulder.

A sort of progress report card in the file reveals that Lulu enrolled at Carlisle on October 21, 1906, for a term of five years. Her scholarship and conduct are listed as "good" and very "good." She studied sewing and what might be "rug work." By January of 1909 the 17-year-old Lulu was sent to board with a white family, a process known as "outing." Outing was supposed to help Carlisle students learn about white society by living with respectable families, even as they earned a little money. It also reinforced the Carlisle view of the future of American Indians after they graduated, working in either manual trades or as domestic servants.

Lulu was sent to serve Mrs. Harry Shallcross in Coatesville, Pennsylvania. She boarded there from May of 1907 to June of 1909. She must have returned to the house later, as she was visited at the Shallcross home a number of times in 1910 by a Carlisle field agent. He described "a pleasant home in the suburbs of town" and Mrs. Shallcross as "a kind woman, an excellent house-keeper." Lulu's wages were $6 a month and "will increase as she improves." Lulu attended school and a Catholic church, both nearby. "Lulu likes her new home very much. She is learning to cook, which pleases her."

The last outing report, from May 1909, notes that Lulu's conduct is "generally good" and that her wages have increased to $7. Lulu was now 18 and had worked for the Shallcross family for two-and-a-half years. She is described as "improved very much" since she came to work for the family, though "a little sullen at times." Lulu "expects to return to Carlisle June 1 to go home," the agent noted.

The last item in Lulu's folder is a January, 1912 "Record of Graduates and Returned Students" completed by Lulu herself. She was living in Creston and doing "general housework." Asked to "tell something of your present home Lulu wrote "I am living in a comfortable home with people of refinement."

One wonders--what happened to Lulu after that? Carlisle taught young Indians to reject their culture and seek second-class status in white society as mechanics and domestic workers. Many, however returned to Indian Country and their families. Which was it for Lulu?

I cannot find any further traces of Lulu in the public record--except for one source. A 2012 Fort Spokane Educator's Guide from the National Park Service has a snippet from an oral interview with Lula O'Hara about her experiences attending the Fort Spokane Indian School, before she went to Carlisle:

In the dining hall, they always used white tablecloths and napkins on the
tables for the children. The dishes were of white granite with a blue edge.
The cups were always stacked in a pyramid shape down at one end of the
table, and the plates were placed upside down on the table when the
tables were set. There were ten seated at each table. The children sat on
stools along the sides and an older girl sat in the chair at each end of the
table. Everyone stood behind his place until a bell was rung for them to
sit down. There was also a bell for grace and a bell for everyone to turn
his plate over at the same time. If anyone misbehaved, at a table, they
had to sit all by themselves at a small table at the end of the room for all
to see. This was not pleasant, so it worked very well for punishment.

The tone of the oral history and the fact that Lulu was interviewed at all shows that she did return to the Spokane tribe and was honored for her life experiences.

There are dozens of other files for Plateau men and women in the Carlisle Indian Industrial School archives--Colville, Spokane, Nez Perce, Flathead and more.
Posted by Larry Cebula