Contrary to what you might have heard, the Teaching American History program is not yet dead, and with the right amount of support, may survive and even thrive.

This update from the National Coalition for History describes the current state of TAH funding. The short version is that funding was reduced by 2/3rds in the current year to $46 million (it had been at $120 million the last few years) and might be eliminated entirely next year. 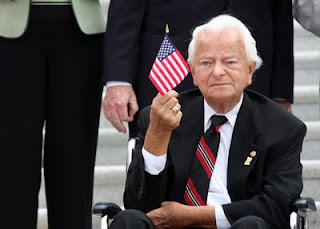 Or it might not. Some are already writing the epitaph for TAH, and it is easy to understand their pessimism. House Republicans have voted to eliminate the program. The Obama administration, and in particular Secretary of Education Arne Duncan, does not support the program. So how can it survive?

It can survive because, for the program to go away, the House and Senate will have to agree to eliminate it, and as the NCH observes, "Traditionally, there has been strong bi-partisan support in the Senate for the TAH program." Also, TAH has support from House Democrats, and many thousands of advocates across the country. Our professional historical organizations, which have in the past been largely ineffective or indifferent advocates of TAH, are beginning to wake up. If we can save TAH from being zeroed out in the current budget session, by next year we could be anticipating a new Congress that would be far more sympathetic to TAH. If we can hold the line--any line!--for another year or two, it could well become a permanent program.
The National Council for History Education has been the most useful professional organization for defending TAH, and this Call for Action [PDF] by the NCHE is still a good guide to contacting your congresswomen and men. See also this post.
Don't give up hope, and do contact your senators and representative. We can still win this one.
Posted by Larry Cebula