Historian Forges the Past, Perhaps Permanently

Washington, DC…Archivist of the United States David S. Ferriero announced today that Thomas Lowry, a long-time Lincoln researcher from Woodbridge, VA, confessed on January 12, 2011, to altering an Abraham Lincoln Presidential pardon that is part of the permanent records of the U.S. National Archives. The pardon was for Patrick Murphy, a Civil War soldier in the Union Army who was court-martialed for desertion.

Lowry admitted to changing the date of Murphy’s pardon, written in Lincoln’s hand, from April 14, 1864, to April 14, 1865, the day John Wilkes Booth assassinated Lincoln at Ford’s Theatre in Washington, DC. Having changed the year from 1864 to 1865, Lowry was then able to claim that this pardon was of significant historical relevance because it could be considered one of, if not the final official act by President Lincoln before his assassination.

NARA made an excellent short video of the discovery:

I think that NARA is handling this potential scandal exactly right by getting it all out into the open and making it a teachable moment. Over at Civil War Memory (where I became aware of this story) in the comments section Kevin Levin wonders how many subsequent historians have used this falsified document in their description of Lincoln's last days. With Google Book Search we can begin to answer the question. Lowry published his research based on the faked document in a 1999 book Don’t Shoot That Boy: Abraham Lincoln and Military Justice. In Google Books I did a search for lincoln + pardon + "patrick murphy" restricted from 1999 to 2011.

As you see there were only three hits, and one of those is Lowry's book. One of the others is Joshua Wolf Shenk's respected Lincoln's Melancholy. Shenk actually uses the false anecdote that Lowry created to offer a poignant counterpoint to Lincoln's pending assassination on the last page of the last chapter: 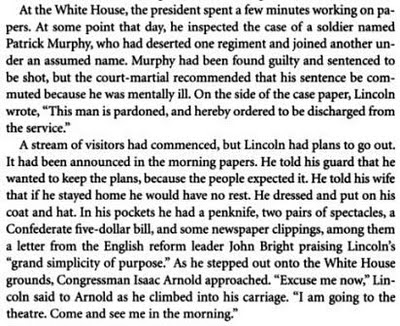 It is a wonderful piece of historical writing and it is a shame (and no fault of Shenk) that it is not true. Edward Steers makes similar use of the story in his 2005 book Blood on the Moon: The Assassination of Abraham Lincoln. "Murphy's case travelled all the way from California through the tangled military bureaucracy to reach Lincoln's desk on April 14," Steers tells us. "Lincoln studied the file and picking up his pen wrote, 'This man is pardoned and hereby discharged from service. A. Lincoln April 14 1865.' Patrick Murphy would live."

This search through Google Books is not definitive--due to copyright most recent books are available only in snippets and sections from the service and others are not available at all. Probably other recent books use the story as well. The sad thing is that now this story--doomed president granting life to a condemned soldier, only to be himself assassinated hours later--will never go away. It is in print and online, and there is no mechanism for recalling or correcting the thousands of copies of the above books. Though training and peer review should keep it out of future academic biographies, other people will find the story and repeat it in History Day presentations and seminar papers and popular biographies. Long after the disgrace of Thomas Lowry is forgotten, his rewriting of our history will endure.
Posted by Larry Cebula

Thanks for following up on those historians who utilized Lowry's research. It's a truly disturbing story.

Thank you for your good work. Such a sad story and I agree that it will remain part of the Lincoln myth forever. It will be interesting to see if it appears in the Spielberg film--it is such a poignant moment that it could be irresistible.

By the way, having seen the document I am shocked it did not arouse suspicion. Doesn't the alteration just jump off the page to you?

Candis: Well, everything jumps out at you once you know it is there!

I hope that they can restore the document (once it is proven to be a forgery) and somehow remove the ink without damaging the original.

The document, in and of itself, is important now. It's best to take the course of action that demonstrates that it has been rightfully restored to its proper place in the archives.

Perhaps they can convince Mr. Lowry to cough up the proceeds of his book to pay for that restoration.

I don't know, the forgery is now a pretty interesting historic document in its own right and a powerful teaching tool for future archivists! And putting back the "4" wouldn't really tell us anything, historically. I'd rather see the effort go into preserving endangered documents.

If it's going to be a teachable moment, could I introduce you to my good friends Paul Ricoeur and Hans Georg Gadamer?

My understanding is that they aren't 100% congruent in their definitions of the term "hermeneutic". Part of the discrepancy arises out of the fact that one of them wrote in French and the other in German.

Protestant notions of the way the past and the future are determined in the present have been known to deviate in some ways from the accepted Catholic view.

Objects in the rear view mirror may be closer than they first appear.

Mirrors are a useful device for monitoring at a glance the flow of traffic behind us. Too much attention to the details of the landscape behind us can make us oblivious to the obstacles between us and the route ahead we intend to traverse.

I visited the Lowry Index Project webpage. He's right on target with where history is going now that every Peabody and his pet human, Sherman, have nearly free access to a Wayback Machine.

Lowry's interest in the Civil War came about the same way mine did, by discovering late in life his own ancestors' participation in it. His concern for the distortions of history produced by the system of military justice are quite legitimate, dwarfing in my view the obsessions of Lincoln enthusiasts.

My own research is presently stymied by a court martial proceeding that took place in the company of the regiment in which my great great grandfather served. The court rendered its decision in April 1864 and the captain who had organized the Scott Union Rangers was dismissed. His first lieutenant resigned and I suspect he would likely have been court martialed if he hadn't. That's all I know about it because the more or less official regimental history, comprised mostly of press releases to local newspapers in that era, neglected to include any mention of the proceeding.

I've translated three Civil War poems written by the colonel who commanded my ancestor's regiment. The colonel had anticipated leading a company he had personally organized, but when he was made colonel, his first lieutenant took command as captain of that company. The commander of that company owned and ran a German language newspaper for thirty years after the war and he published a poem written by his colonel that made his former commanding officer a famous man in Germany seventy years after the war had ended. He also translated that poem into English. One of his sons married the colonel's oldest daughter. I know because I received an e-mail from their son's grandson, who was quite happy to talk with me until I let slip that his great great grandfather had resigned his commission at the time of the court martial. I got dropped from his e-mail list like the proverbial hot potato.

Lowry has spent a dozen years transcribing military justice records preserved by the National Archives. Some of those records will not have been preserved with the same level of care that was given to papers with Abraham Lincoln's signature on them.

I spent an afternoon in the records room at the Golda Meir Library several years ago looking at several hundred letters written during the Civil War by a minister to his wife and to his sister in Wisconsin. He served in the same regiment with my great great grandfather, enlisted at the same time as a replacement troop, went through the same training camp as a middle-aged family man, and to that extent his experiences and impressions would have had many close parallels with those of my ancestor. Unfortunately, the letters are largely unreadable. Paper was scarce in the field for enlisted men. When they received letters from home it was not unusual for them to reply using the same letter they'd received as stationery. Ink then had a marked tendency to run and to bleed and eventually fade. Much of what I saw was indecipherable because the reply had been written in between the lines with pen strokes often overlapping, yet because they were original documents they were listed and maintained in the archive as "priceless" keepsakes.

There was an even worse case in Britain a couple of years ago. I forget the details, but a historian planning a book about World War II forged whole documents, planted them in archives, "discovered" them, and wrote his whole book around this "newly discovered" evidence.

It's horrible to wonder how often this has been done without anyone ever discovering the fraud. I find it hard to believe these are completely isolated cases.

So I guess my question, really, is how does one get information from NARA about a particular court martial?

I used the NARA website and followed their directions for obtaining the service records and pension files for my great great grandfather, the husband of his wife's sister and his wife's younger brother. I sent them $120, two forms for each soldier with the appropriate boxes checked and a short cover letter to make the request by describing my relation to these soldiers. If one of them had been court martialed it's likely there would have been some documentation of it in the service file. Requesting information about the court martial of a soldier who is not a relative isn't a package NARA markets over the internet.

However, if you go to the Lowry website, for $50 he and his wife offer to obtain and send copies of the court martial records NARA has on file for any specified soldier. Twelve years may have been enough time for them to have copied the military service records for most or all of the Union soldiers court martialed during the Civil War.

Have they essentially privatized a key component of something the federal government maintains as a public archive? Isn't that a bigger issue than whether Lowry did or didn't deface a pardon signed by Lincoln?

My apologies to Thomas and Beverly Lowry. The rate quoted on their Index Project website for individual reports from their court martial database is $5 each, not $50, and no charge if they have nothing on file.