Update: I heard back from the curator of the museum and she really let me have it!


Note: What is the obligation of a public historian when the history you are presented at a historic site is not right? Do you smile and nod? Politely correct the presenter? The following is a real letter I sent off this week to the curators of a historic home in the American south. A few names have been changed to protect the well-meaning--my goal is not to shame the museum but to help it improve.

Thank you for the very enjoyable tour of the Baron Von Munchausen historic home today. The passion and commitment of your staff made for a terrific visit. As an academic and public historian I am fortunate to visit a lot of historic sites, and want to offer a few friendly comments, which I trust will not be taken amiss. 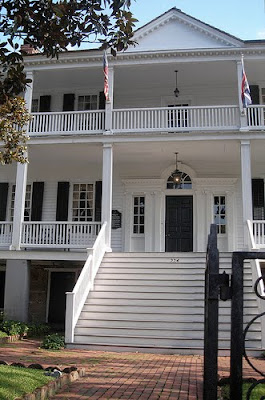 On our tour I was concerned about some of the historical "facts" presented by some of the staff.  I would like to refer you to this article from the Colonial Williamsburg foundation, Stuff and Nonsense: Myths that Should be History, which dispels some of the historical myths that  get passed down from one interpreter to the next and even published from time to time. Our guide repeated as fact five of the ten myths debunked by the article. Specifically:

Some additional questionable interpretation items from the (very nice!) person who gave us our tour include:
The biggest problem with the interpretation at the Baron Munchausen House was the absence of slavery. There was no acknowledgment that Munchausen even owned slaves. Our guide referred to the slaves who ran the house as "servants" which is whitewashing history. Our guide used the word "slave" only once in passing. Slavery was at the heart of Munchausen's world. He owned many slaves and even advertised in newspapers for the return of his runaways. Slaves built the Munchausen fortune, cooked his dinner, and kept the opulent house running. A Google Book Search for "Baron Von Munchusen" + slaves provides some resources for specific information, including names and descriptions of some of Muchausen's runaway slaves. The interpretation at the Munchausen House would be richer and more interesting if you included stories of the slaves rather than omitting them.
Thank you for all you do to preserve and welcome the public to this historic treasure. The work you do has saved an important historic landmark and serves thousands of visitors. It is because what you do is so important and so good that I offer these small corrections. Feel free to contact me if you like.
Cordially,
Larry Cebula
Posted by Larry Cebula

This is great Larry! I once sent a letter of correction to a museum, who thanked me profusely... but when I went to the museum again 2 years later, the glaring error was still on the wall.
It's a shame that docents at these types of venues often perpetuate myths in their tours: I think it contributes to turning people off history (both public and academic), when they either believe the falsehoods, or realise what they were told was wrong, and conclude "it's all nonsense anyway, what those history teachers tell you"...
And at so many historic houses, the truth is far more interesting than any folk myth!
I'd be interested to know if you get a reply from them.

I do hope I took the right tone. The docents who led our tour were volunteers who were there out of the goodness of their hearts and a passion for history. In fact the house in question was saved from destruction by the National Society of The Colonial Dames of America. Generations of volunteers saved, preserved, and keep the home open. They are to be thanked, and it is not realistic to think that the volunteers will be academically trained historians.

I know the guides at these houses are often volunteers - and some are wonderfully knowledgeable about the properties. If my comment was unclear, I simply meant that for some members of the public, museums are their main interaction with history, so it is unfortunate if misleading information is put out there.
It would be great if the directors of these properties all had the money to hire historians, but of course they don't. Even big organisations that run many properties, like the National Trust - while of course they employ historians, the docents at the various houses are still volunteers. But it might be possible for them to do occasional workshops with a public historian (such as your good self?) discussing interpretations of the property with those that guide the tours.

I have not been to this historic home, but it sounds like they need to hire an educator to get these docents on the right path. Led by the education Curator, the Wisconsin State Historical Society began three years ago to update what the museum was telling their patrons about Wisconsin Native Americans. The exhibit was built in about 1960 and the content and text labels were never updated to reflect more current scholarship. There is a lot of public history out there that needs correction, for sure.

This is a great letter and I personally feel was the best way to handle this. As someone who has been in this situation WAY too many times I can attest that "correcting" the docent while on the tour rarely ends well. With that said, many docents do it because they love history. If, after the tour, you have an opportunity to chat with them, on their own, you can sometimes correct them in a polite way. I've had many great "discussions" with volunteer docents and shared with them some of the "recent scholarship" that contradicts much of what they had just said on the tour... if it is done respectfully in a "you couldn't have know this but now we do" kind of way it can be well received.