William Cannon and Revolutionary War Veterans in the American West

A few miles to the east of where I live in Missouri is a quaint little country graveyard. I stumbled across the Cave Springs cemetery while on a fall drive a few years ago. I surprised to find one grave that held a veteran of the Revolutionary War. 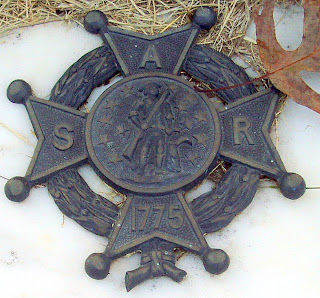 "You are a long ways from Valley Forge," I chided the old fellow (who proved a disappointing audience). On the drive home I realized that I should not have been surprised. A young man in the Revolution could easily have lived long enough to have been part of the initial white settlement of southwest Missouri in the 1830s and 40s. There must be thousands of veterans of the revolution buried across the middle west. And farther. Why a boy of 16 in 1781 who had fought at Yorktown could even have been on the Oregon Trail in the 1840s. He would have been in his seventies, but perhaps that is not impossible? It occurred to me that this was a great teaching opportunity as well. The westward movement of Revolutionary War veterans could be used to illustrate western movement and to tie it to other themes in American history. And because they were veterans, the genealogists will have located and marked their graves and put the data online somewhere. Witness the American Revolutionary War Veteran Graves waymarking page.

So did any Revolutionary soldiers make it to the Pacific Northwest? At least one did--William Cannon, Oregon's Only Known Revolutionary War Veteran. Cannon had quite the life. He fought at Charleston, one of the worst American defeats of the war. (Many American captives from that defeat ended up on British prison ships in New York harbor, but Cannon's name does not appear on the list of known prisoners.) He turns

up again in 1810 in the employment of the Northwest Fur Company at Mackinaw, where he was lured away to join the Overland Astorians in 1811. Cannon merits a brief vignette in George Washington Irving's Astoria, who describes how the hunter became the hunted when a grizzly bear discovered Cannon hauling fresh buffalo meat back to camp:

"In passing through a narrow ravine he heard a noise behind him and looking round beheld to his dismay a grizzly bear in full pursuit apparently attracted by the scent of the meat. Cannon had heard so much of the invulnerability of this tremendous animal that he never attempted to fire but slipping the strap from his forehead let go the buffalo meat and ran for his life The bear did not stop to regale himself with the game but kept on after the hunter He had nearly overtaken him when Cannon reached a tree and throwing down his rifle scrambled up it. The next instant Bruin was at the foot of the tree; but, as this species of bear does not climb, he contented himself with turning the chase into a blockade."

Presumably Cannon endured the same horrendous trek as the other Astorians across the Bitterroots and down the Snake River. He is nearly invisible in the historiography of Astorian--mentioned only once in James Ronda's Astoria and Empire and not at all in Robert Stuart's or John Bradbury narratives. But the outlines of his life can be pieced together.

Much of this piecing has been done by Tom Laidlaw, a historical reenactor whose favorite character is William Cannon. William Cannon joined the Northwest Company when the Astoria 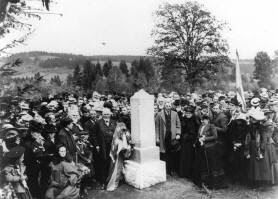 venture failed. He married a Chinook woman, worked as a millwright and blacksmith, and became a modestly important figure in early Oregon. In 1843 William Cannon was of the men who on May 2, 1843, voted to form Oregon's Provisional Government, an event commemorated by the pictured obelisk at Champoeg State Heritage Area. (A Google Books Search for "william cannon"+oregon+history turns up some additional nuggets of his history.)

A cursory search has not revealed any Revolutionary veteran graves in California, Washington or Hawaii, so it looks like William Cannon is the westernmost known veteran of the Revolution.

The life and the grave of William Cannon illustrate the speed of the conquest of the American West. A man who grew up in the Virginia of Washington and Jefferson and served his country in the Revolution also settled on the Pacific coast and helped bring one of the last major parts of the west under American control.

Interesting lore--I am a descendent of families that came West on the Oregon Trails in the 1840s. My paternal grandmother, had ten children, one of whom was my father, Irwin L. Smith, born in 1904. His father, Armand C. Smith, an orphan, married my Grandmother Smith (Yes, a Smith marrying a Smith, though not related) in 1889in the Territory of Washington. The marriage was witnessed by George Washington Smith, and my grandpaents owned land that is now in the Baskett Slough area.

Luckily, I was able to trace my ancestry officially and was a member of the Daughters of the American Revolution until I opted out in good standing several years ago, National No. 812714, Admitted on July 2, 2002. My ancestor is Edward Ballou from Rhode Island (November 24, 1756-February 22, 1833) who was a Private.

I live in Austin,Texas. Here we have a pretty busy street named William Cannon. Scince I was young I have always wonderd who he was and other streets like Sam Bass, Robert E. Lee and others. But I never found out who he is. I've asked my teachers, uncles, my Dad, everyone I could think of who might know. Nobody ever knew. Well today I rememberd always wondering who that was. So, I googled him up and found this. Hopefully this is the same man. I thank you for your time.

Looks like another American Revolutionary War veteran was located in Sonoma, CA, Captain William Smith, in Mountain Cemetery. I found a link to his page on Waymarking.com here:

I was also curious to find out any veterans from the Revolutionary War that may have settled out West. I'm hoping maybe to locate a few more in other Western states.

Tgomez, thanks for the comment. I was not aware of the California grave when I wrote this post.

A friend pointed out that it was in the early years of the Republic that Yankee traders and whalers sail out of New England ports to the South Pacific, so there are surely graves (watery graves in some instances) of veterans of the Revolution scattered across the Pacific.